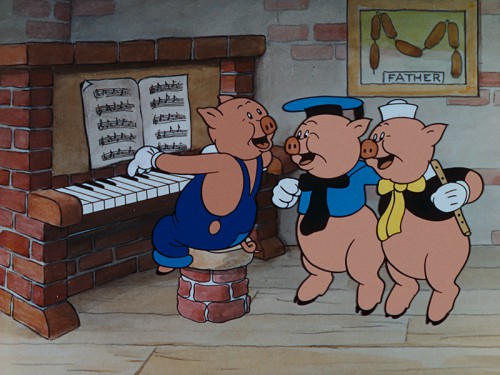 Three major Los Angeles classical music institutions closed out their 2015-2016 seasons over the past weekend. I didn’t have time to catch the Los Angeles Philharmonic concerts (you can read Mark Swed’s glowing review in the Los Angeles Times HERE) but the Los Angeles Chamber Orchestra and Los Angeles Master Chorale capped their seasons in typically first-rate fashion.

Using live orchestras to accompany movies has become a favorite programming tool for orchestras nationwide recently but the Los Angeles Chamber Orchestra has been at it for more than a quarter century. For the first 25 years, LACO accompanied silent films at UCLA’s Royce Hall, but last year it elected to dip into the Walt Disney Company vault for some of its famed cartoons for which the orchestra provided live musical accompaniment, a trickier assignment than silent movies.

Saturday LACO kept the Disney connection but shifted venues to the Orpheum Theatre in downtown Los Angeles and chose seven of Disney’s “Silly Symphony” cartoons for the program. Composer-conductor Mark Watters again manned the podium and, as is to be expected, the orchestra played splendidly, including providing a wide range of sound effects. I write, “as is to be expected,” because a huge percentage of the musicians make their daytime living by playing for orchestras in the Hollywood sound stages.

The program for this fund-raiser concert was short on music (the selections added up to less than an hour) but was, nonetheless, fascinating. For one thing, the evening demonstrated that marrying live playing to film isn’t easy. A few seconds into Saturday’s opening number, Watters’ click-track monitor malfunctioned, which necessitated everything grinding to a halt. LACO Executive Director Scott Harrison did a good job vamping while technicians replaced the monitor.

Two things were particularly noteworthy during the evening. That opening number — Overture from the 1938 short Mother Goose Goes Hollywood — included clips from all 75 “Silly Symphony” cartoons. But what was even more interesting was that the seven other selections were presented in chronological order, which allowed audience members to see the technological and animation developments over the decade from 1929 to 1939.

According to David A. Bassert’s excellent program notes, the “Silly Symphony” concept grew out of a discussion between Walt Disney and his first musical director, Carl Stallings. The idea was to create the musical composition first and then create the story and the animation. It was an idea that would reach its ultimate fruition in 1940 with the making of Fantasia.

Among the incidental intelligence from the evening:
• Flowers and Trees (1932) was the first to use the new Technicolor three-strip color process, for which Disney negotiated a contract that gave him exclusive rights to the revolutionary process through 1935.
• The Three Little Pigs (1933), arguably the most famous of the 75, included Who’s Afraid of the Big Bad Wolf, written by Frank Churchill, who would go on to write legendary songs which as Whistle While You Work and Some Day My Prince Will Come from Snow White and the Seven Dwarfs. From where I was sitting in the hall, it was hard to hear the text and singing, but at least the adults who grew up on this cartoon, it wasn’t a big deal.
• The music for The Ugly Duckling was written by Alfred Hay Malotte, whose setting of The Lord’s Prayer is one of the most famous religions songs ever written.

Given the vast amount of material in the Disney vaults, this programming concept looks as if it can continue well into the future. Frankly, it would be more interesting to see some of Disney’s full-length animation efforts, as well as the cartoons.
_______________________

LA Master Chorale Artistic Director Grant Gershon introduced the Sunday evening concert by noting that the pieces, which ranged from pre-Baroque to the present, were selected for their aural brilliance and, of course, to give Chorale the opportunity to shine.

Apparently Gershon wasn’t too concerned about the audience being able to read the lyrics since the Chorale elected not to project the words and the lights were usually too low to read the small-sized type in the printed program.

To my ears, the two opening works — Crucifixus by Antonio Lotti and Miserere, which was probably written by Gregorio Allegri (and transcribed from memory by Mozart) — and the final two pieces — Au-Delà Du ChagrinZXX by Sydney Guillaume and Moses Hogan’s eight-part arrangement of Elijah Rock — were easily the high points of the evening (literally in the case of the Miserere, which featured an octet in the top balcony behind the Chorale with a soprano who floated a high C).

The Guillaume piece’s text, written by his father, Robert — a poem entitled Beyond the Sorrow — was sensitively delivered by the Chorale, and Elijah Rock did exactly that in the lively acoustic of Disney Hall. 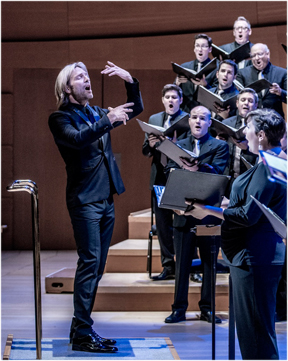 Eric Whitacre (pictured left), who becomes the Master Chorale’s first Artist in Residence next fall, gave a preview of what’s to come to when he conducted his arrangement of Enjoy the Music, which was originally written by the British synthpop band Depeche Mode. The choral version, which was released in 1990 as a single, was effective although it doesn’t really say much about where Whitacre is a quarter-century later as a composer.

He followed that with Mouyayoum, a wordless meandering of singers’ pitches by Swedish composer Anders Hillborg that Whitacre said would be 14 minutes long but, mercifully, wasn’t. I’ve never been a big fan of Hillborg’s work and this early piece did nothing to change my opinion. It must have been devilish for the Chorale to learn, although if someone made a mistake who would have known?

Lesley Leighton is stepping down after six years as the Master Chorale’s associate conductor (and even more as a singer) and she and the Chorale delivered lyrical performances of Three New Motets, written in 2006 by Steven Stucky, who passed away in February. The performances were a fitting tribute to a composer long associated with Los Angeles and a lovely swan song for Leighton, who received a thunderous standing ovation from the audience and the Chorale before she mounted the podium.

HEMIDEMISEMIQUAVERS:
• Gershon and the Master Chorale will perform Tan Dunn’s Water Passion on Friday at Chicago’s outdoor Ravinia Festival.
• One of the advantages of the Orpheum Theatre is that is can be reached relatively by public transit. Several bus lines run close to the theatre and the Metro Red and Purple subway lines stop at Pershing Square, a flat, four-block walk from the theatre.
• Disney Hall, of course, is also readily reachable by public transit. The Red and Purple lines stop at the Civic Center/Grand Park station. The only problem is that the walk up the hill from the 1st and Hill exit is very steep. When Angels Flight was running you could take that to the top of Bunker Hill and have a flat walk across plazas to Disney, but no one knows when that ancient L.A. landmark will resume operation. The Downtown Regional Connector (LINK), currently scheduled to open in 2020, will provide elevators from the 2nd/Hope St. station to Bunker Hill (next to the Broad Museum), which will make the trip even easier.
• LACO’s opening orchestra concerts for its 2016-2017 season are Sept. 24 at the Alex Theatre in Glendale and Sept. 25 at UCLA’s Royce Hall. Jeffrey Kahane will open his 20th and final season as LACO’s music director with a program that concludes with Beethoven’s Symphony No. 7. INFO
• The LAMC opens its 2016-2017 Disney Hall season on Oct. 29 and 30 with a staged production of Orlando di Lasso’s Lagrime di San Pietro (Tears of St. Peter). Gershon will conduct 21 singers and Peter Sellars offers his first production of an a cappella choral work. INFO
_______________________