“On the Road” is an occasional series on transportation — mostly public transit.

Two other notes:
1. The financial calculations in this post will vary significantly depending on whether you’re attending a Bowl concert as a single, couple or group. Moreover, I usually attend classical concerts on Tuesday and Thursday, when attendance is less than weekend events, but traveling to weekday concerts occurs during rush hour, which can be horrendous, especially around the Bowl. On the other hand, attendance at weekend events is often larger and travel times are impacted by the size of the crowds.
2. Virtually none of the issues discussed in this post can be assigned to the Los Angeles Philharmonic or other groups appearing in Hollywood Bowl. Virtually all of these issues are related to Metro, Los Angeles County and other governmental agencies. Indeed, the L.A. Phil seems to work very efficiently at moving people in and out of the Bowl and seems particularly attuned to folks with disabilities.
_______________________ 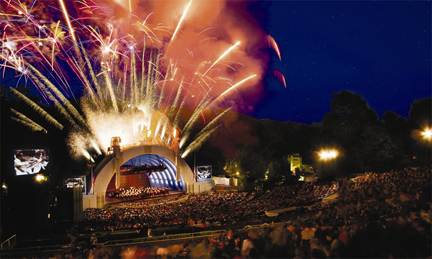 Hollywood Bowl is a worldwide iconic symbol of Southern California. It’s a great place to attend a concert, especially if you bring a picnic supper to enjoy beforehand. The Bowl’s enhanced sound system, giant high-definition digital screens and the other improved have really enhanced the concert experience, no matter whether you come for classical concerts or other events. And the fireworks are awesome!

Park and Ride
There are 14 “Park and Ride” locations throughout Los Angeles County (the Bowl is a County-run facility, so “Park and Ride” isn’t extended into other counties). Prices are $7 per person round trip if purchased in advance (but service charges apply) and $12 (cash only, exact change) at each location. You park your car, get on a bus and ride directly to the Bowl where you will be dropped off near the main box office. When the concert is over, you walk down the hill and find your bus (which may be through a pedestrian tunnel). Advantages: Cost-effective (especially if you’re a single), and you don’t have to fight the traffic. Disadvantages: The online ticketing system is difficult to use. You’re stuck at the Bowl for the duration of the event. Your bus driver is fighting the same traffic as you would in a car, so the amount of time to and from the event can add up. INFORMATION

BOWL SHUTTLE
There are five shuttle lots but the two most popular are on Ventura Boulevard west of Lankershim Blvd. and at the L.A. Zoo. At each lot, you park and board a shuttle bus to the Bowl, where you will be dropped off near the main box office. When the concert is over, you walk down the hill and find your bus (which may be located by walking through a pedestrian tunnel). Cost is $6, either online or at the lot (cash only). Advantages: Cost-effective and you don’t have to fight the traffic. Disadvantages: You’re stuck at the Bowl for the duration of the event. Your bus driver is fighting the same traffic as you would in a car, so the total amount of time to and from the event can add up. The Ventura lot may be stack parked. The Union Station and Hollywood-Highland parking structures have fees in addition to the shuttle price. INFORMATION

PARKING AT THE BOWL
There are three lots at the Bowl (lettered A, B, and C). Parking is limited and expensive ($18-$50). Advantages Once you get out of the lot after the concert (the main challenge), it’s easy to get on one of the freeway options. Consequently (absent something really unusual) your homebound travel time will probably be better than with any of the other options. Disadvantages The price is formidable and getting into the Bowl can be a real challenge. Because of the stack parking policy, you’re stuck at the Bowl for the duration of the event. INFORMATION

METRO RAIL
Metro Rail’s Red Line stops at the Hollywood-Highland and/or Universal City stations, from where you take a free shuttle bus to the Bowl. This means that the entire Metro system — particularly the other Metro Rail lines — provide easy connections to reach the Bowl. Advantages Cheapest way to travel to and from the Bowl, by far. See below for my experience with travel times. If you need to leave the Bowl early, you can walk down Highland and catch a Red Line train. Disadvantages Overall travel times can be a challenge, particularly if you add in the time to reach a Metro Rail station, where parking fees may (or may not) apply. See the story below for other issues. INFORMATION
___________________

MY METRO TEST RIDE
On Tuesday, since I was unaccompanied, I decided to test out traveling from my home in Highland Park to and from the Bowl, after driving and parking for each of the other three concerts my wife and I have attended this summer (full disclosure: as a critic, the Phil provides free parking for me, usually in Lot B. The costs in this post are based on someone who doesn’t have that privilege).

My results are pretty typical because Metro Rail schedules are usually reliable. BTW: The closest “Park and Ride facility” from my house is in Pasadena, about a 15-minute drive each way. Also, I am somewhat mobility impaired (I walk with a cane).

In the three concerts to which I drove, it took from 55 minutes to 1:15 to drive to the Bowl, park, and reach the main ticket office plaza. Coming home, the shortest time from the plaza to our home was about 40 minutes, the longest just under an hour (the differences were getting away from the stacked parking).

Getting to the Bowl
I left my house driving at 5:18 p.m. and arrived at the Highland Park Gold Line station at 5:21. Highland Park has two municipal parking lots adjacent to the station with two hours of free parking until 6 p.m. and free parking thereafter, thus I incurred no parking fees.

I caught the Gold Line heading south at 5:24 p.m. arriving at Union Station at 5:36. I walked down downstairs and caught a Red Line train at 5:42, which arrived at Hollywood Highland and ascended to Hollywood Blvd., arriving at 6:08. That total of 44 minutes is optimal; if I had arrived on the lower platform 20 seconds later I would have missed the Red Line train, and they run 10 minutes apart at that hour. So 54 minutes is more realistic.

Why not a Hollywood Bowl Red Line station?
When Metro was planning what would become the Red Line, there was talk of putting in a station at Hollywood Bowl. I guess the powers-that-be determined that putting in a station for a season that (back then) ran just three months didn’t make financial sense, but many of us believed then and do so even more now that the decision was short sighted.

One reason public transit systems in other cities are successful is because they reach facilities where large numbers of people attend events. When I lived in Montreal, that city’s Metro had a station at Place des Arts, that city’s version of the Music Center. New York, Chicago, Boston, Philadelphia, San Francisco — all of these cities have rail stops adjacent to or very close to major arts and entertainment venues.

In Los Angeles, not so much. While Staples Center, the Los Angeles Coliseum and Universal City do have Metro Rail stops located close by, venues such as Dodger Stadium, Hollywood Bowl and the Music Center are ill-served by rail transit. Instead — as with the Dodger Stadium Express and the Bowl shuttle from Hollywood/Highland — Metro and other governmental agencies rely on shuttle services to bridge the gap.

I’m all for shuttles, but if that’s the route you’re going to take, the commitment must be far more robust than it is here in Los Angeles. That means dedicated lanes for shuttle buses to run on and signal priority whenever possible. Moreover, the cost of running shuttles extrapolated over 20 to 30 years must be subtracted from the cost to build a Red Line station (and maintain it) to get an accurate picture of the true cost of building such a station.

There’s another factor in the equation. People who normally drive might — if there was a station at the Bowl — try out mass transit, especially when they realize the difficulty of driving to and parking at the Bowl. That, in turn, might encourage more of them to use transit as a viable alternative on a regular basis, to say nothing of helping to ease the gridlock around the Bowl on four to six nights a week during a summer season that now begins in early June and extends into October.

Instead, we get the following experience:

Shuttling to the Bowl
Once I arrived on Hollywood Blvd from the Red Line station, it took me seven minutes of quick walking to travel west to Orange St., north ½ block to Orange Court, and board a shuttle. That trip traverses through hundreds of people wandering Hollywood Blvd. and gawking at the footprints in front of Grauman’s Chinese Theatre (I know, it has a new name but to us old codgers, it will always be Grauman’s).

The shuttle bus left at 6:17 and took 12 minutes just to get to Hollywood and Franklin, which means it took longer to get from when I began walking on Hollywood Blvd. to reach Hollywood and Franklin than it did for the Red Line trip. Fortunately, things picked up from there and we arrived at the main box office plaza at 6:36.

By contrast, the cost to drive and park at the Bowl would have been $8.10 (15 miles times the IRS reimbursement figure of 54 cents per mile) plus $20 — at least — for parking. Using my metric above, the total elapsed transit time would have been anywhere from equal to driving or — using the fastest time — within my 50% longer factor, with a very significant cost savings.

Coming Home
I left the main box office plaza at 10:06 and walked down the hill to the shuttle, which left at 10:16 and raced down Highland Ave. stopping at the corner of Hollywood and Highland (much closer than Orange Court). I was at the Red Line platform at 10:22; however, due to typical late-night maintenance issues, trains were running with a 23-24 minute headway and the next one didn’t leave until 10:31, arriving at Union Station at 10:59. It took seven minutes to walk to the Gold Line station, where there was another seven-minute wait for a train headed north. That train arrived at Highland Park at 11:29 and I arrived home at 11:33.

Total trip from box office to home: 1:27, or just about the same as the other direction (what we gained in the short shuttle run we lost on waiting for trains). Total cost: Driving and parking for a non-senior would have been the same as going ($8.10 vs. $3.50). Costs for two seniors at night would be 70 cents!

SOME THOUGHTS FOR METRO MANAGEMENT
If you want people to use Metro when they go out at night, you’ve got to find a way to run trains more often later into the night and do maintenance closer to when trains do actually shut down. If it wasn’t for the incredibly short shuttle ride down the hill, the total travel times would have exceeded my 1:2.0 ratio, that is to say, be well beyond my tolerance limit.

SUMMATION
As is obvious, I’m a big public transit advocate but it’s easy to see why people do everything they can to avoid using it, even if driving is expensive and time consuming. Part of this — as with the case with grade-separated crossings on the Orange Line and signal prioritization on all of the light rail and express bus lines — can only be solved by public policy changes. However, some of the problems — maintenance schedules (including broken escalators, such as the one going up at Hollywood and Highland) and where stations are located are solely within Metro’s purview. The entire system can, and should, be better.
_______________________