Wynton Marsalis might be considered the Mozart of our generation. Most people think of him as a trumpeter (both in jazz and classical music), just as many in Mozart’s era thought of him as a child pianist. However, Marsalis is also a teacher, music educator and artistic director of “Jazz at Lincoln Center” in New York City.

He is also a significant composer. His Blood on the Fields became, in 1997, the first jazz piece to win a Pulitzer Prize in Music. The Los Angeles Philharmonic, under then-Music Director Esa-Pekka Salonen, recorded Marsalis’ 2002 oratorio All Rise, and the LAPO gave the West Coast premiere of his 2010 Swing Symphony. 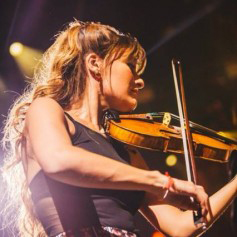 Not until last year had Marsalis written a piece for solo instrument and orchestra, but last night at Hollywood Bowl the L.A. Phil gave the West Coast premiere of his Concerto in D for violin and orchestra (the Phil was part of the commissioning team). The world premiere was in London last November. The U.S. premiere was two weeks ago at Chicago’s Ravinia Festival. The piece was written for Scottish-born violinist Nicola Benedetti (pictured left) and she was on hand last night to play it magnificently.

To say that the 38-minute work is eclectic would be to radically understate all that Marsalis has thrown into it. In an interview with Music Critic John Rhein of the Chicago Tribune, Benedetti — who turned age 29 last week — said, “Wynton is funny and quirky, and there are so many little moments of humor and color in [the piece]. I would encourage people to go along for the ride and have fun.” It was good advice.

Moreover in the first 23 bars are the following notations: from nothing, with gravitas, angsty, with purity, genuflect, freely, become more angsty, peaceful, with optimism, sweetly, sexy and throaty — essentially one for every two bars. Believe it or not, Benedetti pulled off all of these wonderfully, not an easy task since Marsalis had her soaring into the stratosphere throughout most of the performance, in the process nearly wearing out her violin’s E string while delivering a silky, singing tone.

Despite the above notations, the work is not a jazz concerto. It draws its influences from virtually every segment of American music, so it might well be considered an American concerto. Because there is so much embedded in its pages, it’s also a work that would benefit from hearing it multiple times, so it will be interesting to see if it catches on and, in particular, whether other violinists will want to put in the sweat equity to learn and perform the piece — the soloist plays in virtually every measure.

Among the takeaways: the opening, with Benedetti beginning plaintively and then building for those aforementioned 23 bars before the orchestra enters; the goofy accompaniment in the second movement, with Benedetti’s long hair whirling in the air as she negotiated the pyrotechnic solos; the Blues section, which was the most jazz-influenced (to my ears), with its lyrical inner section leading into the Hooteanny movement, where orchestra members not otherwise engaged were clapping enthusiastically (it was so infectious that I would have joined in but wouldn’t have known when to stop.

Cristian Măcelaru provide to be an inspired choice as the evening’s guest conductor, since before turning to conducting he was a good enough violinist to earn a Master’s degree in violin performance (along with one in conducting) from Rice University; become the youngest concertmaster in the history of the Miami Symphony (he made his Carnegie Hall debut with that orchestra at the age of 19); and play in the first violin section of the Houston Symphony for two seasons. For good measure, he joined Benedetti in the U.S. premiere of Marsalis’ concerto two weeks ago at Ravinia. So it was no surprise that he accompanied Benedetti sympathetically and the orchestra took the many musical mood shifts easily in its collective stride.

Măcelaru also proved to be a canny programmer, surrounding the concerto with two Aaron Copland works — canny because Copland was among the many influences heard in the concerto, especially in the last movement.

The program opened with An Outdoor Overture, which featured elegant solo work from Principal Trumpet Thomas Hooten. The piece was written in 1938 for the High School for Music and Art in New York City, which obviously had a top-flight orchestra, and came at a time when Copland was developing what would be his signature musical style just as we was beginning to write his ballet music.

After intermission, came Copland’s Symphony No. 3, which was begun in 1944 and finished two years later. This might be considered the ultimate result of Copland’s musical style-change begun in 1938, and Măcelaru led a robust rendition, allowing the composer’s music to make its own statement. Even the “Fanfare for the Common Man,” which opens the final movement, was almost understated but never dull. The orchestra’s brass and percussion players highlighted the performance.

During the final movement as the flutes were softly playing, there were birds on the hillside that seemingly were singing along. It could only happen at the Bowl.

HEMIDEMISEMIQUAVERS:
• Măcelaru — who, among his other gigs, is resident conductor of the Philadelphia Orchestra — is scheduled to conduct the San Diego Symphony on January 16 and 17. The SDS is searching for a replacement for outgoing Music Director Jaha Ling, and San Diego might be a perfect spot for Măcelaru to continue his upward career ascendancy if he’s willing to relocate from Philly.
• A Chorus Line plays this weekend at the Bowl. An oddity is that while the program book gives bio information on virtually everyone involved in the production, there’s not one word about the team that created the musical in the first place: Director and Choreographer Michael Bennett, Authors James Kirkwood and Nicholas Dante, Lyricist Edward Kleban, and composer Marvin Hamlisch, who won a Pulitzer Prize in 1975 for the score. Sic transit Gloria. INFORMATION
• L.A. Phil Music and Artistic Director Gustavo Dudamel returns to the Bowl on Tuesday, leading the orchestra in a program of Latin American music, featuring the world premiere of Concerto de la Amistad by Lalo Schifrin and dance music by Piazzolla and Ginastera. INFORMATION
_______________________