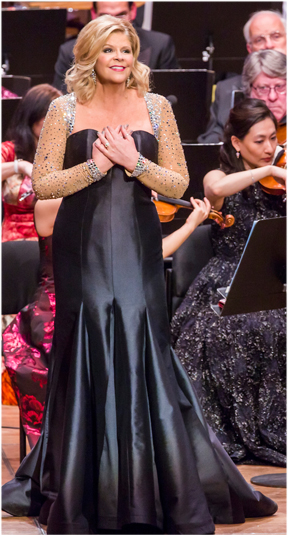 In an article in the Hollywood Bowl program magazine, Nicholas McGegan — who is celebrating 20 years of conducting at the Bowl — told Dennis Bade: “We settled on Handel for this summer once we confirmed that Susan Graham was available.”

Good thinking, Nick. At age 56 the Roswell, NM native (pictured left) is at the peak of her career, which includes roles ranging from Monteverdi to Jake Hegge’s Dead Man Walking. She brought to the Bowl last night arias from two Handel operas and sang them magnificently. In the process she managed to make the cavernous Bowl seem like an intimate recital hall. It’s a shame more people didn’t attend.

Graham looked as gorgeous as she sang, wearing a multi-colored robe over a simple black dress in the first half when she sang Scherza infida and Dopo notte from Ariodante. Post intermission she switched to a stunning, shimmering turquoise robe and sang Ombra a mai fù and Se Bramate from Xerxes.

Throughout the performances, she held the audience spellbound with her amazing runs and melismas, but she did more than simply sing the parts. In the first half she was the title character, displaying a full range of emotions from despair to laughter; in the second half, she laid into Se Bramate with all the anger she could bring to a non-staged performance. However, for this listener, the highlight was the amazing pianissimo she dared to float at the beginning of Ombra a mai fù, the note hanging in the night air as clearly as if she was singing in Walt Disney Concert Hall.

McGegan and the Los Angeles Philharmonic accompanied Graham sensitively although — truth be told — she was, in every sense, the central focus. The ebullient McGegan surrounded Graham with several well-known Handel works, taking full advantage of 79 voices of the Los Angeles Master Chorale in the opening work, Zadok the Priest (aka Celebration Anthem No. 1). The Chorale sang superbly and the amplification was so much on the singers as to virtually obliterate the orchestra, which was just fine by me.

The first half closed with Awake the Trumpet’s Lofty Sound from Samson, which found the chorus playing off beautifully against Principal Trumpet Thomas Hooten, although the work was so short that the audience didn’t realize it was over until McGegan turned around and indicated that it was okay to clap, which they did.

McGegan and the orchestra offered a spritely performance of The Arrival of the Queen of Sheba from Solomon to bring Graham onstage for her first-half numbers. Post intermission, McGegan used breathless tempos in the Suite No 2 from Water Music and Music from the Royal Fireworks, which the orchestra handled with its customary aplomb.

In past years, actual fireworks have accompanied that latter piece but, given the high fire danger and with news of the I-15 fire on people’s minds, it was probably just as well that the Phil elected to eschew the pyrotechnics. No need to repeat the premiere performance on April 27, 1749 when a 100-foot-high and 400-foot long tower burst into flames, causing the crowd to panic with, reportedly, at least two people killed.

Instead, McGegan closed the evening by leading the orchestra and Master Chorale in a lightning-fast rendition of the chorus, Hallelujah, from Messiah. Only ensembles as great as the Phil and Master Chorale could have handled these tempos, but McGegan added some nice dynamic layering to the performance just to keep everyone on their toes.

HEMIDEMISEMIQUAVERS:
• Tomorrow’s program features McGegan leading the LAPO in Weber’s Oberon overture and Schumann’s Symphony No. 3 (Rhenish), along with Mozart’s Piano Concerto No. 20, K. 466, with Garrick Ohlsson as soloist. The program is a collaboration with the J. Paul Getty Museum, which is holding a retrospective of paintings by Théodore Roisseau through Sept. 11. Videos created in conjunction with The Getty will introduce much of the music. INFO
• On Sunday cellist Yo-Yo Ma and his Silk Road Ensemble returns to the Bowl for a program of music spanning the globe — no surprise, since the ensemble is comprised of performers and composers from more than 20 countries. INFO
_______________________