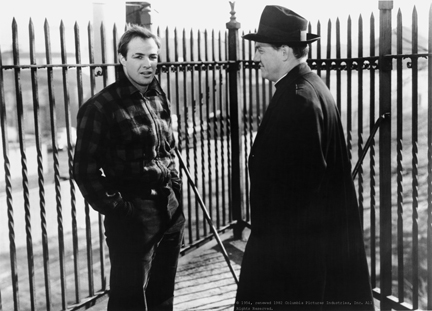 Marlon Brando (left) won a Best Actor Oscar for his portrayal of Terry Malloy in “On the Waterfront.” Karl Malden should have won the Best Supporting Actor for the role of Father Barry but didn’t (he was one of three men nominated — the others were Lee J. Cobb and Rod Steiger. They undoubtedly split the vote and the statuette went to Edmond O’Brien won for “The Barefoot Contessa”).
_____________________

If your goal was to hear Bernstein’s gritty, dramatic music full throat while, incidentally, seeing director Elia Kazan’s gripping treatment of crime and mob influence on the New York docks, then the evening was a rousing success. If, on the other hand, you wanted to see the film with the score integrated into the movie, the evening was probably less successful.

The film is one of three being screened this weekend as part of the orchestra’s in/SIGHT series. It also marked the beginning of a three-year collaboration between the Phil and the Academy of Motion Picture Arts and Sciences with the orchestra playing the scores live while the movies are shown on a large screen suspended above the ensemble. My preview story is HERE.

Owing to previous commitments I was unable to see Rebel Without a Cause Thursday night and won’t be at Casablanca tomorrow afternoon, either. Others who are seeing all three films will have to judge as to whether the issues that emerged last night will also appear in the other two films. My guess is they will.

In one sense On the Waterfront was a perfect choice for this format, since Bernstein’s 50-minutes of music is less than half of the picture’s 108-long run time (there was also an intermission last night). Long stretches of the movie, therefore, have no music underlay. However, when the orchestra was playing the score it so overpowered the actors onscreen that captions were not only welcome, they were a necessity.

Although On the Waterfront was released by Columbia Pictures, it was an independent film produced by Sam Spiegel, one of many he made in the 1950s and 1960s (others included Bridge On the River Kwai and Lawrence of Arabia, all of which won Oscars for Best Picture, making Spiegel the only person to win three Best Picture statuettes).

Needing a big name for the box office, Spiegel tapped Bernstein, who wrote what would be his only score composed expressly for a movie, although On the Town and West Side Story were adapted for the big screen. Rumor exists that Bernstein was disenchanted with the fact that director Kazan excised two segments of the score and that led to the composer’s decision to forego writing for another motion picture.

In the preconcert lecture last night, composer Laura Karpman — who has written for film, television, video games, theater, and the concert hall — said that’s the way films work; the director has the ultimate say and you know that going in.

Newman and the orchestra played the score powerfully and with their customary excellence last night. What Bernstein wrote was typical of Lenny: jazz and blues influenced, gripping, craggy and sweeping in its scope and the orchestra put all of that front and center.

As Karpman noted, seeing a movie like On the Waterfront with an orchestra playing the score live is similar to seeing a Wagnerian opera where the music often overpowers whatever is on stage. That was the case last night. However, for those who have seen On the Waterfront only on a television screen, viewing it in Disney Hall with a live orchestra was surely a revelation on several levels.

Moreover, whether Bernstein was, indeed, disenchanted with not having control of the score in the final movie or whether he feared what happened to Leonard Rosenman after the latter scored Rebel Without a Cause (“Back in the day when you went to Hollywood — for whatever reason,” said composer-conductor Scott Dunn in the Phil’s program notes for Thursday night’s screening, “you were just labeled and that was it”), Bernstein’s one film score was a masterpiece, as last night demonstrated anew.

HEMIDEMISEMIQUAVERS:
• Eva Marie Saint, who won a Best Supporting Actress Oscar for her role as Edie Doyle, introduced the film last night, reminiscing about how she felt as she made what was her film debut. It was Saint’s only Oscar and was one of eight the movie captured that year. We should all look and sound as good as Saint when we are 92 years old.
• Casablanca screens tomorrow at 2 p.m. in Disney hall with Newman conducting the L.A. Phil as it plays Max Steiner’s score. Noted film music author Jon Burlingame delivers a preconcert lecture at 1 p.m. Information: www.laphil.com
_______________________