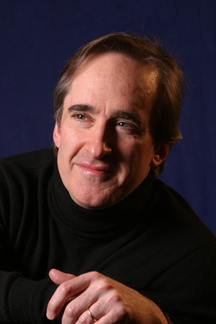 With no fanfare, merely a simple media release, Los Angeles Opera took a supremely important stop in its growth by announcing that Music Director James Conlon (pictured right) has renewed his contract for an additional three years, through the 2020/21 season (click HERE for the release).

While General Director Plácido Domingo is the best-known figure in LAO management (more for his legendary singing career and his ability to draw other major singers than for his administrative abilities), Conlon — now in his 10th season at LAO — and President and Chief Executive Officer Christopher Koelsch are equally important — many would say more important — than Domingo for the company’s long-term growth and success. Last year Domingo re-upped his contract through the 2021-22 season.

Domingo understands Conlon’s importance. “It is impossible to overstate what a profound impact James Conlon has made during his ten years in Los Angeles,” said Domingo in the release. “I am thrilled that James will continue to shape the company’s artistic legacy for many years to come, for he has truly become an essential member of the LA Opera family.”

Thus, with companies such as New York City’s Metropolitan Opera and San Francisco in transition, it is significant that L.A. was able to keep Conlon, now age 66, on board. He will continue as Principal Conductor of the Italian RAI National Symphony Orchestra in Turin, a post he assumed last year.

It is Conlon who directs the majority of the company’s main-stage productions (this season he leads four of the six offerings at the Dorothy Chandler Pavilion) and offers erudite preconcert lectures before each performance. However, his involvement doesn’t stop there.

Conlon will lead a revival of Benjamin Britten’s Noye’s Fludde on May 6 at the Cathedral of Our Lady of the Angels in downtown Los Angeles as part of the company’s “Community Opera” program.

Moreover, on Feb. 3 at The Colburn School’s Zipper Hall, Conlon will conduct the Pittance Chamber Ensemble (comprised of member’s of the LA Opera Orchestra) in a program of Mozart’s Serenade in B flat (Gran Partita) and Octet for Strings in E flat, Op. 20. (INFORMATION)

Conlon’s next Pavilion appearances will be to lead performances of Mozart’s The Abduction from the Seraglio beginning Jan. 28 and Richard Strauss’ Salome, beginning Feb. 18 (INFORMATION)
________________________