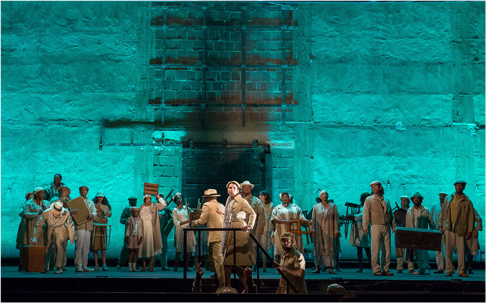 Entrance scene of “Lost in the Stars,” the opera/musical theater piece by Kurt Weill and Maxwell Anderson, presented last night in UCLA’s Royce Hall as the conclusion of Los Angeles Chamber Orchestra’s “Lift Every Voice” festival. Photo by Reed Hutchinson.
___________________

Perhaps the most amazing thing about Kurt Weill and Maxwell Anderson’s Lost in the Stars, is that the searing work has been lost from Los Angeles for 67 years. The performances Saturday and last night in UCLA’s Royce Hall were the first professional presentations since Los Angeles Civic Light Opera mounted the work in 1950, a year after the piece’s Broadway debut and the year that Weill died of a heart attack at age 50.

Moreover, the opera/musical theater piece wasn’t presented this time by LA Opera, nor by the Los Angeles Philharmonic, nor even by the intrepid Long Beach Opera. Instead, it was mounted by a collaboration of the Los Angeles Chamber Orchestra, Center for the the Art of Performance at UCLA, and SITI Company. SITI’s leader, Anne Bogart, directed the production, with Jeffrey Kahane leading a trimmed-down LACO in the pit.

Lost in the Stars was the concluding program in “Lift Every Voice, LACO’s 15-day-long series about civil rights and injustice (LINK). The piece is based on Alan Paton’s famous anti-apartheid novel, Cry, the Beloved Country, which was published in 1948, four months before South Africa’s separatist National Party came into power and established the brutal system of apartheid. 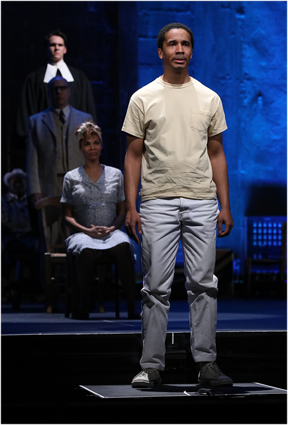 (Absalom Kuvalo [Samuel Stricken] on trial for murder in Kurt Weill and Maxwell Anderson’s opera/musical theater piece “Lost in the Stars,” presented at UCLA’s Royce Hall last night. Behind him is Lauren Michelle as his wife, Irina, and Christopher Hunter as the Judge. Photo by Reed Hutchinson.)

There are distinctive overtones of Porgy and Bess to Lost in the Stars. As was the case with Porgy, questions raged from the beginning as to whether Lost was an opera or Broadway musical. Weill believed that Porgy was musical theater and should be performed with spoken dialogue, rather than with sung recitatives and that’s how Lost in the Stars was conceived. Yet, when it opened on Broadway on Oct. 30, 1949 it was part of a season of “Opera on Broadway.”

That Lost in the Stars is rarely performed is no surprise, given its complexity. As is the case with Porgy and Bess, the principal singers and much of the chorus are African-American. The production was sung in English without captions or supertitles and the singers’ diction ranged from excellent to mostly understandable.

Lost has five principal singing roles, five principal actors (in this case) portraying 14 different roles, and 27 different singers from the Albert McNeil Jubilee Singers and Los Robles Master Chorale who sang and dance various roles and acted as the chorus. Just to put the production together was a significant feat. The ensemble spent three weeks in rehearsals.

Although Weill scored the piece without violins and called for just 12 musicians in the pit (members of the woodwind section played several instruments in the original production), Kahane used 21 musicians in this production. They played superbly with verve and Kahane led a sensitive, yet spirited performance. 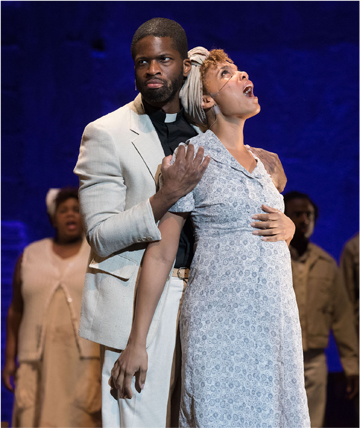 The cast for this performance was dominated by Justin Hopkins (pictured left), who delivered an impassioned performance as The Reverend Stephen Kumalo, the black priest who travels from his hometown hundreds of miles to Johannesburg in search of his son, Absalom, and Lauren Michelle as Irina, the woman who is bearing his child. Meloney Collins sang and slinked the role of Linda and the clarion voice of Issachah Savage (pictured below) rang out as chorus leader/narrator. 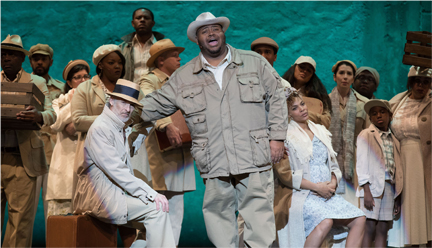 Issachah Savage and the chorus were an integral part of last night’s production of “Lost in the Stars.” Photo by Reed Hutchinson.

The plot synopsis is HERE. When Stephen Kumalo arrives in Johannesburg, he discovers that his son has been involved in a botched robbery-turned-murder and, unlike his two compatriots, refuses to lie by pleading not guilty (there were plenty of jibes at lawyers and the legal system — not much has changed in the last six decades).

Kumalo pleads with the murdered boy’s father to plead for Absalom’s mercy before the court, but the father refuses to do so. The play turns on how the two fathers find ways to reconcile their paths and forgive each other. The themes of anger, racial fear, murder and forgiveness are universal, which is why Lost in the Stars remains as relevant today as it was when it opened in 1949.

When Lost in the Stars went on a national tour following its Broadway run of 286 performances, the tour ended, in part, because African-American performers could not stay in the same hotels as the white cast. Although much has changed in the ensuing 60+ years in America, the thought-provoking story of this work deserves to be heard on a much broader scale than the 3,000 or so who heard this presentation at Royce Hall this weekend.
________________________