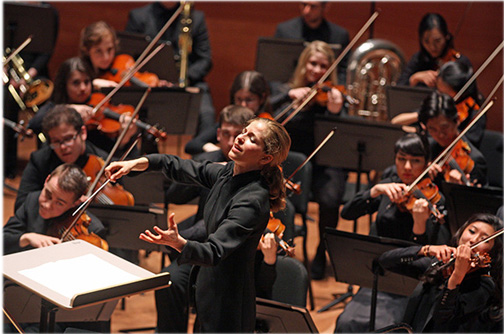 Signs of the time?

Earlier this week I previewed the upcoming Hollywood Bowl classical season (LINK), noting — among other things — an increase in motion pictures accompanied by the Los Angeles Philharmonic. A second look offers some other interesting thoughts about this season, and in particular, what we don’t get this summer:

No Mahler works
Not one!

No semi-stage opera
Instead, we get an evening of Wagner choral and orchestral works on July 20, with Dudamel leading the Phil and L.A. Master Chorale, a performance of Sondheim on Sondheim on July 23, with conducting, and the Broadway evergreen hit Mama Mia! on July 28, 29 and 30.

One Tchaikovsky symphony
No. 5, on July 27 conducted by Rafael Payare making his Bowl debut. Payare is another graduate of Venezuela’s El Sistema program (which also produced Gustavo Dudamel), winner of the 2012 Malkio conducting competition, and is now chief conductor of the Ulster Philharmonic in Northern Ireland.

One Beethoven piano concerto
No. 1, on Aug. 31, with Pierre-Laurent Aimard as soloist and Bramwell Tovey conducting

One Rachmaninoff piano work
Concerto No 3, on August 15, with Behzod Abduraimov as soloist and Krzysztof Urbanski conducting.

One Gershwin program
Without Rhapsody in Blue, although it does close with An American in Paris — on Aug. 17, with Bramwell Tovey

Two Beethoven symphonies
• No. 9, on July 13 and 18, with Gustavo Dudamel conducting
• No. 3 on Aug. 31, with Bramwell Tovey conducting
I can’t remember a season without either the fifth or sixth symphonies.

Two Tchaikovsky concertos
• Piano Concerto No. 1 on Aug. 1, with Beatrice Rana as soloist and Mirga Gražinytė-Tyla conducting
• Variations on a Rococo Theme, with Thomas Mesa as soloist, as part of “Tchaikovsky Spectacular” concerts on Aug. 18 and 19

Among “traditional” works NOT being presented: Violin concertos by Brahms, Beethoven, Sibelius and Tchaikovsky, Gershwin’s Rhapsody in Blue,, Stravinsky’s Rite of Spring, Vivaldi’s The Four Seasons. And, of course, little — if anything — that appropriates that woefully neglected genre: “light” classics.

There’s no nothing to celebrate Leonard Bernstein’s upcoming centennial.

Things we do get:

• A full night of Vivaldi, with Simone Porter soloing in the Violin Concertos, Op. 4, Nos. 3 and 4, and the Pacific Chorale joining forces with Nicholas McGegan for Stabat Mater and Gloria.

• A smattering (just a smattering) of Mozart: his Requiem on Aug. 24, paired with John Adams Harmonimum, with Dudamel conducting the LAPO and L.A. Master Chorale; and an all-Mozart program led by McGegan on the final classical night of the season, Sept. 14.

• The Bowl debut of conductor Karina Canellakis (pictured at the top of this post), who (one hopes) is on a very short list of conductors to replace Jeffrey Kahane after he retires this season at the Los Angeles Chamber Orchestra. She makes her Bowl debut on Aug. 8 in an all-Mendelssohn program. Canellakis, winner of the 2016 Georg Solti conducting competition, came to national attention when she stepped in not once but twice to replace Jaap von Zweden in Dallas Symphony concerts. My guess is that the San Diego Symphony, which is looking to replace Jahja Ling as music director.

One thing I wish had been programmed:
Either John Adams’ Harmonielehre or City Noir.

As indicated before, Bowl subscription tickets, in a variety of combinations are now on sale. Single tickets go on sale May 7.