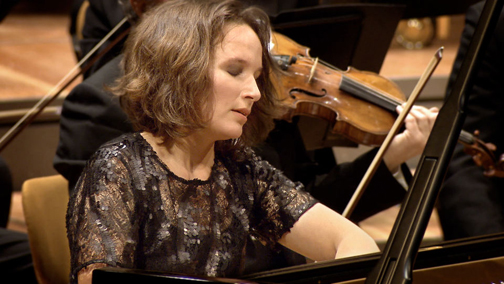 Hélène Grimaud was the soloist today with the Los Angeles Philharmonic in Walt Disney Concert Hall (photo from a 2015 concert in Berlin).

Among other things this weekend’s Los Angeles Philharmonic concerts at Walt Disney Concert Hall offer some insight into the art of program design. Three pieces: one about 12 minutes, one about 15 and a third about 50.

Simple, right? The 50-minute piece — in this case, Brahms’ second piano concerto, with Hélène Grimaud as soloist — finishes the concert post-intermission, right? However, the 12-minute piece is a world premiere — Unchained by James Matheson — which means that opening the program with this work risks the possibility of plenty of folks waiting to show up until the other work: Ravel’s Daphnis and Chloé, Suite No. 2. 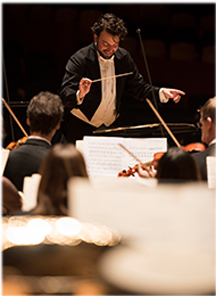 So, guest conductor James Gaffigan (pictured left) elected to open the program with the concerto, which created an additional problem: there was an uncomfortable pause between the first two movements to seat latecomers. In fact there were very few laggards this morning and the house was nearly full but, as I said in my review of last Saturday’s Pasadena Symphony concert, there may come a day when some group will make those who can’t make the starting time (10 minutes after the appointed hour today) wait until the first piece is done, not just the first movement.

That pause is particularly egregious in Brahms’ second piano concerto because the first two movements have similar characteristics — in fact, I can remember a concert where the conductor paused just one second between movements. This morning, Gaffigan and Grimaud waited patiently and then plunged back into the music.

Grimaud, who recorded both of the Brahms concertos in 2013 and is touring currently with No. 2, offered a superb rendition this morning: a winning blend of majesty, subtlety and even a little humor (a couple of times Gaffigan grinned as she slipped in a sneaky little pause at the end of a phrase). More than anything, what impressed me was the sonorous tone she produced on the Phil’s Steinway, even in the rapid-fire Rondo movement that concludes the piece.

Gaffigan was equally impressive in shaping the accompaniment. This was a robust performance but it never seemed to be overly rushed, even in the finale. Now in his late 30s, Gaffigan — who recently extended his contract as Chief Conductor of Switzerland’s Lucerne Symphony until 2022 — continues to impress with his ability to bring out the best in the Phil, not an easy task for a guest conductor. Even in an ultra-familiar work like the Ravel, he seems to find a way to put his own stamp on the piece and that was also the case in the Brahms, a work in which the orchestra has as big a part as the pianist.

Of course it helps when the orchestra is playing as well as the Phil did this morning. Principal horn Andrew Bain began the concerto with an elegant solo (kudos, also, to third horn Amy Jo Rhine, who got in her own lovely solo licks later in the piece) and Principal Cellist Robert deMaine delivered an elegant solo in the concerto’s third movement. In the Ravel, Principal Flute Denis Bouriakov led the way, but the entire wind section was in top form throughout.

As it turned out, the backstory of Matheson’s premiere piece was more interesting than the work. He choked up during the pre-concert lecture when he explained to host Daniel Kessner and the audience that the work’s genesis began 21 years ago when he was studying with Steven Stucky at Cornell University. He befriended a young African-American resident of Ithaca, New York, which is home to Cornell and Ithaca College, but later — for unexplained reasons — had him arrested.

The outcome, which Matheson believes was a disproportionate sentence, and the composer’s own recent brush with the law, led him to write the single-movement work. The young man involved in the story is scheduled to be released Monday from a mental-health facility that has served as a halfway house to help him transition back into society. All of this, writes John Henken in his program note (LINK), gives the work “both its moments of release and its taut-but-unsettled forebodings,” as well as its title, Unchained.

Those “taut-but-unsettled forebodings” did permeate most of the work and it’s certainly accessible in terms of its musical style, but I was left with a sort of “meh” feeling at the conclusion. The audience gave the performance, which Gaffigan led without a baton, a tepid round of applause.

Hemidemisemiquavers:
If you’re into compare and contrast, Yuri Temirkanov and the St. Petersburg Philharmonic will conclude their concert on March 15 in Costa Mesa’s Renée and Henry Concert Hall with Ravel’s Daphnis and Chloé, Suite No. 2. INFORMATION.
• Gaffigan will be on the run for the next few weeks. He returns to Europe for a month of concerts after his Phil performances, then conducts the Vancouver Symphony April 1, 2 and 3 in a program that concludes with Bruckner’s Symphony No. 7. Why is that important? The Vancouver ensemble is searching for a replacement for its retiring Music Director, Bramwell Tovey. Earlier this year, Gaffigan conducted the San Diego Symphony, which is also in a Music Director search. Either would be lucky to nab Gaffigan.
________________________