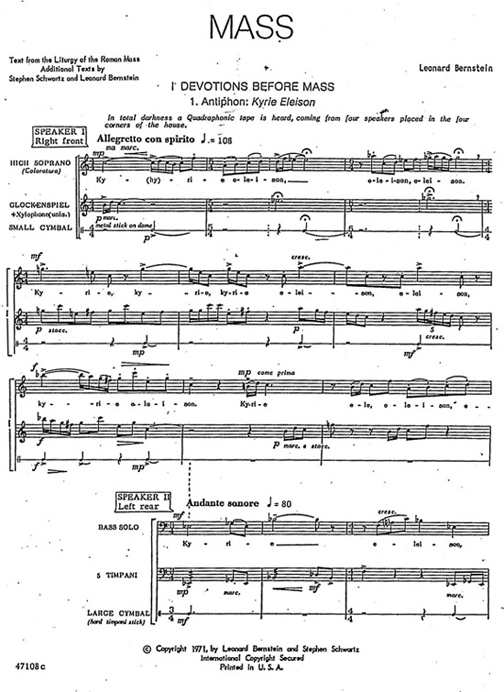 Leonard Bernstein’s “Mass” will be part of the Los Angeles Philharmonic’s 2017-2018 season. The above image is the first page of the work, which is subtitled “A Theatre Piece for Singers, Players and Dancers.”

In PART 1 of this post, I discussed some of the people and ensembles who will be performing in the Los Angeles Philharmonic’s 2017-2018 season, the orchestra’s 99th. In this portion, let’s unpack some of the programming that will take place during the season’s nine months, which as I said in Part I, “is the most exciting, interesting collection of programs that I can ever remember from an orchestra.”

There’s enough familiar music sprinkled throughout the season to keep even the most dyed-in-the-wool traditionalist from revolting. The season will begin with a gala concert on Sept. 26 and two weeks of subscription concerts beginning Sept. 29 featuring music written by Mozart in 1791, the last year of his life. This is, apparently, a Mozart year for LAPO Music and Artistic Director Gustavo Dudamel, who will also conduct Mozart’s Requiem this summer in Hollywood Bowl.

The season will conclude with Dudamel leading a three-week cycle of music by Robert Schumann, including all four symphonies, and the piano and cello concertos. The final concert will be the rarely performed oratorio Das Paradies und Die Pierl. Peter Sellars and video artist Refik Anadol will stage the oratorio in a production inspired by China’s Dunhuang Caves, which reportedly were Schumann’s inspiration in writing this work.

In between the beginning and ending concerts will be three Beethoven symphonies (Nos. 2, 7 and 9), Berlioz’s Symphonie Fantastique, plenty of Brahms, three Mahler symphonies and other familiar works.

BTW: this is an unusually strong year for choral works. In addition to the Schumann oratorio, the season includes Mozart’s Ave Verum Corpus; Leonard Bernstein’s Chichester Psalms and Mass; a world premiere by Andrew Norman; and Beethoven’s Symphony No. 9.

However, this is a season that skews heavily toward music written in the 20th century and later. Lisa Hirsch writes on her Blog, “Iron Tongue of Midnight,” that among the 81 composers on the schedule for the various components of the Phil’s season, 31 of them are alive and at least 17 others were composing in the 20th century.

The LAPO’s media release lists 23 commissions, 22 world premieres, six U.S. premieres and two west coast premieres during next season. Obviously, some of those will appear in the “Green Umbrella” series and five of the premieres will take place during a reprise of this seasons’ “Noon to Midnight” on Nov. 18, but contemporary works abound throughout the season.

The Phil’s conductor laureate, Esa-Pekka Salonen, will be spotlighted not just as a conductor but also for his compositions. On Feb. 8 he will conduct the west coast premiere of his Cello Concerto, with Yo-Yo-Ma. The Feb. 9 and 10 programs will feature Salonen’s Piano Concerto, with Yefim Bronfman as soloist, and the Feb. 11 will feature violinist Leila Josefowicz as soloist in Salonen’s Violin Concerto. All three of the concerts will conclude with Beethoven’s Symphony No. 7.

The following weekend, Salonen will conduct the revised version of his Wing on Wing, which was written for Disney Hall, along with selections from Mozart’s The Impresario, K. 486 and Beethoven’s Violin Concerto.

Since 2018 is the centennial of Leonard Bernstein’s birth, it should be no surprise that his music will be well represented: Serenade (after Plato’s “Symposium”), Chichester Psalms, (paired with Beethoven’s Ninth), and Mass, which is subtitled “A Theatre Piece for Singers, Players and Dancers” and was written in 1971 for the opening of the Kennedy Center in Washington, D.C. All of these, except for Serenade, will be conducted by Dudamel.

The performances of Mass present an interesting scheduling conumdrum because the dates (Feb. 1, 2 3 and 4) overlap LA Opera’s performances of Bernstein’s Candide. In fact, on Saturday, Feb. 3, while Candide is playing in the Dorothy Chandler Pavilion, Mass will be performed across 1st St. at Disney Hall. Fortunately, Candide has enough dates so that Bernstein lovers can work around the conflict.

Screenings of the 1961 movie of Bernstein’s West Side Story on Nov. 24 and 26 will round out the Bernstein celebration. This will be one of several movies that will appear on the schedule as part of the Phil’s inSIGHT series. Another in that series will take place on Feb. 28 (the Wednesday before the Oscars) when Thomas Wilkins, principal conductor of the Hollywood Bowl Orchestra, will lead the Phil as it plays portions of the the nominated scores accompanied by videos.

Yet another screening, last year’s Best Picture Oscar winner, The Birdman, will be part of a 10-day festival entitled “CDMX: Music from Mexico City, which will be presented as part of “Pacific Standard Time: LA/LA,” held in conjunction with The Getty and other arts institutions across Southern California. L.A.

As L.A. Phil President and CEO Deborah Borda explains: “Among the 2017/18 season goals is to bring communities together through the shared experience of live music, building bridges and dissolving borders, and to find common threads and musical moments.:

The Phil’s Artist-Collaborator Yuval Sharon will be active on several fronts including a staging of Mahler’s Das Lied von der Erde; and a new work by Annie Gosfield, War of the Worlds, which will be based on the 1898 science fiction novel by H.G. Wells and the infamous 1938 radio broadcast by Orson Wells and his Mercury Theatre Players. The Gosfield work will take place not only in Disney Hall but at various sites around Los Angeles.

Dudamel will conduct the world premiere of Ted Hearne’s opera, Place, produced in conjunction with Beth Morrison Projects, which will not only play at Disney Hall but will be taken on the road during the orchestra’s spring tour.