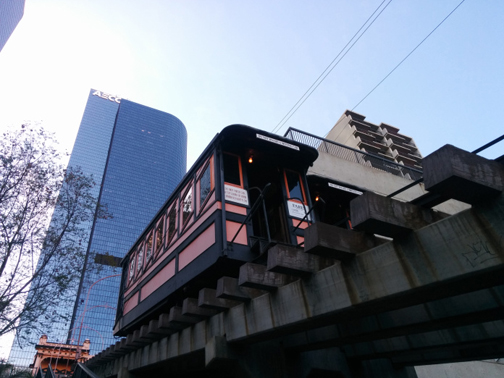 According to a story on today’s Los Angeles Times Web site HERE, Angels Flight — the funicular railway that connects Bunker Hill with Hill St. — is scheduled to be operating by Labor Day. The 298-foot rail line has been shut down since a derailment in 2003. The railway first opened in 1901, albeit in a slight different location.

The story is particularly good news for those visiting the museums, Walt Disney Concert Hall, The Colburn School and the Music Center atop Bunker Hill. Because the lower entrance to Angels Flight is just steps away from the northwest portal of the Metro Red and Purple Line’s Pershing Square entrance, it was easy for Metro passengers to ride Angels Flight to the California Plaza exit atop Bunker Hill and then have a short, flat walk down Grand Ave. to MOCA, Colburn, and Disney Hall and, after crossing 1st St., to the Dorothy Chandler Pavilion, Ahmanson Theatre and Mark Taper Forum of the Music Center. Since Angels Flight shut down, The Broad Museum has opened on Grand Ave., as well.

All of these are accessible from the 1st and Hill St. portal from the Civic Center/Grand Park station, but it’s a steep, uphill walk to get to the top of Bunker Hill. Since the railway shut down, pedestrians have been forced to use a 153-step, steep walkway to ascend the grade.

Laura J. Nelson’s article does a good job of explaining the history and recent travails of Angels Flight. I, for one, had hoped that Metro would actually take Angels Flight over. Instead, Bunker Hill will be accessible via the Grand Av Arts/Bunker Hill stop at 2nd and Hope on the under-construction Regional Connector, which is scheduled to open in 2021. Patrons will ride elevators to get to the top of Bunker Hill, although whether — and if so, how — those elevators can handle a crowd exiting Disney Hall and other facilities at one time is open to question.

The Regional Connector will have the current Gold Line from Pasadena running through the connector from the Little Tokyo/Arts District station to the 7th/Metro station where it will become the Blue Line to Long Beach, while the Gold Line from East Los Angeles will run through the Regional Connector and become the Expo Line to Santa Monica (line names and colors will, undoubtedly, change when this all comes to pass).

Until then a reopened Angels Flight will be a boon to the area.

To see a 3-D video of Angels Flight, click HERE.