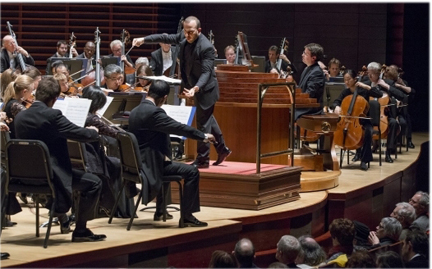 With pipe organs being installed in concert halls in increasing numbers during the past decade or so, composers have gained increasing opportunities to create new organ concertos. Christopher Rouse, one of America’s more prolific composers, has added to the canon with his concerto, which was given its west coast premiere last night by the Los Angeles Philharmonic, conductor David Robertson, and organist Paul Jacobs at Walt Disney Concert Hall.

Remarkably this concerto is just the second organ piece that Rouse has composed (the first, a solo piece, has been “euthanized” from his catalogue, as he puts it). Jacobs premiered the new work last November with Yannick Nézet-Séguin conducting the Philadelphia Orchestra.

Rouse’s Organ Concerto is quite short, just a shade under 20 minutes, written with three connected movements. The Phil’s “FastNotes” states: “Rouse’s Organ Concerto has connections to two famous organ works: a brief reference to the Poulenc Organ Concerto at the beginning, and a hint at the Saint-Saëns ‘Organ’ Symphony at the end. (‘The notes have been changed to protect the innocent,’ Rouse says.)”

Despite its brevity, Rouse’s new work packs quite a wallop. It opens with a loud bang and concludes with an even louder chord. Immediately after that opening punch, Jacobs launched into an extended pyrotechnical cadenza and the movement then shifts to lyrical, tonal writing punctuated with occasional bursts of sound.

The lyrical second movement — with mounds of organ chords atop the dreamy accompaniment — gives way to the finale, which allows the organist to stretch her (or, in this case, his) virtuosic chops.

The Phil placed the organ console at the very front of the stage, which allowed many in the large crowd (which included hundreds of young people) a chance to see Jacobs’ hands fly up and down from one keyboard to another and his feet dance along the pedal board.

Robertson and the orchestra ripped through the accompaniment with aplomb and the audience gave Jacobs, Robertson, the orchestra and the composer an enthusiastic standing ovation following that climactic outburst of sound.

Jacobs responded with a sparkling account of Bach’s Prelude and Fugue in A minor, BWV 543, as an encore, which showed off his technical prowess (the pedal cadenza at the end was dazzling) as well some intriguing registrations on the Disney Hall instrument.

Any orchestra that has a significant pipe organ (or Cameron Carpenter’s international touring instrument) and a top-flight organist available now has a wonderful piece to alternate with the usual organ concerto suspects. I hope the Phil brings it back soon.

Robertson’s programming choices are always interesting; last night was no different. He opened with Charles Ives’ Three Places in New England, a 20-minute work with a lengthy gestation period; Ives began it in 1903 and didn’t finish revising the piece until 1929.

Ives’ father told him, “You won’t get a wild, heroic ride to heaven on pretty little sounds.” Despite that admonition, with its spooky beginning and incorporation of snippets from familiar hymns and folk tunes Three Places in New England is one of this craggy composer’s most accessible works and, consequently, one of his most played, as well. Rouse even seemed to quote the work in his concerto.

Although Robertson has undoubtedly conducted Dvorak’s “New World” Symphony hundreds — perhaps thousands — of times and the Philharmonic musicians have played it innumerable times, as well, conductor and musicians treated last night’s performance as if it, rather than Rouse’s work, was the premiere.

The piece offers innumerable solo opportunities and the Phil’s section leaders were at the top of their game, beginning with Carolyn Hove’s plaintive second-movement solo, and also including (but not limited to) Denis Bouriakov, flute; Burt Hara, clarinet; Anne Marie Gabriele, oboe; and Andrew Bain, horn.

The 58-year-old Robertson — who has announced he is leaving his post as music director of the St. Louis Symphony in a couple of years — is a wildly exuberant presence on the podium. Where with Gustavo Dudamel, for example, you are entranced by his hands, with Robertson you watch his feet — if he ever touched the metal supporting bar behind the podium after his feet slid along the carpet he’d probably get a static-electricity shock.

Nonetheless, he clearly communicates his feelings to orchestra and audience alike and really makes effective use of pianissimos and, especially, silences, which always seem to resonate at Disney Hall. In total, the results last night were thrilling, even to a critic who has heard the piece hundreds of times, and the audience ate it up.

Hemidemisemiquavers:
• At the conclusion of the Dvorak, Robertson came onstage to the sustained applause and acknowledged Hove and Bain before asking the entire orchestra to stand. After exiting the stage again, he reappeared but this time to stand with the brass section and then with the winds — a nice touch, even if he didn’t ask the orchestra to turn and acknowledge thos seated behind them as Gustavo always does.
• Because Three Places in New England has both piano and organ parts, Joanne Pearce Martin (the LAPO principal keyboard player) had to leave her piano bench to a colleague, Vicki Ray, and race upstairs to sit at the rarely used organ bench high above the bench seats to play the organ in the third movement.
• The first L.A. Phil performance of Three Places in New England was led by Nicolas Slonimsky in 1932. Most of us know Slominsky as a musicologist, particularly for his marvelous book, Lexicon of Musical Invective. However, Slonimsky was also a conductor and Ives created a chamber-orchestra version of this work for his Boston Chamber Orchestra in 1930.
• The “New World” Symphony was one of the first pieces every played by the Phil when Walter Henry Rothwell conducted the first LAPO performance on Oct 25, 1919.
________________________