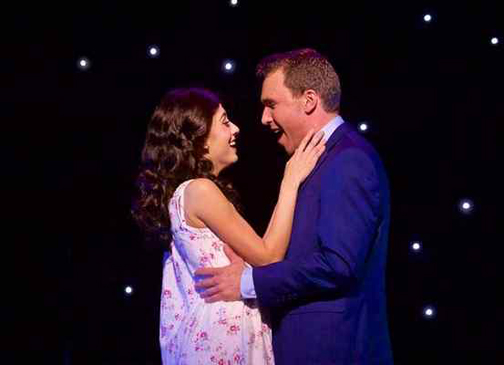 Five things I think I think about the McCoy/Rigby Entertainment’s production of West Side Story, now playing through May 14 at the La Mirada Theatre for the Performing Arts (with apologies to Peter King of SI.com, who runs “10 Things I Think I Think” in his weekly “Monday Morning QB” column).

1. The crowd Friday night was nearly full capacity, much larger than any of the three previous productions for the current season. There were lots of young people in the audience, always a good sign!

2. If your only experience of West Side Story is through the somewhat sanitized 1961 motion picture, this realistic mounting of the original 1957 Broadway production will come as quite a shock, particularly the riveting conclusion. The book, which was written by Arthur Laurents with lyrics by Stephen Sondheim, is quite raw in many places and Bernstein’s score remains a landmark in 20th century music in part for its ability to fully capture the dramatics in such an intense way.

3. Kudos to McCoy/Rigby Entertainment for not trying to “reset” the action into something more contemporary in terms of the “immigrant vs. ‘native-born American’ ” issues (Puerto Ricans, of course, ARE U.S. citizens, which is part of the story line.) A re-set could have worked but why bother? The anger frustration and bigotry spitting out of Lt. Schrank, the Jets and the Sharks still resonates strongly today.

4. The singer/actor/dancers in a uniformly strong cast and John Todd’s reworking of Jerome Robbins’ original choreography are among the hits of the show. Stephen Gifford’s gritty sets provided a perfect opportunity for everyone to show off their athletic/artistic abilities. Robbins’ choreo was always central the musical’s success. Nothing has changed about that.

5. Sexuality and violence are ever-present in the show, which includes highly suggestive dancing, Tony and Maria in bed, fights, three murders and a graphic rape scene.

Eric Marchese’s review in the Daily News and other California Newspaper Group publications is HERE. He and I are almost completely in agreement.
________________________