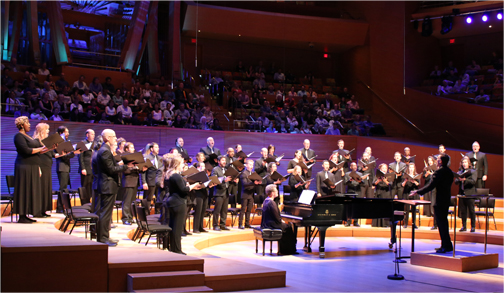 When I sang with famed choral conductor William Hall several decades ago, he used to say that the hardest type of a program for a choir to sing was one with a dozen small, anthem-sized pieces. “It’s much easier to prepare Bach’s B-Minor Mass,” he said with a grimace.

For the penultimate program in the Los Angeles Master Chorale’s 2016-2017, Artistic Director Grant Gershon defied that perspective with a program that included 14 anthem-sized works (counting two encores) and one larger piece (Vaughan Williams’ Mass in G minor). To no one’s great the Chorale pulled it off beautifully.

The program was titled “Wade in the Water,” which Gershon said in his preconcert talk was to convey, “Music of the spirit and music of renewal.” Assistant Conductor Jenny Wong termed the evening one of “humility and harmony.” The title came from a spiritual of the same name arranged by Moses Hogan that was the second piece performed. During the program.

Gershon began with a twist. For the opening work, Stand in That River by Moira Smiley, Gershon had the singers enter the hall down four staircases leading from the Orchestra View level to the stage where they arranged themselves not in the four standard groups (soprano, alto, tenor, bass) but mixed together with two men standing next to two women who were next to two other men, etc. It made for a more homogenous sound throughout the evening.

The only work where that wasn’t the case was Vaughan Williams’ Williams Mass in G minor, which was written for double choir and four soloists. The two choirs were arranged in the Chorale’s standard horseshoe setup rather than being spatially separated but they sang this treacherous a cappella work with elegant precision.

The solo quartet, perched on an elevated riser behind the other singers, sounded like a separate choir when they sang together. The quartet — Andrea Zomorodian, soprano; Laura Smith Rethe, mezzo soprano; Michael Lichtenaur, tenor; and James Hayden, bass— sang with a purity of tone that resembled English singers. Lichtenaur was particularly effective in his solo lines.

All of the evening’s soloists were Master Chorale members. They included soprano Zanaida Robles, who delivered delicate but heartfelt lines in Wade in the Water, and later received a standing ovation for her gripping arrangement of Lift Every Voice and Sing, which included powerful solos from mezzo-soprano soloist Garineh Avakian.

Many of the works sung last night are in the repertoires of mainline church choirs and educational institutions. For those of us who are choral singers, it was a particularly glorious night. LAMC Assistant Conductor Jenny Wong conducted two of those familiar pieces in the first half: a rhythmically driving rendition of Hark, I Hear the Harps Eternal and a breathtakingly gorgeous performance of Maurice Duruflé’s Ubi Caritas. At the conclusion of the latter, I said to my wife, “Oh! That’s what it’s supposed to sound like.”

The second half of the program opened with the Chorale delivering top-flight diction and intonation in The Word was God, a complex anthem by Rosephanye Powell. They continued with Randall Thompson’s famous Alleluia; the Alice Parker/Robert Shaw arrangement of Amazing Grace, which featured a luscious solo by tenor Nate Widelitz; and Bright Morning Star by Master Chorale member and former LAMC Composer-in-Residence Shawn Kirchner, with bass-baritone Luc Kleimer as the sensitive soloist.

A noble rendition of Moses Hogan’s arrangement of the hymn, Abide With Me, and rollicking account of Rockin’ Jerusalem as arranged by Rollo Dillworth closed the formal part of the program.

Wong conducted the first encore: another arrangement of the “Ubi Caritas” text, this one by Welsh composer Paul Mealor, which was written in 2011 for the wedding of Prince William and Catherine Middleton. Gershon then capped the evening by leading a luscious account of Deep River, third Moses Hogan arrangement during the evening.