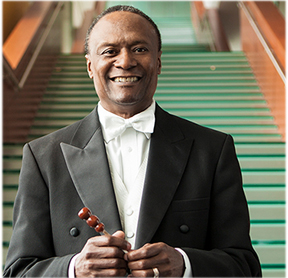 Thomas Wilkins, principal conductor of the Hollywood Bowl Orchestra, has been appointed as a Professor of Music and holder of the Henry A. Upper Chair of Orchestral Conducting at the prestigious Indiana University Jacobs School of Music, pending Trustees approval. He will begin August 1.

The 61-year-old Wilkins has held a titled position with the Hollywood Bowl Orchestra since 2008, when he was named Principal Guest Conductor; in the spring of 2014 he became the orchestra’s Principal Conductor. On June 17 he will conduct the Bowl’s opening-night concert and will also lead several other HBO concerts throughout the upcoming Bowl season.

Wikins is also music director of the Omaha Symphony, a position he will retain through the 2020-21 season, whereupon he will become music director emeritus. In addition, he holds the Germeshausen Family and Youth Concert Conductor Chair with the Boston Symphony.