This column ran in Sunday’s print editions of our papers.

May will be a bittersweet month as two groups bid farewell to their long-time music directors. John Alexander will step down from his post at the Pacific Chorale after that ensemble’s final concert for the season on Saturday at the Renée and Henry Segerstrom Concert Hall. The following weekend will be Jeffrey Kahane’s last concerts as Los Angeles Chamber Orchestra music director. Both will stay on in Conductor Laureate categories, but their full-time involvement will cease this month. 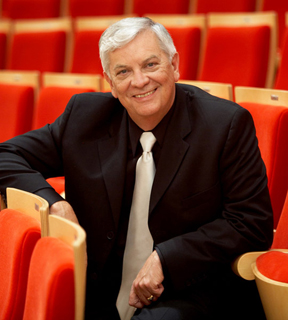 Alexander (pictured left), who has been at the musical helm at the Pacific Chorale for 45 years, has assembled a collection of favorite anthems for his final program, which will conclude with Vaughan Williams’ Symphony No. 1 (“A Sea Symphony”), a rarely performed work but one of the English composer’s best symphonies. The Pacific Symphony and soloists Layla Claire, soprano, and Brian Mulligan, baritone, will join in the Vaughan Williams.

Kahane has led LACO for 20 years. His final program, on May 20 at the Alex Theatre in Glendale and the following night in UCLA’s Royce Hall, will feature a first and two lasts: the world premiere of Will There Be Singing by Christopher Cerrone, LACO’s first performance of Schubert’s last symphony, No. 9, D. 944 (“The Great C-Major”), and Mozart’s final piano concerto, No. 27 in B-flat major, K.595, with Kahane playing and conducting from the keyboard.

Both men have led their groups to new heights during their respective tenures. Alexander took over the reins of what was then known as the Irvine Master Chorale in 1972, just four years after Maurice Allard founded the ensemble as the Irvine Community Chorus. Now with 140 professional singers, the Pacific Chorale has been Segerstrom Concert Hall’s resident choir since the hall opened in 2006.

Texts have also been critically important to Alexander’s conducting style, so it’s no surprise that his final concert concludes with Vaughan Williams’ “A Sea Symphony,” which uses texts from American poet Walt Whitman. The four-movement work, first performed at England’s Leeds Festival in 1910, opens with a bang — a full-throated chorus singing the line, “Behold, the sea itself!” — and concludes nearly an hour later with the final notes, “O farther, farther sail,” evaporating into the mists of the sea. 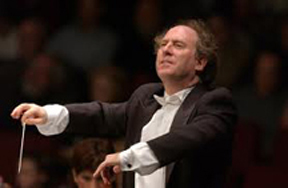 Kahane (pictured right) took over LACO in 1997 a couple of years after Christof Perick abruptly resigned the position. It was a troubled time for the orchestra, which was still recovering from formidable financial issues.

Kahane was far-better known as a pianist — he won the prestigious Artur Rubinstein International Piano Competition in 1983 and was building a flourishing concert career.

However, in 1995 Kahane became music director of the Santa Rosa Symphony in Northern California and two years later the LACO board gambled on his, and its, future by naming Kahane as its new music director. That bet paid off in spades, as LACO has grown and prospered under Kahane’s leadership to the point where it now has orchestral, chamber music and baroque series annually and is one of the nation’s premiere chamber orchestra.

One difference between the two groups is that the Pacific Chorale has already named Alexander’s successor: Robert Istad, who nine years ago took over when Alexander retired as Professor of Music and Director of Choral Studies at California State University, Fullerton. On the other hand, LACO continues to search for Kahane’s replacement.