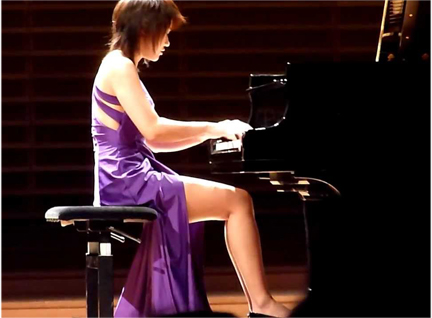 Yuja Wang was the soloist in Bartók’s Piano Concerto No. 1 with the Los Angeles Philharmonic last night in Walt Disney Concert Hall.

As we drove home following the concert at Walt Disney Concert Hall, fireworks blazed in the sky over Dodger Stadium. They paled compared to the fireworks that exploded inside Disney Hall.

Music & Artistic Director Gustavo Dudamel and the Los Angeles Philharmonic began a two-week series last night that will conclude the Phil’s 2016-2017 indoor subscription season. The cycle revolves around the three piano concertos of Bela Bartók, with Yuja Wang as the soloist. Dudamel is surrounding each concerto with music by Igor Stravinsky and Leoš Janáček — this weekend it’s two rarely heard and disparate pieces based on Roman Catholic liturgy: Stravinsky’s Requiem Canticles and Janáček’s Glagolitic Mass.

Since her Phil debut at Hollywood Bowl in 2011, Wang has been one of the most enjoyable pianists at Phil concerts and recitals both for her playing and what she wears. In her Los Angeles Times profile of Wang yesterday (LINK), Deborah Vankin wrote: “Wang says she has outgrown some lifestyle choices for which she’s known. Of fashion, once an obsession, she says, ‘Oh, it was a phase.’ ” Based on the long, purple slit dress she wore last night (see photo above), Wang clearly had her tongue in her cheek during the interview.

However, as usual, Wang playing was the real story. Although she has performed the Bartók concertos individually during this season, this will mark the first time she will play them in a cycle. Somewhat surprisingly, last night she used a score for the complex, percussive score (given the number of notes, I was glad I wasn’t turning pages). She tore through the music with the virtuosity for which she is well known, pausing along the way to let more delicate passages drip off of her fingers.

Dudamel, who also used a score — in fact, for the first time I can remember he used scores on all three of the evening’s pieces — and the Phil were on their rhythmic toes throughout the performance, for which all concerned received an especially lengthy standing ovation.

Stravinsky’s Requiem Canticles was the last major work the composer wrote, five years before he died in 1971 (in what was probably a cut-and-past error, the printed program managed to bogey all of Stravinsky’s birth and death information).

Although scored for a massive orchestra, chorus and two soloists, Requiem Canticles is just 15 minutes long, uses only 24 lines of the Roman Catholic Requiem liturgy (Stravinsky termed it his “first mini- or pocket-requiem”), and never has the full orchestra playing — often just a few instruments cover the singers.

It remains a perplexing work for the hearer, full of the dissonances and serialism that Stravinsky was using at the time. The Los Angeles Master Chorale, which numbered 92 according to the printed program, sang with delicate precision, mezzo-soprano Alisa Kolosova delivered “Lacrimosa” lines with creamy, luxurious tones, and bass Stefan Kocan was properly stentorian in the “Tuba Mirum” section, aided expertly by Principal Trumpet Thomas Hooten.

If Requiem Canticles is at the mini-end of the musical scale, Janáček’s Glagolitic Mass stands at the opposite extreme. It was written in 1926 and revised in 1928, the same time frame as the first Bartók piano concerto. Janáček was age 73 at the time and his textual choice remains perplexing.

“ ‘The ageing composer [Janáček] had a positive aversion to organized religion, even to churches. He would not go into one even to get out of the rain,’ his niece wrote. ‘The church to me is the essence of death,’ Janáček observed, ‘graves under the flagstones, bones on the altars, all kinds of torture and death in the paintings. The rituals, the prayers, the chants – death and death again! I won’t have anything to do with it.

“Yet after the first performance of the Glagolitic Mass in Brno (in a church), in the composer’s native Moravia, in December of 1927, a Czech newspaper critic wrote: ‘The aged master, a deeply devout man, has composed this Mass out of passionate conviction that his life’s work would be incomplete without an artistic expression of his relation to God.’ Janáček was outraged and wrote in return a postcard with a four-word response: ‘Neither aged, nor devout.’ ”

Rather than religious, Janáček conceived the work as a pantheistic, patriotic work, using for the text — instead of Latin — Old Slavonic (whose written characters are in Glagolitic, thus the work’s title). The words were the same Missa Solemnis text used by Beethoven in his Op. 123 work written near the end of his life.

Like Requiem Canticles, the Glagolitic Mass is scored for giant-sized orchestra and full chorus, but unlike Stravinsky Janáček uses them in full-throated glory. Dudamel conducted the work with an irresistible swagger, the orchestra’s strings were notable for their lean sound, and the full brass section was glorious throughout. The Master Chorale sang the difficult text superbly. In addition to Kolosova and Kocan, soprano Angela Meade sang gloriously with full operatic fervor, while Ladislav Elgr’s clarion tenor voice soared over the orchestra and chorus with seeming ease.

The orchestral score includes a pipe organ and, after the final choral section, Latvian organist Iveta Apkalna put a virtuosic cap on the proceedings using the Disney Hall organ in the “Varhany” solo movement (the word means “organ” in Czech), which concludes with a pedal-solo flourish.

The 1928 version has Glagolitic Mass concluding with a short, dramatic orchestral movement, “Intrada,” which preconcert lecturer Eric Bromberger noted might be thought of as a recessional rather than an introit (the original 1926 version had the movement at the beginning). As an organ lover I might have opted for the earlier version.

Hemidemisemiquavers:
• The two-week Bartok cycle concludes next week with the second piano concerto on June 1 and 2 and the third concerto on June 3 and 4. Both concertos are surrounded by Stravinsky’s Symphonies of Wind Instruments and Janáček’s Sinfonietta. Information: www.laphil.com
• The final concert of the Disney Hall season is a “Green Umbrella” performance of Lou Harrison’s opera Young Caesar on June 13, with the L.A. New Music Group conducted by Mark Lowenstein, and the production staged by Yuval Sharon in collaboration with his group, The Industry. This year marks the centennial of Harrison’s birth. Information: www.laphil.com
________________________