Arts organizations hate cancellations, whether it’s a conductor, soloist, composer, whatever. At the bottom of each ticket and Web page are the words “Programs, artists, dates, times, prices and availability subject to change. No one likes to invoke these words but there are occasions and there are occasions, as the Los Angeles Philharmonic discovered twice this week. 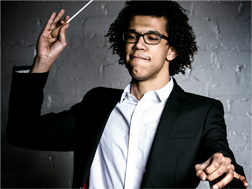 Early in the week, guest conductor Miguel Harth-Bedoya cancelled his appearances at this weekend’s Phil concert due to illness. Into to his place stepped current Dudamel Fellow Jonathan Heyward (pictured right), who will lead the program with just one change — Stravinsky’s 1919 Firebird Suite replacing Rachmaninoff’s Symphony No. Since Heyward also has to conduct a world premiere and Leonard Bernstein’s Serenade (after Plato’s “Symposium”), freeing him from having to learn the Rachmaninoff seems reasonable.

After all, the focal point of the program is violinist Hillary Hahn as soloist in the Bernstein piece, which — despite its fancy title — is really a violin concerto. While there may have been a few folks who bought tickets to see Harth-Bedoya or hear the Rachmaninoff symphony, those numbers can’t be too high and they get the chance to see an up-and-coming young conductor leading one of Stravinsky’s most popular scores.

By contrast, two days later came news that Zubin Mehta has undergone shoulder surgery and has to lay off conducting for at least four weeks, a period which includes a set of concerts with the L.A. Phil on Dec. 14, 15, 16 and 17. The program includes pianist Khatia Buniatishvili as soloist in in Mozart’s Piano Concerto No. 23 in A, K. 488 and Bruckner’s Symphony No. 9.

This presents the Phil with a much tougher replacement problem. Most of the people who bought tickets for these concerts did so because of Mehta, a former L.A. Phil music director with a still-loyal following. Moreover, Bruckner’s Symphony is not in every conductor’s arsenal. So it’s no surprise that no replacement conductor for the program has been named. Stay tuned!
______________________