This weekend marks the official celebration of the 10th anniversary of the Walt Disney Concert Hall organ, dubbed “Hurricane Mama” by organist and composer Terry Riley after he first played it. The Los Angeles News Group has published several of my articles on the organ and upcoming concerts and following are the links:

• First, my review of the Los Angeles Philharmonic’s concert on Nov. 20, one of the major events celebrating the organ, is HERE.
• My preview of organist Cameron Carpenter’s appearance with the Los Angeles Philharmonic is HERE. I have an additional article on Cameron at the bottom of this post HERE.
• My profile of composer Stephen Hartke, whose Symphony No. 4 is receiving its world premiere this weekend, is HERE.

• What’s behind the façade of the Disney Hall organ? Published online HERE. Additional notes on the WDCH organ stories are at the bottom of this post HERE.

• Timothy Mangan, music critic of the Orange County Register, has a sparkling interview with Cameron HERE.

My preview article on the Los Angeles Philharmonic’s concerts next weekend (Nov. 20-23) with organist Cameron Carpenter is published on Los Angeles News Group Web sites HERE. It will be published in the above papers Sunday. 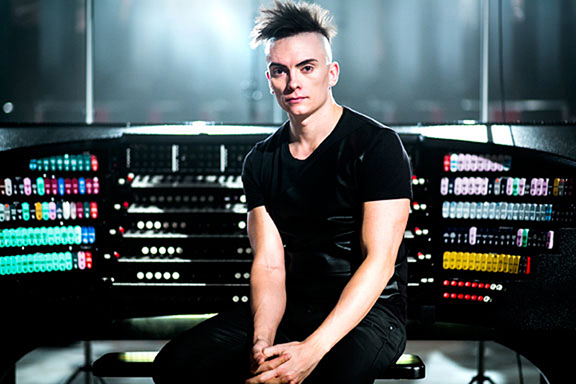 Cameron Carpenter poses in front of his International Touring Organ, on which is now playing nearly of his solo recitals.

Wacky and Wonderful. Goofy and Genius. There are more nicknames attached to organist Cameron Carpenter than his age (33). The Los Angeles Philharmonic, on its Web site, terms Carpenter a “subversive organ virtuoso” and an “audacious arranger.”

Finding a single descriptive word or phrase is impossible. Mark Swed in the Los Angeles Times has written: “Carpenter is one of the rare musicians who changes the game of his instrument… He is a smasher of cultural and classical music taboos. He is technically the most accomplished organist I have ever witnessed… And, most important of all, the most musical.”

Carpenter has been a lightning-rod figure in the world of classical music since he emerged onto the scene as a pre-teen. He was born in rural northwestern Pennsylvania and home schooled by his parents (who he described in one article as “ex-hippies”). He began playing the piano at age 4 and at the same age fell in love with the organ, not because he heard one but because of a photo he saw in a music encyclopedia of someone playing the cinema organ from the 1920s. “I was immediately mesmerized by the glamour of the instrument,”

Carpenter continued his piano lessons and performed Bach’s Well-Tempered Clavier at age 11 before joining the American Boychoir School in 1992 as a boy soprano, where he again became interested in the organ. He made his European debut as an organist when he was 13.

During his four years of high school studies at The North Carolina School of the Arts in Winston-Salem, Carpenter played for the First Baptist Church and was resident organist at the Reynolda House of American Art. While in high school, Carpenter also studied orchestration and orchestral composition and transcribed for the organ more than 100 major works, including Gustav Mahler’s complete Symphony No. 5.

Carpenter went on to earn bachelor’s and master’s degrees at The Juilliard School where he studied with such organ luminaries as Gerre Hancock, John Weaver and Paul Jacobs; the latter has been chair of the organ department at Juilliard since 2004, despite being just four years older than Carpenter.

Carpenter has played pipe organs throughout the world, growing increasingly dissatisfied with the limitations each instrument places on the performer. Those limitations include where the console is located, often hidden from the audience. For make no mistake, Carpenter is, first and foremost, a performer. He often strolls into the hall an hour before each recital talking and shaking hands with friends and strangers alike. 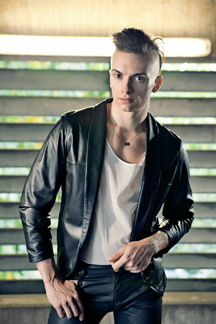 The performing environment is critical to Carpenter and it’s one reason he loves playing the organ in Walt Disney Concert Hall. “I believe that music is both an aural and a visual art and the entire look of Disney Hall and its organ exemplifies that,” he told me. But asked how long it would take to register the Disney Hall organ for this weekend’s programs (Barber’s Toccata Festiva, Carpenter’s transcription of Scriabin’s Piano Sonata No. 4, Saint-Saëns Symphony No. 3 and a preconcert recital), he groaned, “Too long!”

That was one of the frustrations that led him to Marshall & Ogletree, of Needham, Mass. Together they have built what he calls the International Touring Organ, a massive, innovative digital instrument that Carpenter now uses for his recitals. The ITO (which nearly fills a concert hall stage) has a console that is 9’ x 7’ and 10, and gigantic speakers, each 2.5 x 4.5 feet.

Unlike violinists, who travel with and plays their personal instruments, organists (and pianists) are at the mercy of the instrument in the hall or church. Vladimir Horowitz, who had a reputation for eccentricity similar to Carpenter’s, traveled with his own Steinway piano. Until now an organist could not do this, except for one: Virgil Fox, who in the 1970s traveled with an analog Rodgers Touring (electronic) organ and then an Allen Organ.

However, comparing those instruments to the ITO is to compare, well, analog and digital formats. Among other advantages, the digital age enables Carpenter to program thousands of sounds from the organs that he has most admired into the ITO. One way to hear just how amazing the instrument sounds is on his newly released SONY CD, If You Could Read My Mind. If you have a top-notch sound system in your car or at home, the music will rattle your windows.

Remarkably the ITO takes far less time to set up than it takes Carpenter to register a pipe organ. The entire instrument fills a single truck. Load in begins at 9 a.m. on the day of the recital and by about 11:15 a.m. the instrument is set up and ready for testing. Carpenter spends five hours in the afternoon testing, checking the hall’s acoustics and rehearsing. Load out after the concert takes a mere two hours.

The ITO made its debut in New York last March and in Europe two months later. Carpenter already has 90 performances booked for next year. Identical European and American sound systems (housed in Berlin and Needham, MA) make this truly an “international” touring organ.

Moreover, the ITO opens up thousands of venues that don’t have a pipe organ and he will even use the ITO in places where a pipe organ exists, such as the Kimmel Center in Philadelphia next January and the Kennedy Center in Washington, D.C. in February.

Thus, the Disney Hall recital in which he will play this Sunday and the preconcert recitals before the Thursday, Friday and Saturday concerts will be increasingly rare events: hearing Cameron Carpenter playing a recital an actual pipe organ. “It has,” says Carpenter, “taken far less time than I would have imagined to eradicate any solos on pipe organs from my itinerary.”
_______________________

Next week, I’ll offer a profile of Holland native Wieck
Hijmans, who will be the soloist in Ritornello
for Electric Guitar and Orchestra (yes, you read correctly, electric
guitar) by LACO’s composer-in-residence, Derek Bermel, which will be part of
the opening program on Sept. 24 at Glendale’s Alex Theatre and September 25 at
UCLA’s Royce Hall (LINK).

Meanwhile, in today’s Orange
County Register and online, Timothy Mangan, the Register’s music critic, offers his retrospective HERE of the
Segerstrom Center for the Arts (originally called the Orange County Performing
Arts Center) in Costa Mesa as the Center celebrates its 25th
anniversary.

Among other performances to open the anniversary season will
be the Pacific Symphony’s opening concerts Sept. 22-25 (LINK) and a free
recital by organist Cameron Carpenter on Oct. 2 (LINK), both at Segerstrom
Concert Hall, which opened five years ago adjacent to the original OCPAC
building. Tim’s article touches on the many contributions of Henry Segerstrom
and his family in the Center’s quarter-century of growth.