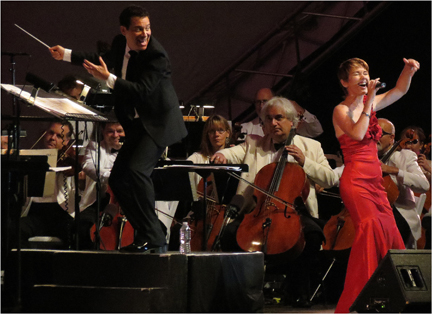 Midway through the Pasadena Pops concert last night at the Los Angeles County Arboretum, Michael Feinstein thanked the audience for accompanying him and the orchestra on what he called an “experiment” in pops programming.

The description was spot-on. This was Feinstein’s first concert as the orchestra’s Principal Conductor and his first time conducting a full-sized orchestra. Whatever you thought of his conducting ability, there was no doubting the uniquely fascinating nature of the evening’s program, Of the 19 pieces performed, I can only remember two or three that I had ever heard on an orchestra pops program in my decades of reviewing.

Feinstein played to his numerous strengths. His commentary was, for the most part, erudite and witty and many of the works were pieces he had either exhumed in his archival wanderings or had rarely been played before. Nearly all were from the mid- to late-20th century, an era in which Feinstein has focused in what has become known as the “Great American Songbook.”

As a conductor, Feinstein seemed uncomfortable at times and in his element in others. There were occasional ragged entrances and cutoffs but, for the most part, the orchestra acquitted itself well, especially considering that for many of the players a healthy slice of the program was music they were playing for the first time. Feinstein will undoubtedly get better on the podium; most fledgling conductors cut their teeth on student or community ensembles, not on a stage before several thousand people.

In the first half of the evening vocalist Lari White delivered powerful performances of Jump for Joy and Bewitched, Bothered and Bewildered, both arranged by Nelson Riddle, whose birthday was on June 1. She then concluded with poignant renditions of Where is it Written? and A Piece of the Sky from the movie Yentl.

Marc Cherry proved to be the evening’s comedic highlight with a rollicking performance of Mrs. Worthington by Noel Coward. Cheyenne Jackson delivered over-wrought performances of I Get Along With You Very Well and Don’t Get Around Much Anymore, but was effective in channeling Sam Cooke in A Change is Gonna Come. Jackson noted that Barbara Cook once admonished him to talk less and sing more. He should have heeded her advice.

Feinstein concluded the evening by singing a touching rendition of The Way We Were from the keyboard, a tribute to Marvin Hamlisch, who died last August (which is how Feinstein ended up as the Pops leader). Feinstein’s opening concert offered a great deal of promise for what he will bring in the two other programs he will conduct this summer and, perhaps, into the future.
_______________________

Hemidemisemiquavers:
• The Pops will appear June 9 at the Ford Amphitheatre (in the Cahuenga Pass, across the 101 Freeway from Hollywood Bowl) with vocalist Mandy Patinkin. The performance is part of the inaugural “Zev Yaroslavsky Signature Series” at the Ford (Yaroslavsky’s L.A. County supervisorial district encompasses both the Ford and the Bowl). Info: www.fordtheatres.org
• Last night’s ambience was enhanced greatly by what seemed like hundreds of young volunteers who helped people to their seats and, in particular, provided light on the footpaths leading to the parking lots following the performance.
• Concertmaster Ainme Kreston led a somewhat lugubrious rendition of The Star Spangled Banner from her first-violin chair.
• Feinstein had a lot of fun with the Arboretum’s peacocks, many of whom were in fine voice Saturday night.
• The Pops second concert of the season, on June 29, will center on Broadway star Bernadette Peters. Feinstein will return on July 13 for an evening of music from MGM movies, and will conclude the season on Sept. 7 in an evening of the music of George and Ira Gershwin. In between those two, Martin Herman will lead the orchestra in a program featuring music of the Beatles.
_______________________ 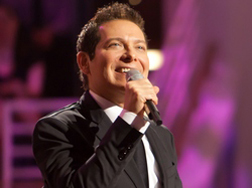