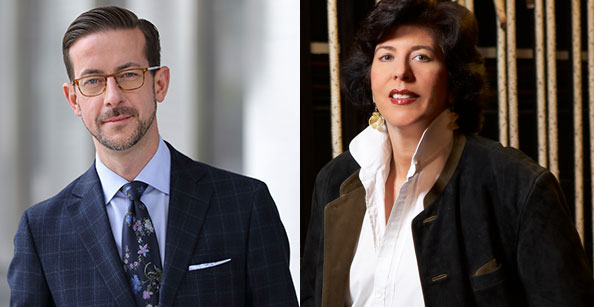 Christopher Koelsch, president and CEO of Los Angeles Opera (above, left) will talk to Francesca Zambello, director of Daniel Catan’s opera, Florencia en el Amazonas, tomorrow (Nov 12) from 9:30 a.m. to 10:30 a.m. as the company’s second “Livestream” conversation. The conversation, which will take place onstage at the Dorothy Chandler Pavilion, will be streamed live via www.laopera.org and www.facebook.com/LAOpera.

La Opera will revive its production of Florencia beginning Sat., Nov. 22, at 7:30 p.m. in the first of six performances. Ms. Zambello, who directed the world premiere of FLORENCIA in Houston in 1996 and its LA Opera premiere the following year, will discuss the opera’s journey, having directed it first with the late composer and now, without him. INFORMATION

Normally each Thursday morning, I list five events that peak
my interest, including (ideally) at least one with free admission (or, at a minimum,
inexpensive tickets). However, because of the Thanksgiving holidays, I’ve only
found two events — admittedly important ones — for this week’s listing.
However, there are also some upcoming events that are worth adding to your
calendars.

Tomorrow and
Saturday at 8 p.m., Sunday at 2 p.m. at Walt Disney Concert Hall

Whether it’s a case of “absence makes the heart grow fonder”
or the fact that the L.A. Phil always seems to play with extra fervor under the
baton of its former music director, whenever Esa-Pekka Salonen (pictured right) comes “home” to conduct
the LAPO it’s a special occasion. For those new in town or to classical music,
the now-53-year-old Finnish-born Salonen was the Phil’s music director for 17
seasons (1992-2009), the longest tenure among the 11 people to hold the
position.

This weekend is the first of two consecutive Salonen
programs: Beethoven’s Lenore Overture, No.
2 and Piano Concerto No. 2, along with the world premiere of Sirens by Swedish composer Anders
Hilborg.

Sirens is scored
for large orchestra, mixed chorus (the Los Angeles Master Chorale), and two
soloists: soprano Hila Plitmann and mezzo-soprano Anne Sofie von Otter. The 30+
minute piece was commissioned by the late Betty Freeman and dedicated both to
her and to the conductor. Salonen has a three-minute video on his Web site
(LINK) where he discusses the work’s genesis and speaks lovingly of Freeman,
who he described as “sorely missed and a great supporter of new music.”

Hilborg writes of the piece: “In Greek mythology, the Sirens were murderous bird-women who used
their voices to lure sailors to their island. In Homer’s The Odyssey, Ulysses orders his crew to
plug their ears and tie him to the mast so he will be able to hear, and
survive, the deadly singing.

The Sirens try to lure Ulysses in numerous ways: they
flatter his ego; they appeal to his mind and soul, promising him they’ll
disclose all the secrets of the world; and they sing seductively, arousing him.

Then the Sirens’ true monstrous identity is revealed, as
their powerful singing transforms into horrendous screaming. The hallucination
dissolves and all reverts back to calm sea, as Ulysses’ vessel sails out of danger.”

Emanuel Ax, a long-time collaborator with both Salonen and
the Phil, will be the soloist in the concerto, which (despite its number) was
actually the first piano concerto that Beethoven composed. Well-known
harpsichordist and conductor Lucinda Carver will deliver a lecture an hour
before each concert.

The opera was based on Ardiente
Pacienca (Burning Patience), a 1985 novella by Antonio Skrmeta,
and the award-winning (and beloved by many) 1994 film, Il Postino, by Michael Radford, but
Catn turned it into his own very special and, as it turned out, final work
(the composer died unexpectedly last April). A link to the laudatory reviews,
including mine, is HERE.

For the “futures” section of your calendar:

The Metropolitan Opera had originally scheduled two “Live in
HD” telecasts for December: Handel’s Rodelinda,
starring Rene Fleming with Harry Bicket conducting, on Dec. 3; and
Gounod’s Faust, with Jonas Kaufman in
the title role and Yannick Nzet-Sguin conducting a new production, on Dec.
10.

The company has added two “encore” presentations (i.e.,
previously recorded telecasts), both of which are worth attending: Mozart’s The Magic Flute on Wed., Dec. 21 at 6:30
p.m. and Humperdinck’s Hansel and Gretel
the following evening. There are several things that make these productions
noteworthy:

They’re short (Magic
Flute clocks in at 110 minutes and Hansel
and Gretel runs 123 minutes) as opposed to Rodelinda and Faust, both
of which are more than four hours in length.

They’re both sung in English.

They’re both labeled as “family friendly.” The Magic Flute was staged by Julie Taymor
with the same sort of puppet and fantasy magic that characterized her
production of The Lion King. The
fairy tale setting of Hansel and Gretel is
equally enchanting. Both are great for adults and kids alike.

A couple of added bonuses:

Hansel and Gretel
was one of the last roles (The Witch) for the great English tenor, Philip
Landridge, who died on March 5, 2010 just a few months after this production
aired.

The Magic Flute
was conducted by James Levine and it’s no telling how long it will be before we
see the Met’s music director back in the pit (he’s recovering from back
surgery).

One downside: you’re going to have a hard time finding a
theater locally for Hansel and Gretel, at
least as of this writing. While The Magic
Flute will be shown at the Alhambra Renaissance 14, Covina 17 and Puente
Hills 20, the closest theater (to me) for Hansel
and Gretel is the Cinemark 14 in Long Beach, which does have the advantage
of being within walking distance of the Metro Blue Line stations at 1st
St. and the Long Beach Transit Mall.

NOTE: This post has been amended to include a quote from Charles Castronovo at the end and a link to the LA Opera Web site.

Daniel Catn, the most significant Mexican-American
classical music composer of the last 25 years, died unexpectedly Saturday in
Austin, TX at the age of 62. Catn, who lived in South Pasadena, was best known
for his opera Il Postino, which was
premiered last September to great acclaim and sold-out audiences at Los Angeles
Opera.

Il Postino starred Placido Domingo as
Pablo Neruda and Charles Castronovo as Mario Ruppolo (The Postman of the
title). In my review (LINK), I called the work “a stunning new opera … one of those
all-too-rare nights when every individual element melded marvelously… a
performance that reminded us that opera — at its best — can touch emotions and
tell stories like no other medium.” Many other critics were equally laudatory
in their reviews. (LINK)

Il Postino went on
to performances in Vienna and will be presented at the Theatre du Chtelet in
Paris on June 20. Another production was mounted last week by the University of
Houston’s Moores Opera Center.

Catn’s death is obviously a tragedy for his family and friends
(he is survived by his wife Andrea Puente, three children Chloe, Tom, and Alan,
and four grandchildren). However, it’s also a great loss for all who love opera
and particularly those in Southern California, with its large and growing
Latino population. Part of what made Il
Postino distinctive was that it was written in Spanish.

Although Catn’s lyrical style was likened to Puccini — most
notably in Il Postino — what made Catn
unique was his ability to infuse his works with a Mexican flavor without being
too obvious about it (Catn was born in Mexico City and later became a U.S.
citizen.

When San Diego Opera produced his Rappacini’s Daughter in 1994, Catn became the first Mexican
composer to have an opera produced in the U.S. Two years later, Houston Grand
Opera commissioned Florencia en el
Amazonas, which was subsequently produced by LA Opera. It was the first
opera written in Spanish underwritten by a major opera company.

Catn was also notable for creating in Il Postino an opera that was as memorable as its sources: the 1985
novella Ardiente Pacienca (Burning
Patience) by Antonio Skrmeta and the Academy-award-winning 1994 film, Il Postino (The Postman), by Michael
Radford. Few operas, or motion pictures, for that matter, are able to translate
its source material as well as did Catn in Il
Postino. In the process Catn created something that was, on the one hand,
familiar and, on the other, totally different.

Catn had recently written a new chamber version of his
first opera (now called La Hija de
Rappaccini) and was currently at work on his fifth opera, Meet John Doe, which was due to premiere
in October 2012.

Catn studied philosophy at the University of Sussex in
England before enrolling at Princeton University as a PhD student in composition.
Following his studies he served as music administrator at Mexico City’s Palace
of Fine Arts (1983-89). Catn was also a writer on music and the arts. His
honors include the Plcido Domingo Award in 1998 for his contribution to opera
and a Guggenheim Fellowship in 2000.

Catn was on leave from his position on the faculty of
College of the Canyons in Valencia when he died. The Los Angeles Times is reporting (LINK) that the composer died in
his sleep in his apartment in Austin, and no foul play is suspected, according
to a spokeswoman for the university. The composer’s representative said that he
wasn’t suffering from any known illnesses.

Marc Stern, chairman of LA Opera, issued the following
statement: “On behalf of Plcido Domingo and the entire company, we are shocked
and grief-stricken at this terrible loss. (since it is the middle of the night
in Japan at present, Plcido is not yet aware of this heartbreaking news; I
know he will be devastated). All of us at LA Opera were truly fortunate to have
worked very closely with Daniel as he prepared “Il Postino” for its world premiere in
Los Angeles last year … and Daniel became a beloved and respected member of the
LA Opera family in recent seasons.

“The incredible success of Il Postino should have marked the beginning of a new era of
artistic achievement for him,” continued Stern. “He was unquestionably one of
the most important opera composers of our time as well as one of the most
popular, and his sudden passing is a terrible loss to the world of classical
music. I know that his operas will continue to move audiences with their beauty
and emotional power. We send our deepest, heartfelt sympathies to his wife and
family on their terrible, sudden loss.”

From Rome, where he is performing, Castronovo wrote: “It was a rare opportunity  to be able to create the role of Mario in Il Postino with Daniel Catan. His  wonderful music was only one view into a man that was so warm, giving and accepting all at the same time. He made me feel that I was part of his musical process, putting my own personality and musical instincts into a piece of art that he dreamt up with all his love. It was a great honor to know him and create music with him. I know future performances of Il Postino will be full of all the casts love and respect for this wonderful man.”