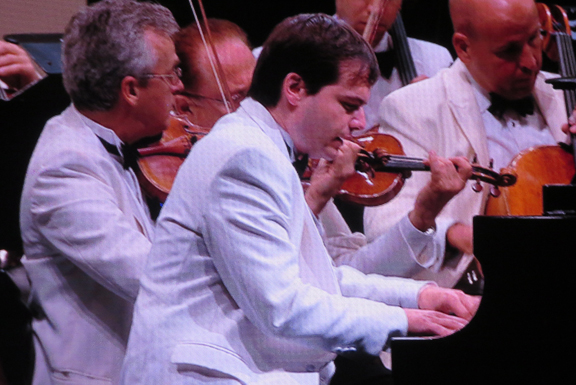 Under the less-than-ideal conditions ever present in Hollywood Bowl (lack of rehearsal time, outdoor amplification — although the sound engineers were in fine form last night — aerial intrusions —including a flight directly over the bowl — rolling wine bottles, etc.) Piemontesi offered a performance as soloist in Beethoven’s Piano Concerto No. 4 that made even someone who has heard this piece dozens of times in performance sit up and take notice.

Born in 1983 in Locarno, Switzerland, Piemontesi sits in an unassuming manner at the keyboard (the antithesis of Lang Lang, to name but one). He counts as his mentors Murray Perahia, Cécelia Ousset, Alexis Weisenberg and, in particular, Alfred Brendel who, says Piemontesi, taught him “the love of details.”

Those influences were particularly evident in his limpid tone and in the grace and sensitive musicality he brought to the lyrical moments of this ground-breaking concerto, including the trills and runs that permeate much of the work. However, even in the bravura portions of this work there was a genuine sense of musicality to the performance. Rarely has the Bowl’s Steinway sounded so elegant. Someone needs to get Piemontesi back here — and indoors — quickly.

In response to a sustained ovation (lengthy, even by Bowl standards) and at Guest Conductor Andrew Manze’s urging, Piemontesi offered a graceful account of a work that a colleague identified as Au lac de Wallenstadt from the Suisse section of Liszt’s Années de pèlerinage. Throughout its gentle elegance my mind flashed 40 years to when I first Murray Perahia in a solo recital — highest praise, indeed.

Manze and the Los Angeles Philharmonic offered vigorous, yet sensitive support of Piemontesi. We would get a better take on Manze from their performance of Schubert’s Symphony No. 9 (“The Great”), which concluded the concert. 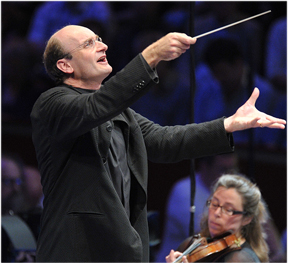 At age 51 Manze (pictured left) is in that “no-man’s land” for conductors. He is too young to be thought of as one of the “old guard” (e.g., Riccardo Muti, Daniel Brenboim) but he’s too old for orchestras that are enamored with the marketing flash and sizzle of younger conductors such as Mirga Gražinytė-Tyla, Pablo Heras-Casado and — yes — Gustavo Dudamel.

Balding and bespectacled, Manze looks like a genial professor and scholar (both of which he is). He is a former top-flight violinist who cut his conducting teeth in period-performance music, first as Associate Conductor of the Academy of St. Martin-in-the-Fields and then of The English Consort.

He is quietly building his resume (and expanding his repertoire) with provincial European orchestras, including the Helsingborg Symphony in Sweden from 2006-2014 and since then as Principal Conductor of the NDR Radio-Philharnonic in Hannover. Think of him as a musical “cousin” to another British string player (in this case, a cellist) turned “under the radar” conductor: David Lockington, now Music Director of the Pasadena Symphony.

With Gustavo Dudamel leading only about 35% of LAPO concerts during any one season (typical for music directors of major orchestras these days), having a roster of solid, inspiring guest conductors is a must. Manze appears to be one of those.

He made his L.A. Phil in Feb. 2015 in a Haydn-Mozart concert in Walt Disney Concert Hall and his concert on Tuesday night in the Bowl was all-Mozart. Thus, last night’s program of Beethoven and Schubert can be termed pushing the envelope, somewhat.

Manze led an exuberant, vigorous account of Schubert’s Ninth and the orchestra responded with first-rate playing throughout, with particular shout-outs to the brass and to Oboeist Anne Marie Gabriele. Manze’s period-performance background was evident in his brisk, no-nonsense tempos led with a minimum amount of rubato. This performance of a work probably completed in 1826 looked backward to Beethoven, rather than forward to Brahms and Schumann, whose symphonic works were yet to come, which is a perfectly reasonable and enjoyable approach to take.

HEMIDEMISEMIQUAVERS:
• Speaking of conductor moving beyond their perceived specialty, Nicholas McGegan, Music Director of the Philharmonia Baroque Orchestra in San Francisco and Principal Guest Conductor of the Pasadena Symphony, will be on the Bowl podium Tuesday and Thursday.

By contrast, Thursday’s program features Weber’s Oberon overture and Schumann’s Symphony No. 3 (Rhenish), along with Mozart’s Piano Concerto No. 20, K. 466, with Garrick Ohlsson as soloist. The program will be a collaboration with the J. Paul Getty Museum, which is holding a retrospective of paintings by Théodore Roisseau. Videos created in conjunction with The Getty will introduce much of the music. INFO

• On Aug. 21 cellist Yo-Yo Ma and his Silk Road Ensemble returns to the Bowl for a program of music spanning the globe — no surprise, since the ensemble is comprised of performers and composers from more than 20 countries.

• It would have been fun to meet Piemontesi. My wife and I have made several trips to his hometown, which is just north of the Italian border (thus, his Italian name) on the northern edge of Lake Maggiore (Lago Maggiore). We first visited when we were doing a Eurail trip through Europe and journeyed south through the Gotthard Pass Tunnel (the old one, not the one recently opened) to escape a rainy day in Lucerne. We were enchanted and returned several times to visit, so reading of Piemontesi’s hometown brought back a lot of pleasant memories.
_______________________