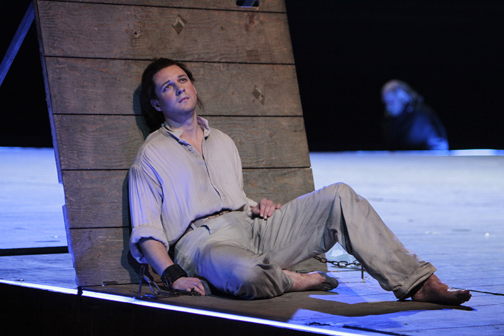 Benjamin Britten’s opera Billy Budd can be approached from several — perhaps dozens of — perspectives: religious, political, sexual, etc. It has allusions to the operas of Verdi and Wagner who, like Britten, celebrated important birthdays last year (200 for the first two and 100 for Britten).

But first and foremost, Billy Budd is a gripping drama with a marvelous musical score. Liam Bonner, who made his role debut last night, told me last week that he believed most people would come to the opera first through the drama and then through the music.

Last night, in the first of six performances, Los Angeles Opera succeeded marvelously on both important points. I was on the edge of my seat right to the end and my wife stayed awake all evening — the highest of praise. Everyone involved — cast, orchestra and, in particular, the men of the LA Opera Chorus — sang, played and acted Britten’s music wonderfully. With this production, the company’s multi-year “Britten 100/LA” celebration is ending on an extremely high note.

Britten wrote the original version of Billy Budd in 1951, using a libretto written by E.M Forester and Eric Crozier. In 1960, Britten revised the opera from four acts to two acts plus a prologue and an epilogue. This later version is now standard and is being used here.

Billy Budd is unique in several ways. The cast of more than 20 and a chorus of 46 men and 10 boys (from the Los Angeles Children’s Chorus), plus 14 fighters and supernumeraries, are all men. In his typically erudite pre-performance lecture, Music Director James Conlon noted nobody had every done that in an opera before. The orchestra of more than 70 was the largest Britten ever used, including in Peter Grimes.

However, Billy Budd has similarities to Britten’s other two big operas: Peter Grimes and Death in Venice. Most apparent is the fact that all three operas use the sea as their locale. In the case of Billy Budd, that’s literally true because the entire opera takes place on an English warship, the HMS Indomitable, sailing the Atlantic in 1797 in search of the French.

In Francesca Zambello’s spare but highly effective production — created in 1985 with sets and costumes by Alison Chitty and last seen in Los Angeles in 2000 — that ship is a large triangular plank that juts from the stage over the orchestra pit; part of the plank raises to form a battle station and the captain’s cabin. Ropes and a mast add verisimilitude to the atmosphere aided, particularly in the last scenes, by Allen Burnett’s lighting design. Director Julia Bevzner moved the action along smoothly.

Bonner, a baritone from Pittsburgh, is creating the title role for the first time and last night the world discovered it’s next great Billy Budd. At age 32 (and seeming much younger) Bonner really looks the part of the sweet, innocent young man. But this was no one-dimensional performance. Bonner sang with impressive power and pathos throughout the evening, particularly in his final soliloquy in which he praises Captain Vere, the man who ultimately condemned him. Equally important, his acting was subtle and thoughtfully conceived from beginning to end, and he deserves special kudos for dangling quietly for 10 minutes following his hanging near the opera’s end. 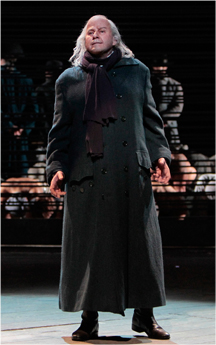 As Vere, veteran tenor Richard Croft (right) at times displayed the sort of gleaming voice Britten always favored in his tenors (particularly his life partner, Peter Pears) but in other scenes Croft’s voice turned appropriately steely. His anguish in the scene in which he must choose between enforcing the King’s strict justice over compassion for Billy Budd was heart-rending, as was his concluding epilogue.

Greer Grimsley, making his LAO debut as the evil John Claggart, a Britten-esque Iago, brought Wagnerian fervor to the role. As usual LA Opera has assembled a very strong ensemble cast; that ability has been one of the company’s strengths during its recent run of Britten operas, including The Turn of the Screw and Albert Herring.

Among the many cast members, special mention goes to James Creswell as Dansker, Keith Jameson as Novice and, in particular, Greg Fedderly as Red Whiskers. The men of the Los Angeles Opera Chorus, a vital part of the opera, acted and sang splendidly throughout the evening while successfully negotiating steep stairs and scrambling up and down ropes.

Conlon has a deep and abiding love for Britten and that shows every time he steps into the pit for one of the composer’s operas. Last night was no different as Conlon and the orchestra played the score with equal portions of grandeur and grace. Never has a three-hour-long evening flown by so quickly. 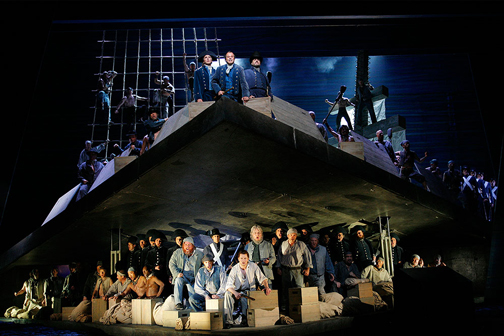 The crew prepares for battle aboard the HMS Indomitable in Francesca Zambello’s staging of Benjamin Britten’s “Billy Budd.” Photo by Robert Millard.

Hemidemisemiquavers:
• LA Opera has a number of articles in the “Learn More” tab of the Billy Budd section of its Web site HERE. They and the synopsis provide good reading ahead of time, particularly if you’ve never seen the opera before. The opera portion of the printed program is also available for downloading. And, of course, don’t miss Conlon’s frenetic, pre-performance lecture.
• The final performance of Billy Budd overlaps the beginning of Donizetti’s Lucia di Lammermoor, which opens on March 15 in a new production that stars Russian soprano Albina Shagimuratova in the title role. DETAILS.
_______________________