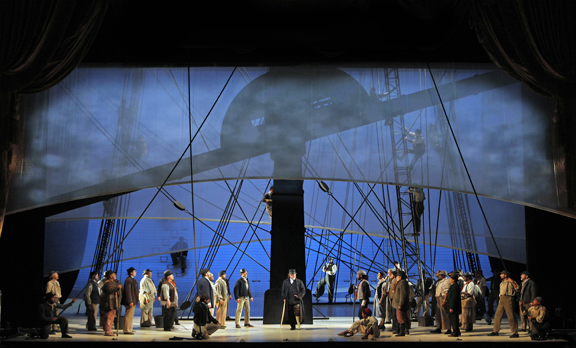 There’s a healthy dose of the familiar to Los Angeles Opera’s 30th anniversary season, which was formally unveiled yesterday, but enough new and/or interesting to make the 2015-2016 schedule worth considering when laying out your long-range plans.

The season will have six productions, totaling 38 performances, and two recitals — including a 30th anniversary gala pairing of Plácido Domingo and Renée Fleming on March 16, 2016 with James Conlon conducting the LA Opera Orchestra — in the Dorothy Chandler Pavilion. There will also be five offerings (13 performances) in the company’s “Off Grand” series (i.e., locales outside the Pavilion).

As has been the case in recent years, LAO Music Director James Conlon will conduct four of the six Pavilion productions. He won’t be leading the opening offering — Puccini’s Gianni Schicchi and Leoncavallo’s Pagliacci — nor the last production, Puccini’s La Boheme (see below for details on these).

Among the Pavilion highlights:
• The Los Angeles premiere of Jake Hegge’s Moby-Dick, with Jay Hunter Morris singing the title role. This was originally a co-production of five companies, including San Diego Opera — I loved it when I saw it there. Opens Oct. 31 for six performances.
• A revival of the highly successful 2013 Barrie Kosky production of Mozart’s The Magic Flute, featuring sets that evoke the silent-film movie era. Opens Feb. 13, 2016 for six performances. Another in the “don’t-miss” category.
• The season-opening double bill will revive the company’s Woody Allen production of Gianni Schicchi, with Domingo singing the title and Grant Gershon, LAO’s resident conductor, leading the orchestra. After intermission, in an idea that only Domingo would think of, he will change clothes, wipe off makeup and pick up the baton to conduct Pagliacci. Opens Sept. 12 for six performances.
• The season concludes with Los Angeles Philharmonic Music Director Gustavo Dudamel making his company debut leading the final two performances of La Boheme on June 10 and 12, 2016. Italian born conductor Speranza Scappucci makes her company debut leading the first four performances. Opens May 14 for eight performances.

Among the “Off Grand” productions
• Philip Glass and the Kronos Quartet will perform Glass’ score to the classic 1931 film Dracula (starring Bela Lugosi) Oct. 29-31 at the recently restored Theatre at Ace Hotel, a 1927 Spanish Gothic movie palace in downtown Los Angeles that was once a United Artists flagship movie theatre.
• The world premiere of Anatomy Theatre by PulitzerPrize-winning composer David Lang and visual artist Mark Dion will mark the second collaboration between LAO and the Beth Morrison Projects at REDCAT (the Roy and Edna Disney/Cal Arts Theatre) located in the Disney Hall complex. June 16-19, 2016. Incidentally, the first of these collaborations, Dog Days, opens June 11 (2015). Information: www.laopera.org