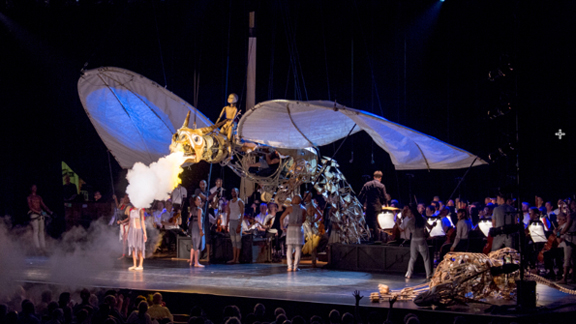 The concluding scene from Handspring Puppet’s reimagination of Stravinsky’s “The Firebird,” with the Chicago Symphony at the Ravinia Festival. The dazzling production was performed with the Los Angeles Philharmonic last night at Hollywood Bowl. Photo by Patrick Gipson.
• More information on the Firebird creative team is HERE.
______________________

When most classical music lovers think of Igor Stravinsky’s The Firebird, they think first of the three suites that Stravinsky extracted for orchestra, especially the 1919 version. Less heard is the complete 50-minute score, which Stravinsky composed for the 1910 Paris season of Sergei Diaghilev’s Ballets Russes, with choreography by Michel Fokine.

But just as it’s virtually impossible to hear Paul Dukas’ The Sorcerer’s Apprentice without seeing the movie Fantasia’s sequence of Mickey Mouse and his dancing brooms, it’s going to be hard for those of us at Hollywood Bowl last night to hear the full 50-minute Firebird score again without thinking of the riveting, dazzling production of dancers, gymnasts and larger-than-life-size puppets that Handspring Puppet Company — the firm that brought War Horse to life on Broadway — used to portray the mythical story.

Director Janni Younge and choreographer/puppet designer Jay Pather led the creative team. The program book listed more than two-dozen folks who worked on the show, plus a cast of 15 (Jackie Manyaapelo performed the key role of “The Seeker”). The Los Angeles Philharmonic was led by guest conductor and former Dudamel Fellow Ben Gernon, who was making his Bowl debut

Since comparatively few people (except for hardcore dance lovers) have every seen a performance of the Firebird ballet, the fact that Younge and Pather elected to shift the locale to contemporary South Africa probably made little, if any, difference to most of the audience’s appreciation of the gripping performance.

Indeed, there’s something to be said for simply sitting back and watching what transpired without trying to make any sense of either the original story or this revised version. At least, that’s my story and I’m sticking to it — others more in the know on ballet can comment on this version’s veracity.

Actually what we saw were two productions: the one on stage and the one that appeared on the large-screen monitors adjacent to the shell. From where I was sitting, the video cameras bathed the performance in a deep blue hue, which meant that often the effect on screen was quite different than what we were seeing on stage. Moreover, if you happened to look over at the correct time, the monitors provided descriptions of each ensuing scene, not necessarily corresponding to the South African take on the story. 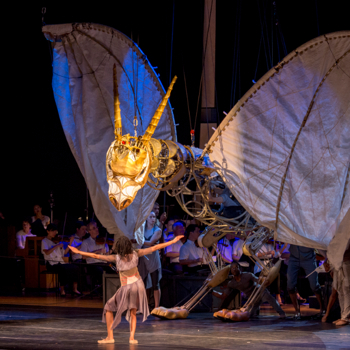 Suspended above the stage was a large white object that looked like a professional photographer’s light umbrella. Throughout the production, it was used as a scrim for various images and at the conclusion devolved into the Firebird (pictured left). The dancers/gymnasts whirled around the stage and manipulated the puppets with moves that reminded me of what we will see from the gymnastic floor exercises during the upcoming Olympic Games. In a week where dance is an integral part of each program, this one was the highlight.

Gernon and the Philharmonic delivered a strong performance of the score, which has been a LAPO staple since the days of the Phil’s Conductor Laureate, Esa-Pekka Salonen. The orchestra appeared to be pushed farther back into the shell to accommodate the dancers, and whether it was because of that placement, the cool weather or other reasons, for the first time this summer the amplification verged on distorting the sound. A couple of obnoxious helicopters didn’t help things, either.

Those issues were also apparent in the first half of the program, which paired Debussy’s La Mer with Britten’s Four Sea Interludes from his opera Peter Grimes — ask not what this had to do with The Firebird!

The opening section of La Mer seemed very choppy, more note by note than long swirling lines. At the beginning Gernon beat virtually every note, long and small, for an orchestra that knows this music quite well and didn’t need that sort of micro-managing. He seemed to relax from the second section on and the Britten performance was much more effective and evocative.

This Firebird production has been playing at U.S. outdoor festivals throughout the summer. It concludes next week with two performances with the Philadelphia Orchestra at the Saratoga Performing Arts Center in upstate New York. Too bad there wasn’t a second performance at the Bowl — it would have been worth seeing again.

HEMIDEMISEMIQUAVERS:
• Tonight and tomorrow night, LAPO Music and Artistic Director Gustavo Dudamel concludes his Bowl work for this summer by leading the annual “Tchaikovsky Spectacular” concerts. In addition to the traditional 1812 Overture with the Bowl’s marvelous fireworks by Souza to conclude the program, Dudamel and the orchestra will be joined by four members of the American Ballet Theatre who will perform two pas de deux sequences from Swan Lake. The orchestra will also play instrumental portions from the ballet, along with Tchaikovsky’s Capriccio Italien. INFO
• Next Tuesday and Thursday, early-music specialist Andrew Manze takes the Bowl podium. The Tuesday concert is all-Mozart (INFO), while Thursday night’s program pairs Schubert’s Symphony No. 9 (“Great C Major”) with Beethoven’s Piano Concerto No. 4, with Francesco Piemontesi making his LAPO debut as soloist (INFO).
_______________________