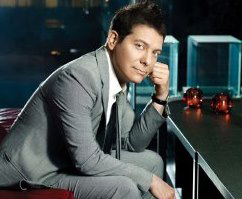 Michael Feinstein performing the music of Frank Sinatra would seem to be a perfect fit. After all, Feinstein has made a career of curating, promoting and performing “The Great American Songbook” and no one belongs in that genre more than “Ol’ Blue Eyes.”

For the second consecutive year it was a perfect fit as Feinstein and the Pasadena Pops, led by its resident conductor, Larry Blank, presented “The Sinatra Project, Vol. 2” last night at the Los Angeles County Arboretum.

For the second consecutive year it also was boffo box office as a sold-out audience packed the tables and sprawled on the The Giant Lawn of the Arcadia facility.

As usual, Feinstein, the orchestra’s Principal Pops Conductor, mixed Sinatra favorites with pieces that had been unperformed for decades — or at all. Feinstein provided his typically erudite commentary, which was compact enough that the entire program clocked in at slightly more than just two hours, even allowing for CEO Laura Unger’s gushing thanks to the evening’s sponsors and a lugubrious rendition of The Star-Spangled Banner, led by Concertmaster Aimee Kreston.

One thread to the evening was Feinstein’s use of arrangers indelibly linked to Sinatra, including Nelson Riddle and Ruby Bloom. Blank also offered a couple of his arrangements and led the Pops as it played well both as an orchestra and a ’30s-style jazz band.

As is typical of Feinstein programs, he offered a couple of “discoveries”: Blank’s arrangement of Orange, and a complete performance of Three Coins in the Fountain (Sinatra recorded the title song for the 1954 movie but what was used wasn’t the complete version that Sammy Cahn and Julie Styne created).

Throughout the evening Feinstein played every role but conductor: singing some of the songs (such as Something’s to Give) accompanied by the orchestra, some (e.g., I’ve Got a Crush on You) from the piano, and Birth of the Blues, where Feinstein offered a spiffy piano solo.

Perhaps the most poignant piece was If I Loved You, from Rodgers and Hammerstein’s movie Carousel. Feinstein preceded this by noting the familiar story about why Sinatra elected not to appear as Billy Bigelow in the movie — he didn’t want to have to record each scene twice, once in standard format and the other in widescreen, which was necessary in those days.

However, Feinstein offered a different version, courtesy of Shirley Jones (the female star), who said Sinatra was afraid that his wife, Ava Gardner, would have an affair with Humphrey Bogart while they were overseas making a movie, so Sinatra withdrew to join her. It was a typical Feinstein historical note.

The evening concluded with a medley of Sinatra songs, a reprise from the conclusion of last year’s Sinatra Project. If there is to be a Volume 3 it won’t be next year. Instead, Feinstein is slated to sing an evening of Swing Music on July 29 as the third concert in the 2017 summer season.

This year’s season continues on August 20 with Feinstein conducting the Pops in music by Cole Porter (INFO) and concludes on September 10 with an evening of music from Warner Bros (INFO). 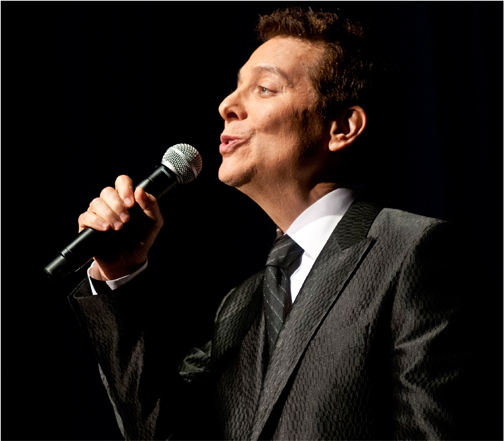 When Michael Feinstein steps onto the stage Saturday night at the Los Angeles County Arboretum, he will be in an unfamiliar role, at least for Pasadena Pops concerts. Rather than appearing as Principal Conductor (the orchestra’s Resident Conductor, Larry Blank, will be waving his baton, instead) Feinstein will spend the evening crooning music by George and Ira Gershwin, songs that are dear to his heart and an integral part of “The Great American Songbook” (LINK), a project on which Feinstein has focused his career and life for more than 20 years.

“I fell in love with the Gershwins’ music at a very early age,” said Feinstein in an interview recently, “and then had the opportunity of knowing and working with Ira Gershwin for six years. He taught me much of what I know about this music and how to perform it. This program will be an affectionate tribute to their collaboration, filled with anecdotes that are often humorous and illuminating.”

Feinstein has created some new arrangements for this concert; he will also include classic sets. “For example,” says Feinstein, “I will do one piece with lyrics by Ira and music by another composer, called Tchaikovsky. It was introduced by Danny Kaye and I perform it with Danny’s original orchestration. There will be a medley of songs that George put together for Fred Astaire that I have arranged. I perform different ‘chestnuts’ in different ways, with different styles. So this is a fresh look at this iconic music.”

Music of the Gershwins is a quintessential example of “The Great American Songbook,” believes Feinstein. ‘This is a body of work that began in the earlier part of the 20th century, crystalizing in the 1920s and continues today,” he explains. “It contains music and lyrics that transcend their time — they have a timeless quality that appeals to contemporary audiences.”

Feinstein isn’t the only person to work with this concept; three years ago Thomas Hampson traveled throughout the United State States and Europe performing recitals of music from this collection and as long ago as the 1950s Ella Fitzgerald was recording music by Rodgers and Hart that she termed a “song book.”

Nonetheless, “The Great American Songbook” is Feinstein’s passion. “There are a few songs from the early 1900s that survive — Stephen Foster and Victor Herbert, for example,” says Feinstein, “but the creations that began in the 1920s had a certain level of sophistication in the words, a clever turn of phrase, that not only has appeal today but continues to speak to the human condition. It is time that determines what lasts, not someone saying, ‘This is part of The Great American Songbook.”

Mining that collection produces consistently distinctive concerts for the Pasadena Pops (Feinstein is in his second year as the ensemble’s principal conductor). “Pasadena is an extension of my love for The Great American Songbook,” says Feinstein, “but the concerts a very different experience because it’s a symphony orchestra playing these arrangements. Often ‘pops’ concerts are dumbed-down arrangements of songs that are, for want of a better word, ‘schlocky,’ kind of generic and boring. Our programs are not elevator music; this is music of true harmonic substance, played by a great orchestra.

“Moreover,” he continues, “this is often ‘new music’ for the musicians. ‘Pops’ orchestras traditionally play certain pieces of music but there’s very little that the Pasadena Pops Orchestra is accustomed to in our concerts. That keeps things fresh. Things like Saturday’s Gershwin concert are fun for me and for the musicians, as well. I want to create programs that I would enjoy attending.”