Kirshbaum and Wosner play Beethoven’s complete cello sonatas over the course of two nights, along with music by Mozart and Handel. Kirshbaum is chair of the strings department at the USC Thornton School of Music and holds the school’s Gregor Piatigorsky Chair for Violincello.

BONUS: Kirshbaum and Wosner recently issued a CD of this music.

As we close in on the centennial of Leonard Bernstein’s birth (Aug. 15, 2018), McCoy Rigby Entertainment brings its production of the composer’s best-known work to VPAC. Next month it begins a run at the La Mirada Theatre for the Performing Arts (INFO).

Guest conductor Jaap van Zweden, incoming music director of the New York Philharmonic and continuing in the same role at the Hong Kong Philharmonic, conducts the LAPO in the fifth symphonies of Beethoven and Shostakovich.

BONUS: This represents a chance to compare and contrast the LAPO performance of Shostakovich’s fifth symphony with the St. Petersburg Philharmonic on March 16 at VPAC (see below).

The St. Petersburg Philharmonic and its longtime conductor, Yuri Temirkanov, are ending a cross-country U.S. tour with concerts in California. The OC concert is Ravel’s Daphnis and Chloe, Suite No. 2, selections from Prokofiev’s ballet score Romeo and Juliet, and the Russian composer’s Violin Concerto No. 2, with Japanese violinist Sayaka Shoji as soloist.

The VPAC concert is Shostakovich’s Symphony No. 5 and Brahms’ Piano Concerto No. 1, with Garrick Ohlsson as the soloist. So, as noted above, this concert gives us a chance to compare the L.A. Phil with the folks from St. Petersburg who have Shostakovich in their collective DNA. 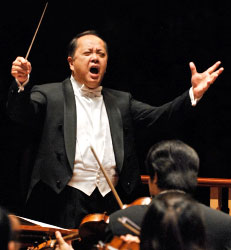 “Going out in a blaze of glory” may be a hackneyed phrase but it was applicable to yesterday afternoon’s concert at Ambassador Auditorium that concluded the Pasadena Symphony’s 86th season. Guest conduct Jahja Ling (left) and the musicians ended the program with a scintillating and superbly played performance of Shostakovich’s Symphony No. 5 in D Minor.

And yet it wasn’t the brass blazing or percussion thundering in the final measures that was the highlight for this critic. Instead, it was the expansive “Largo” movement, a symphony for strings with occasional woodwind and harp interjections that Ling and the orchestra delivered sumptuously. Shostakovich divided each of the string sections into two components (three for the violins) and Ling expertly delineated each of the sections in a way that was unusually comprehensible to those in the auditorium.

Surrounding that languid third movement, Ling — who just completed his 10th season as music director of the San Diego Symphony — drove the opening and closing movements forward with relentless urgency and caught all of the sardonic, lurching humor in the “Allegretto” second movement.

The orchestra, which always seems to relish playing music by this 20th century composer, was in top form again in yesterday’s performance. Although Ling singled out many individuals in the winds and brass sections during the bows, he asked the strings to stand en masse, which was a pity because he might well have asked the split sections to take their own bows.

Pairing Shostakovich’s fifth symphony with Tchaikovsky’s Piano Concerto No. 1 turned out to be an excess of bombast. There were, of course, dangers of over-exposure. If Tchaikovsky’s first isn’t the most-played concerto ever written, it’s No. 1A to George Gershwin’s Rhapsody in Blue, especially in Southern California where, because of outdoor and indoor concerts, we hear several performances of each most years. Nonetheless, the combination proved to be a savy marketing move. Yesterday afternoon’s audience appeared to easily be the largest this season and the evening concert was nearly sold out.

The soloist yesterday was 38-year-old Israeli-born pianist Shai Wosner, who has made quite a good reputation recently playing Schubert and Mozart, but has come very late to this famous work, which he was performing in public for just the third time. In his preconcert Q&A yesterday, Wosner admitted candidly, “I’m still unwrapping this work and trying to get my mind around it. Perhaps by the 150th time I will fully understand it.”

His inexperience showed. Wosner delivered an ultra-cautious performance that had only the minimum amount of dazzle, although his decision to focus on sensitive nuance at the expense of bravura had its compensations. In the end, however, at least this listener wished he had elected to program a Mozart concerto instead for his PSO debut.

Hemidemisemiquavers:
• In that preconcert session, Wosner — who studied at The Juilliard School with Emmanuel Ax — said that famous mentor taught him that “what you hear onstage may be different that what they [the audience] hear. The best performances are when those two views come together.”
• This was the last concert of a four-year-run to be led by guest conductors. PSO management said that ticket sales for the 2013-2014 season exceeded goals by 30%.
• Beginning Nov. 1, the 2014-2015 season will have either Music Director David Lockington or Principal Guest Conductor Nicholas McGegan on the podium. My preview is HERE.
• Joseph and Elizabeth Kahn’s program notes yesterday called the first piano concerto and violin concerto “Tchaikovsky’s two most popular works,” a questionably sweeping statement that tosses aside the 1812 Overture, the Nutcracker, and the composer’s fourth, fifth and sixth symphonies.
• The PSO takes a four-week break before reincarnating as the Pasadena Pops, which performs a five-concert summer series at the Los Angeles County Arboretum under the baton, keyboard and vocals of Principal Conductor Michael Feinstein. Info: www.pasadenasymphony-pops.org
_______________________

Jeffrey Kahane has announced that he will step down as music director of the Los Angeles Chamber Orchestra at the end of the 2016-2017 season, concluding a 20-year reign as the orchestra’s fifth and longest-serving music director. Kahane will assume the title of music director laureate and the orchestra has launched a search for his replacement.

“Twenty years is a very long tenure for any music director,” said Kahane in a statement. “I really felt it was time to pass the torch, as difficult as it is to move on, and 20 years seemed like a good round number.”

Although he had been music director of the Santa Rosa Symphony, Kahane was far better known as a pianist than as a conductor when, at age 41, he replaced Iona Brown at LACO’s helm. It was a dark time for the orchestra, which only recently had emerged from bankruptcy. However in the succeeding 17 years, Kahane and the orchestra have grown and flourished together.

He expects to continue his burgeoning guest conducting, solo piano and chamber music careers, and said he has no plans at the present to take on another music director position.

LACO will be the second local ensemble in search mode. Earlier this season, Enrique Arturo Diemecke announced that this would be his last season as music director of the Long Beach Symphony. Given that LACO has a three-year lead-time before Kahane leaves, it’s possible that the transition to his successor might be virtually seamless.

• The Pasadena Symphony, which knows quite a bit about the ins and outs of search processes, concludes its 2013-14 classics series on May 10 with concerts at 2 p.m. and 8 p.m. at Ambassador Auditorium. If you like your music big and bold, this is the program for you. Jahja Ling, music director of the San Diego Symphony for 10 years, will lead Shostakovich’s Symphony No. 5 and Tchaikovsky’s Piano Concerto No. 1, with Israeli-born pianist Shai Wosner as soloist in the concerto. Information: www.pasadenasymphony-pops.org

• Speaking of pianists playing big concertos, the next two Los Angeles Philharmonic concerts fit that description. This Thursday, Friday and Saturday at Walt Disney Concert Hall, Emmanuel Ax will be soloist in Brahms’ Piano Concerto No. 2. The Thursday and Saturday concerts also include Ax as soloist in the world premiere of Release, a LAPO commission by Andrew Norman, who happens to be LACO’s composer-in-residence. Music Director Gustavo Dudamel returns to town for the month of May; he opens this weekend’s concerts with Brahms’ Academic Festival Overture.

On May 8-11, Lang Lang comes to town to appear with the Phil as soloist in Prokofiev’s Piano Concerto No. 3, with Dudamel leading the Phil in Ravel’s La Valse and Valses nobles et sentimentales, along with Venezuelan composer Paul Desenne’s Sinfonía Burocratica ed’ Amazzonica. Information: www.laphil.com

• Finally, continuing in the monumental-works mode, preeminent American organist Paul Jacobs comes to Disney Hall next Sunday at 7:30 p.m. to play Johann Sebastian Bach’s complete Clavier-Übung III, which begins and ends with one of Bach’s most famous works, the Prelude and Fugue in E-Flat Major, BWV 552 (St. Anne). Information: www.laphil.com
_______________________