When Jeffrey Kahane (pictured right) began planning “Lift Every Voice,” the two-week long festival that would be the centerpiece of his 20th and final season as music director of the Los Angeles Chamber Orchestra, he had no idea of the tumultuous times in which this nation now finds itself.

And when he chose the West Coast premiere of Bruce Adolphe’s Violin Concerto as the centerpiece of last night’s concert, which would mark the midpoint of the festival, he had no idea that last night’s performance of the concerto, subtitled, “I Will Not Remain Silent,” would come on the day when more than a million people marched and rallied for causes of justice — particularly women’s justice — and against what they see as the oppression of the newly inaugurated President of the United States, Donald Trump.

As Kahane has said in multiple interviews (including one with me — LINK), “Lift Every Voice” is about the concepts of civil rights and justice for all, although much of the focus is on what transpired in Nazi Germany. Moreover, as Kahane noted in a talk preceding the concerto’s performance, “The struggle goes on. The process is never finished.”

Adolphe’s 35-minute long concerto is a tribute to Rabbi Joachim Prinz (1902-1988), who was a relative of Adolphe’s wife and foresaw the coming horrors of the Nazis. Prinz warned people to flee and ultimately (after being arrested three times) emigrated to the United States in 1937, where as a rabbi in Newark, New Jersey, he immersed himself in the Civil Rights movement of the 1950s and 1960s.

“I Will Not Remain Silent” (which comes from Isaiah 62:1 in the Hebrew Scriptures of the Bible) was the title of the address Prinz gave at the 1963 March on Washington immediately preceding Dr. Martin Luther King Jr.’s “I Have a Dream” speech. 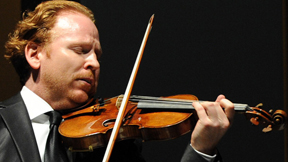 Against that backdrop, it’s no surprise that violinist Daniel Hope — whose parents fled South Africa due to their opposition to apartheid six months after he was born in 1973 and settled in England and who now lives in Germany — would give an impassioned performance of the two-movement work.

The first movement, meant to depict Prinz’s struggle’s in Nazi Germany, was ferocious in its concept with the orchestra’s percussion and brass sections adding weight to Hope’s fiery solo playing. The second movement, which describes Prinz’s fight for African-American civil rights in the U.S., gave Hope’s sweet, silky upper tones a chance to shine forth, then ended with a violin cadenza that leads to the piece’s dissolute ending.

Kahane and the orchestra offered impassioned support to Hope, who plays in nearly all of the 20 minutes of music. Hope encored with a rich, soulful rendition of Maurice Ravel’s Kaddish.

To open the concert, Kahane, Hope and LACO gave the U.S. premiere of English composer’s Paul Bateman’s arrangement of six Kurt Weill songs for violin and orchestra. Hope and Kahane danced playfully through the set, which began with Havanna Song from The Rise and Fall of the City of Mahagonny and concluded with Weill’s most famous song, Mack the Knife from Three Penny Opera.

As Dr. Christine Lee Gengaro wrote in her music notes, this song suite was meant to represent the transition from Weill’s career in Germany to his time after he emigrated to the U.S. in 1933 (his Jewish roots and the nature of his music both made him an anathema to the Nazis). Hope and Kahane (who conducted without a baton and seemed to be thoroughly enjoying himself) both had a good time with Weill’s jazzy, syncopated music as interpreted by Bateman. 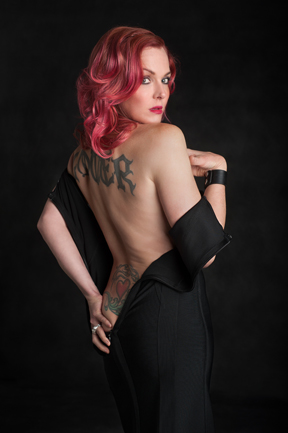 After intermission, Kahane, LACO, vocalist Storm Large (pictured left) and the vocal quartet Hudson Shad delivered a mostly satisfying performance of Weill’s The Seven Deadly Sins. As was the case with all three works, this was the first LACO performance of this piece, which received mixed reviews when it premiered in 1933 and only began to gain popularity after Weill died in 1950.

Weill combined with Maxwell Anderson and Berthold Brecht on this work, which tells the story of a woman with a split personality (Anna I and Anna II), who leaves her home in Louisiana and travels the country hoping to make enough money to send back to her parents to build a home in her native state. Along the way, the girl(s) are bedeviled by the seven deadly sins in the cities they visit (an unnamed town, Memphis, Los Angeles, Philadelphia, Boston, an unnamed Tennessee town, and, finally, San Francisco), before finding their way back home.

In its original form Anna I was performed by Weill’s wife, Lotte Lenya, with Tilly Losch dancing the role of Anna II. However, Large — with minimal props — did an excellent job of portraying both sides of Anna with the appropriate amount of sauciness and sexuality. Moreover (spoiler alert if you’re coming tonight), to keep the piece current, midway through the performance she donned a knitted, pink cap.

The male quartet acts as a sort of Greek chorus playing Anna’s family. Unlike Large, their diction was frustratingly uneven, except when Wilbur Pauley was singing his sonorous bass solos (that may have been the result of the music or the amplification in the Alex Theatre).

As an encore, Large and LACO presented a throbbing performance of Stand Up for Me, a piece Large wrote for marriage equality. Most of the audience stood during at least part of the moving rendition.

• Kahane and Hope were on hand Friday morning for a screening of Hope’s documentary Terezin — refuge in music before several hundred high school students and a few assorted others at the Mary Pickford Center for Motion Picture Study. The 70-minute documentary centered around two survivors (at the time of the filming) of the concentration camp, called Theresienstadt in German and known, ironically, as “The Paradise Ghetto.”

The documentary was filled mostly in the camp. The comments from the survivors — 104-year-old pianist Alice Herz-Sommer and 90-year-old jazz guitarist Coco Schumann — were poignant and the story was framed by music and readings from Hope and mezzo-soprano Anne Sophie von Otter. The students were spellbound, to judge by the lack of noise, and their questions of Hope and Kahane afterwards were thoughtful and probing.

• The festival concludes next weekend with a performance of Weill’s Broadway musical-theatre piece, Lost in the Stars, which is based on Alan Paton’s anti-apartheid novel, Cry the Beloved Country. Anne Bogart directs the production, which features members of her SITI Company, the Albert McNeil Jubilee Singers, members of the Renaissance Arts Academy, and others. This is the first time this work has been presented in Los Angeles since the 1950s. Information: www.laco.org

• Concertgoers got a first look at LACO’s 50th anniversary season, which begins on Sept. 30. With no one yet named to succeed Kahane, five of the eight orchestra concerts will be led by guests (some of whom are returnees). Kahane will come “home” to lead one concert set and Concertmaster Margaret Batjler will lead performances of Bach’s complete Brandenburg concerti. Provocatively, no one is listed as conducting the final concerts in May.

The season will spotlight Mozart’s final three symphonies and will include the world premiere of a new violin concerto written by Andrew Norman.