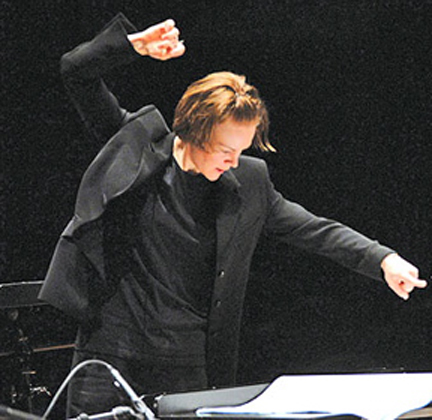 There’s so much to digest in the Los Angeles Philharmonic’s 2017-2018 season that it will probably take me at least two Blog posts to unpack even most of it — three if you count the “Calendar Alert” post I put up earlier this morning (LINK). Bottom line: the orchestra’s 99th season is the most exciting, interesting collection of programs that I can ever remember from an orchestra.

Some of this comes through the flowering of several initiatives that have been planted during the past few seasons — e.g., inSIGHT, Casual Fridays, the Oscars. Others are the continuing maturation of projects that are the envy of many ensembles around the country, especially the “Green Umbrella” series.

Moreover, there are conductor relationships that the Phil has been nurturing for decades, beginning with Music and Artistic Director Gustavo Dudamel who will conduct 12 weeks next season, his ninth heading the orchestra, plus the annual opening gala concert.

Dudamel will also lead the Phil on a tour to the east coast, London and Paris next spring. In addition to the Phil, members of YOLA (Youth Orchestra of Los Angeles) will journey to London to work with young musicians from Great Britain as part of a national youth orchestra conference.

Incidentally, four of the season’s conductors will be women — Mälkki, Gražinytė-Tyla, Emmanuelle Haïm and Xian Zhang — which may be a record for the Phil and is light years ahead of most U.S. orchestras.

The season will also include three top-flight visiting orchestras, the first two making their Disney Hall debuts: the Chicago Symphony on Oct. 22, with Ricardo Muti leading Brahms’ second and third symphonies; the Marinsky Orchestra on Nov. 1, with Valery Gergiev conducting music by Shostakovich, Prokofiev and Scriabin; and Michael Tilson Thomas and the San Francisco Symphony on March 27, playing Mahler’s Symphony No. 5 and Berg’s Violin Concerto, with Gil Shaham as soloist.

What about programming, you ask? That’s for my next post, but here’s a teaser: although there’s a healthy sampling of music for traditionalists, Lisa Hirsch writes on her Blog, “Iron Tongue of Midnight,” that among the 81 composers on the schedule for the various components of the Phil’s season, 31 of them are alive and at least 17 others were composing in the 20th century. The Phil’s media release lists 23 commissions, 22 world premieres, six U.S. premieres and two west coast premieres during next season.

More on all of that in my next post (probably tomorrow).