Read my preview of the Pasadena Symphony’s season-opening concert on Saturday HERE.

Like any business and top executives, orchestras and their music directors undergo cyclical lives — it’s just that when an orchestra changes its music director it’s newsworthy, at least in its hometown or region.

In Los Angeles, we’ve gotten a bit spoiled because both the Los Angeles Philharmonic and Los Angeles Chamber Orchestra have enjoyed great longevity in their musical leadership. Esa-Pekka Salonen served as the L.A. Phil’s music director from 1992 through 2009 and his successor, Gustavo Dudamel, came on board immediately after Salonen stepped down.

On the other side of the coin, the Pasadena Symphony has now settled its musical leadership team. Michael Feinstein returns this summer for his second season as the Pasadena Pops’ principal conductor, and Music Director David Lockington and Principal Guest Conductor Nicholas McGegan will divide duties for the PSO’s upcoming season as they begin their tenures with the orchestra.

In some ways, Long Beach’s situation parallels the Pasadena Symphony when it severed relationships with its long-time music director, Jorge Mester, in 2010. The LBSO management situation appears more stable than the turmoil that had enveloped the PSO four years ago, so it may not take the length of time that it took the PSO to get its new Lockington-McGegan-Feinstein music leadership team on board but it will undoubtedly take some time to find the right replacement for Diemecke, who has led the LBSO for 10 years.

LACO has more than three years to find Kahane’s replacement but they may need every month . For one thing, Kahane brought unique combination of skills to the position. Among his predecessors, only Sir Neville Marriner and Christof Perick could have been classified as “pure” conductors. Gerard Schwarz was well known for his trumpet skills as for his conducting prowess and Iona Brown did most of her conducting from the first violin chair. Kahane came to LACO with a modest, albeit growing, reputation as a conductor but he was — and is — a high-profile pianist, something he hopes to continue in his post-LACO life.

Moreover, LACO has several musical streams beyond its orchestral series, including its “Baroque Conversations” and “Westside Connections” series. Concertmaster Margaret Batjer has curated the latter series; what influence or changes will a new music director want to make in either or both of these series will be part of the questions involved in naming Kahane’s successor.

In contrast to LACO and Long Beach, the Pasadena Symphony is looking forward eagerly to its new era. Some music directors come to new positions with great overarching themes, but Lockington’s first season as Pasadena Symphony music director has a series of themes interwoven throughout the five programs, each of which will be presented in two concerts at Ambassador Auditorium. 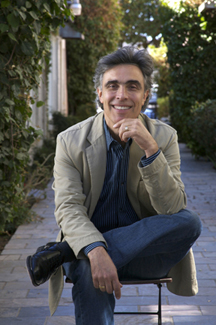 “I suppose if I had to pick one adjective for the season,” said Lockington (right) recently, “it would be ‘colorful.’ “ The PSO’s 2014-2015 season includes a wide range of music, from Baroque to contemporary, with a healthy selection of American music sprinkled throughout the five programs.

Lockington and McGegan will alternate in leading the five programs. The opening concerts on Nov. 1 will feature an all-American program that says Lockington, “focuses on popular, virtuosic styles” using music by Leonard Bernstein and George Gershwin.

The program opens with Ceremonial Fantasy Fanfare, which Lockington wrote in 2009 for the Grand Rapids Symphony (where he remains music director) in conjunction with a project he championed entitled “ArtPrize.” “The piece features church bells,” says Lockington, “and when we performed it in Grand Rapids the city’s churches rang their bells to coincide with the music.” Unfortunately, Ambassador is too far from Pasadena’s churches to achieve the same effect.

The Nov. 1 concerts will also feature pianist Terrence Wilson as soloist in Gershwin’s Concerto in F. Lockington has never conducted the young African-American pianist but he likes what he has heard. “He plays with great panache,” says Lockington, “with a clear, precise king of brilliance.”

Perhaps the most interesting program is the Feb. 14 concerts, which will be the second that Lockington will conduct. It features Dylana Jenson (who is also his wife and mother of their four children) as soloist in Shostakovich’s Violin Concerto No. 1.

Lockington’s decision to feature his wife as soloist on Valentine’s Day may seem to smack of nepotism but nothing could be further from the truth. A Los Angeles native, Jenson was a child prodigy who studied under Nathan Milstein (among others), shared silver medal in the 1978 Tchaikovsky International Competition, and made Carnegie Hall debut two years later with Eugene Ormandy and the Philadelphia Orchestra. The Shostakovich first violin concerto is a work that Lockington and Jenson recorded in 2008 (along with the Barber Violin Concerto) with the London Symphony Orchestra to great acclaim several years ago.

The program will open with Enter Light, a work by Joel Scheckman, a California native who is a member of the Grand Rapids Symphony clarinet section. “It’s about an eight-minute piece that works beautifully as a lead-in to the violin concerto,” says Lockington. The concert concludes with Beethoven’s Symphony No. 7.

So as LACO and the Long Beach Symphony move forward into uncertain futures, the Pasadena Symphony and Pops appear to be on the threshold of new chapters of stability. Just remember: in a few years (or, if the stars align, decades), the cycles will undoubtedly turn over again.
_______________________