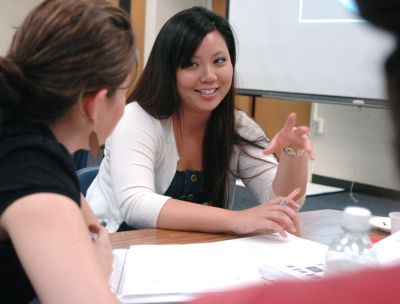 It’s that time of the year. New teachers are receiving their orientation for the beginning of school.

New teacher Krystal Kawamoto, right, talks with a fellow teacher as they learn how to do thinking maps during the three-day orientation at Rowland Unified School District.

Usually from 80 to 100 new teachers join Rowland Unified every year. But this year there were only about two dozens new instructors. Several of those had been laid off from other school districts as far away as San Diego.

“This year we have experienced less retirements — people are working longer due to the uncertainty of the economy and it has affected many of their spouses as well. This has resulted in fewer openings and new hires,” explained Superintendent Maria Ott.

What’s happening in your school district? Are you seeing fewer new faces this year?