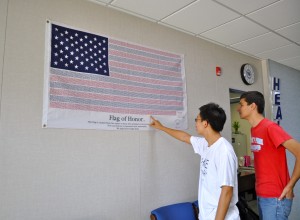 In honor of 9/11 and Patriot Day, students will place nearly 3,000 flags in front of Walnut High School after school today from 3-5 p.m. Members of the Teen Republicans club, advised by social studies teacher Brett Landis, head up the remembrance.

Early this morning, Landis placed a flag with all of the victim’s names in the school office. The Flag of Honor was donated by a Walnut High parent after he saw a previous flag display commemorating the anniversary of the nation’s tragedy.

“The man who gave it to me lost friends in the Tower and he asked if we could display it,” Landis said.

“It’s sad to see all the names. So many people died,” junior David Tragarz said. “It’s a lot of people,” Timothy Yeung agreed.