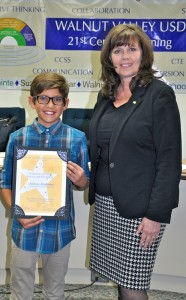 “Since kindergarten, he has taken advantage of several opportunities to become involved in school. He plays saxophone in our school band, sings in the Showcase Choir, won awards in chess and is an assembly greeter which highlights his terrific interpersonal skills,” Principal Janet Green said.

Andrew’s past and present teachers include Jana Young, Karen Breitkreitz, Jill Igarashi-Takayama, Jeff Almberg and Dan Park.  They describe him as “ambitious,” “mature,” and “one of the best when it comes to work hard, play harder.”  He has earned straight A’s in 3rd and 4th grades.

Andrew has been able to do all this with the loving support of his parents who make sure he is enrolled in after-school wrestling, jujitsu and basketball.

“Andrew is also the creative force behind our new Coding Connection Club that is scheduled to launch next week,” Principal Green said.

“He discovered that it’s ‘cool to learn how to code’ during a three-week Summer Institute for the Gifted at UCLA. And he wants to share ways to help design and build apps,” she added.