Join students from Diamond Bar High’s National Honors Society as they perform a Chinese New Year’s puppet show in the Diamond Bar Library from 4 to 5 p.m. on Jan. 22.

The puppet show is based on the timeless story of “The Wishing Tree” by Roseanne Thong. After the program, participants will make make several art activities based on the story to take home and enjoy. Supplies are limited.

This event is appropriate for elementary school students. The library is at 21800 Copley Dr. in Diamond Bar. For more information, call 909-861-4978.

The Walnut High School Choir Department will host a Pancake Breakfast fundraiser on Saturday, Jan. 25 from 7:30 to 10:30 a.m.

The breakfast will be held in the school’s Multipurpose Room and feature continuous entertainment by all five choirs plus selected soloists. Tickets are $7 per person and will be available at the door.

A Prelude to Spring Concert will be presented on Friday, Feb. 13 at 7 p.m.in the Performing Arts Center. Tickets are available at www.seatyourself.biz.

For students who do not have computer access, computers and assistance are available in the Student Services Center during business hours.  The Admissions Office is open Monday throughThursday, 8 a.m. to 7 p.m., and Friday, 8 a.m. to 4:30 p.m.

Before registering, new students are required to activate their personal Mt. SAC portal account at the same website, which provides set-up instructions.  Students will be able to view a registration date and time in their portal account and will not be allowed to register before their assigned time.

The enrollment fee is $46 per unit for California residents, and all fees are due upon registration.

The Diamond Bar High School robotics team is looking for support as it the enters the competition season. The school’s pilot robotics team was formed during the 2010-2012 school year.

Team Sprocket competed in the FIRST (For Inspiration and Recognition of Science and Technology) challenge. The team won the FIRST Robotics Competition (FRC) and qualified for the World Championships. Team 3473 ranked 37th out of 100 teams.

Team 3473 reformed during the 2012-2013 school year. The rookie team garnered sufficient funding to compete in both the Inland Valley Empire and Las Vegas Regional competitions. The team took 11th place out of 49 teams in Las Vegas.

This year, DBHS Team 3473 is back and hopes to have its best season yet!

“The robotics team has taught me things that the controlled environment of an AP class never could – the flexibility it takes to be a good leader and the resilience it takes to adapt to new situations,” described the team’s business captain and returning senior member Grant Shao.

During the past two years, the organization has become more than a school robotics team.

“We like to think of it as one that fosters growth in many different aspects: leadership, teamwork, and responsibility, just to name a few. Through robotics, students can overcome differences through their mutual interests and become united as a family,” said mentor Clark Rucker.

The 2013-2014 goals include winning 1st Place at the Las Vegas Regional Competition; competing in the World Championships in St. Louis, Mo.; inspiring peers to learn more about STEM (Science, Technology, Engineering and Mathematics); reaching out to DBHS and the community with robotics workshops; and volunteering at school and community events.

As the DBHS team enters its third FRC season they aim to finish in the Top 5 at one of the regional events.

“Our members will also enjoy many meaningful experiences in the process,” Shao added.

Team Sprocket needs financial sponsorship to cover the cost of robots and competition expenses. The team is also requesting donations of tools.

“If you have a garage full of tools that you are not using and don’t want – that’s exactly what we need!” Rucker added.

Later, the school board is expected to vote to approve to adopt the District’s  Initial Proposal. What do the teachers’ want and how much can the district afford to give them?

The Rowland Unified School District will conduct another district climate survey to provide feedback on programs and services the district provides.

These surveys provides data to help in the planning of district operations and educational services. Rowland will also hold information meetings this month for parents to learn more about the Common Core State Standards and how it will impact their children.

To participate in the online survey available in English, Chinese, Korean and Spanish, the community can visit the “Your Voice” section of the District website www.RowlandSchools.org and on every school website.

It is also located on the free Rowland Unified School District “Mobile App” available for iOS and Android phones/devices. The District Climate Survey is available now through Jan. 30. Individuals who do not have access to computers may visit any RUSD school to take the survey online, or at the District Office located at 1830 S. Nogales Street in Rowland Heights, phone is (626)965-2541.

The results from the survey will be shared with the community in the “Your Voice” section on websites in the spring.

Parents and interested community members are also invited to attend an informational meeting about the Common Core State Standards that will be implemented next year.

For additional resources and information about the Common Core, a Parent Common Core Toolbox with videos and handouts is located on each RUSD school website or at www.RowlandSchools.org. 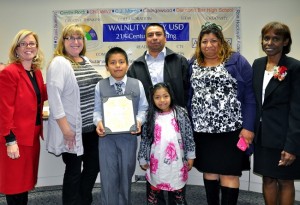 “As a teacher, you get to know a lot of kids. When I learned we got to honor one of our students, I immediately thought of Marco and wrote an email to our staff members,” said   Teacher Kim Horn. The entire Collegewood staff agreed.

“Of all the kids I’ve taught over the years, Marco’s one of those special ones. Marco is my reliable kid,” Horn explained.

When she needed him to help keep track of 27 students during a 4th grade field trip, he did.

During robotics earlier that day when she needed help cleaning up all the wires, he took care of it.

Marco’s that kid that when I retire, I’ll always remember,” she added.

“Marco, our whole staff honors you for your hard work, attitude and resilience. We know you’re going to do great things!” she said. 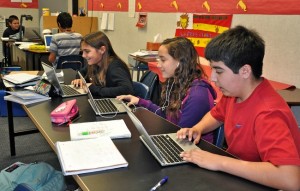 The new event is geared at generating awareness and meaningful exposure to the world of computer science.

“Every Chaparral student received an introductory one-hour lesson and a chance to try coding during their math classes,” Math and Technology Teacher Denise Loera said.

“Today, we are all surrounded by technology. Commerce, communication, entertainment and more, we all rely of computers. Yet, very few of us know how they actually work,” according to the code.org website.

“Computer science education is an increasingly important foundation for success, and everybody can benefit from learning the basics,” Loera added.

Chaparral 6th -8th grade students logged in a total of 1,297 hours of coding during the event.

“The Hour of Code was tremendous. It was well received by staff and students alike. Mrs. Loera and our Math Department got behind the idea to do this and our kids ran with it. This is a perfect example of what happens when teachers challenge their students with creative activities that motivate them to go outside of what they already know,” said Principal Ron Thibodeaux.

The Hour of Code allowed students to program codes designed for students by engineers at Google, Microsoft, Twitter, Facebook, Khan Academy and others.

All of the math teachers at Chaparral worked as a team to launch a successful Hour of Code in their classes. The educators previewed and then practiced their own coding skills before presenting it to students.

No previous experience was required for the self-guided activities that empowered students to learn coding at their own pace.

They were able to use Light-Bot, CodeAvengers, Scratch-Angry Birds and Khan Academy.

Students in Loera’s 7th grade math class worked individually and helped each other during the tutorial. They also had lots of questions for their tech-savvy teacher.

“Coding teaches them to think and collaborate,” she added.

Students were immediately engaged as they logged in and began working on the level one coding patterns.

“There’s this little light bulb code button that lights up the blue squares. I just feel like it really challenges you because it’s all about putting yourself in the robot’s position,” said Jeffrey Ortega.

“It tells you how many moves we have and how many boxes we have to light,” he explained.

“We’re opening up the opportunity for them to be curious.” Loera said.

The students also learned that careers in computer science are among the highest paid college degrees and computer-programming jobs are growing at two times the national average.

“Although it’s one of the highest paying careers, we have a shortage of coders,” Loera added.

In just an hour, some of the students could see a future career in coding.

Cheng said she has always liked computers, but never thought she would be coding. And she liked it.

Brenna Crandall, age 12, was also excited about the new adventure of coding. She said she’d like to work at Facebook.

“It’s not just about the money. I like coding because I’m good with technology. It’s so simple for me,” she said.

“I’ve always liked building. This is a lot more interesting than playing a game or going shopping,” Crandall added.

The students also found out they could practice coding at home.

“I’m encouraging them to share this coding experience with their parents, brothers, and/or sisters,” their teacher said.

Loera also advises an after-school Coding Club that meets each Thursday. The members served as student advisors during the Hour of Code.

“All of our Coding Club members did a fantastic job supporting the math teachers and students with any troubleshooting and simply providing a positive experience in coding,” Loera said.

There are approximately 20 students in regular attendance for the Coding Club, yet only three are females.

“To me, that goes parallel with the worldwide published data. There are not enough programmers going into this field and there are certainly not enough females. One of the Microsoft founders announced that there is a shortage of computer programmers, predominately females. And although the universities are offering these courses, it is unfortunate that they’re not filling up,” Loera said.

At the end of the hour Loera gave several students candy for breaking the code.

“It took me this long to finish, but I finally did it,” Linda Beltran said. 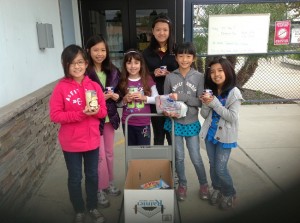 “I want to help the homeless have all the things that we have,” said Faith Renova.

Principal Jennifer De Anda reported that the drive was a success with over 16 boxes of canned goods collected.

“We’ve been getting a lot of cans.  I am happy that Vejar has been able to help the homeless,” Renova added.