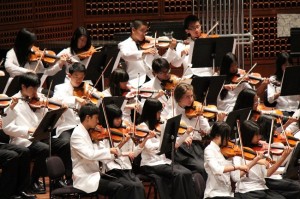 The Chaparral Middle School Sinfonia Orchestra took the top award at the San Francisco Festival of Gold held March 17. Chaparral’s 8th grade musicians were awarded 1st Place and performed an encore concert for the bands, orchestras and choirs at the national event.

“It felt great playing at such a grand hall, and it was a great experience performing with people that I had just met,” said violinist Josephine Kim.

The performances took place at the renowned Louise M. Davies Symphony Hall. Five elite middle and high orchestras from California and Arizona were invited to participate in this year’s event.

“This was without a doubt the best performance ever by a Chaparral Orchestra.  The students really stepped up to the challenge and it paid off.  I am so proud of every one of these kids!” said Conductor Greg Rochford.

The students had the opportunity to work with one of the festival judges, Dr. Andrew Dabczynski, from Brigham Young University who said they “have something very special here.”

Fifteen Chaparral students were also selected to be part of the Festival Honor Orchestra comprised of the best players from all of the participating schools.

“Performing in the Honor Orchestra was fantastic because I had the opportunity to meet great musicians around my age,” said bass player Pilar Alcazar.

Cellist Joyce Wu said the group played their very best at the concert.

“I knew this was something that we wanted to do well because not many kids at this age get to do what we did. Overall, the trip and performance is an experience that I truly cannot forget,” she said.

“Competing in the Festival of Gold and playing in the Davies Symphony Hall was both an honor and a once-in-a-lifetime experience,” said cellist Grant Wu.