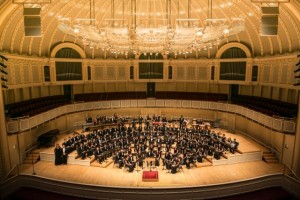 The South Pointe Middle School Band performed at Chicago Symphony Hall during the Festival of Gold.

the South Pointe Middle School Band recently performed in the Heritage Festival of Gold at the renowned Chicago Symphony Hall.  South Pointe was the only middle school ensemble among 22 high schools at the “Windy City” concert.

“We were the only band out of eight there to receive a standing ovation!” said Director Susan Willmering.

The 116-member group qualified to perform by submitting a recording and from consistent high scores during past Heritage Festivals.  During their Chicago experience, March 28-April1, the musicians participated in three clinics and three master classes at Northwestern University.

South Pointe students also toured the city. They trekked to the top of Willis Tower, walked out onto the glass, and gazed out at the 103-story city view

They took in the Cloud Gate sculpture, unofficially dubbed The Bean, at Millennium Park; visited the Museum of Science and Industry where students controlled a three-story high tornado; saw an exciting Blue Man Group concert, and more!

“It was an amazing experience for everyone involved,” Willmering said.