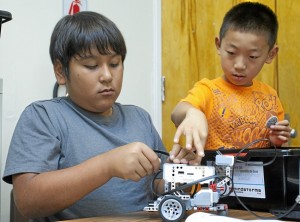 Ecolab presented $37,000 in grants to Rowland Unified teachers on Thursday at its plant in Industry. The grants represent an 8 percent increase over the money donated last year to area educators.

“We believe in giving back to the community,” said Logistics Manager Lynda Bobka. “We want to invest in our students, who may actually work with us in the future.”

The company official felt “lucky” to be associated with the Visions for Learning Grants program since it began in 1997. The grants have grown steadily over the years.

“The money has paid for everything from a kindergarten playground to instruments for a mariachi band,” Bobka noted. “We get great satisfaction from helping our local teachers fund special projects.”

Individual grants range up to $3,000. This year, 23 projects were funded by Ecolab.

Science took the top spots, with both Villacorta Elementary in La Puente and Shelyn Elementary in Rowland Heights receiving nearly $3,000 each for robotic kits.