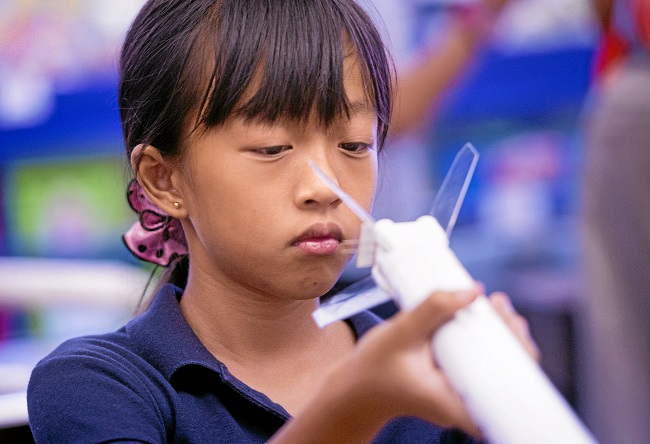 Baldwin Academy students got a chance to build their own SpaceX rockets, thanks to the Los Angeles aerospace company and the Union Pacific Foundation.

SpaceX recently won a $2.6 billion contract to build rockets to carry astronauts to the International Space Station for NASA.

But last week, the lucky fifth-graders got the chance to launch the SpaceX rockets they have been working on after school for the past five weeks. The athletic field became their makeshift launch pad in Hacienda La Puente Unified.

“SpaceX has been a major sponsor of the Youth Science Center,” agreed the center’s chairman Ron Chong. “They gave us 100 SpaceX rocket kits for our students to assemble. And they’re a $5,000 silver sponsor for our annual dinner on Nov. 14.”

Model Rocketry Instructor Lyle Majeska recommended the Valinda school. He lives just down the street from the school that his own son attended.

“I thought the students would learn a lot by building their own rockets,” Majeska explained. “The model rocket classes are very popular at the Youth Science Center in Hacienda Heights.”

During the afterschool class, the fifth-graders learned about aerodynamics and thrust to build missiles that will actually fly. They even added parachutes to the little capsules.

“The students were selected based on their teachers’ recommendations,” said Principal Lila Picado. “We wanted self-starters, who could work independently on the rockets.”