The senators — Dr. Richard Pan, a pediatrician who represents Sacramento, and Ben Allen, the former board president of the Santa Monica-Malibu Unified School District who represents much of the Westside and a portion of Torrance — would not say Tuesday what sort of changes their bill proposes.

But the state’s vaccination rate has raised concerns amid one of the worst measles outbreaks in 15 years.

Current California law allows parents to skip vaccinating their children under what is called a personal belief exemption. Parents who oppose vaccines must receive information by a health professional, unless their decision is based on religious belief.

More than 13,000 kindergartners are not vaccinated, according to published reports.

On Monday, the federal Centers for Disease Control and Prevention noted there were 102 measles cases in 14 states, including New York. The outbreak stems from an infected visitor to Disney Parks in late December, and cases then spread across the Golden State. Most are in California, where there are 92 cases statewide. Almost 20 percent are in Los Angeles County. An update is expected to be given on Wednesday during a news conference by the Los Angeles County Department of Public Health.

While some school districts are telling unvaccinated children to stay home and a child care center in Santa Monica that reported one case remained closed, the Los Angeles Unified School District said there are no confirmed cases.

Measles vaccines have been available in the United States since 1963, and two doses have been recommended for infants since 1989.

The vaccine, which prevents measles, mumps and rubella, is 99 percent effective, but 1 percent of those who are immunized can still get sick, health officials have said. Those who are concerned about their safety can have a blood test to check their immunity.

On Friday from 9 a.m. to 11 a.m., more than 150 Transitional Kindergarten, Kindergarten and First Grade students at Hurley Elementary will receive a free dental check-up at the “Give Kids a Smile” event. Sponsored by the Chinese American Dental Society of Southern California, dentist Dr. Chester Jeng, DDS, JD, will be on hand to provide free dental screenings to students.

For more information about the “Give Kids a Smile” event, please contact: Dr. Chester Jeng DDS, JD, President of the Chinese American Dental Society of Southern California at (562)691-0738 or visitwww.cadssc.org. 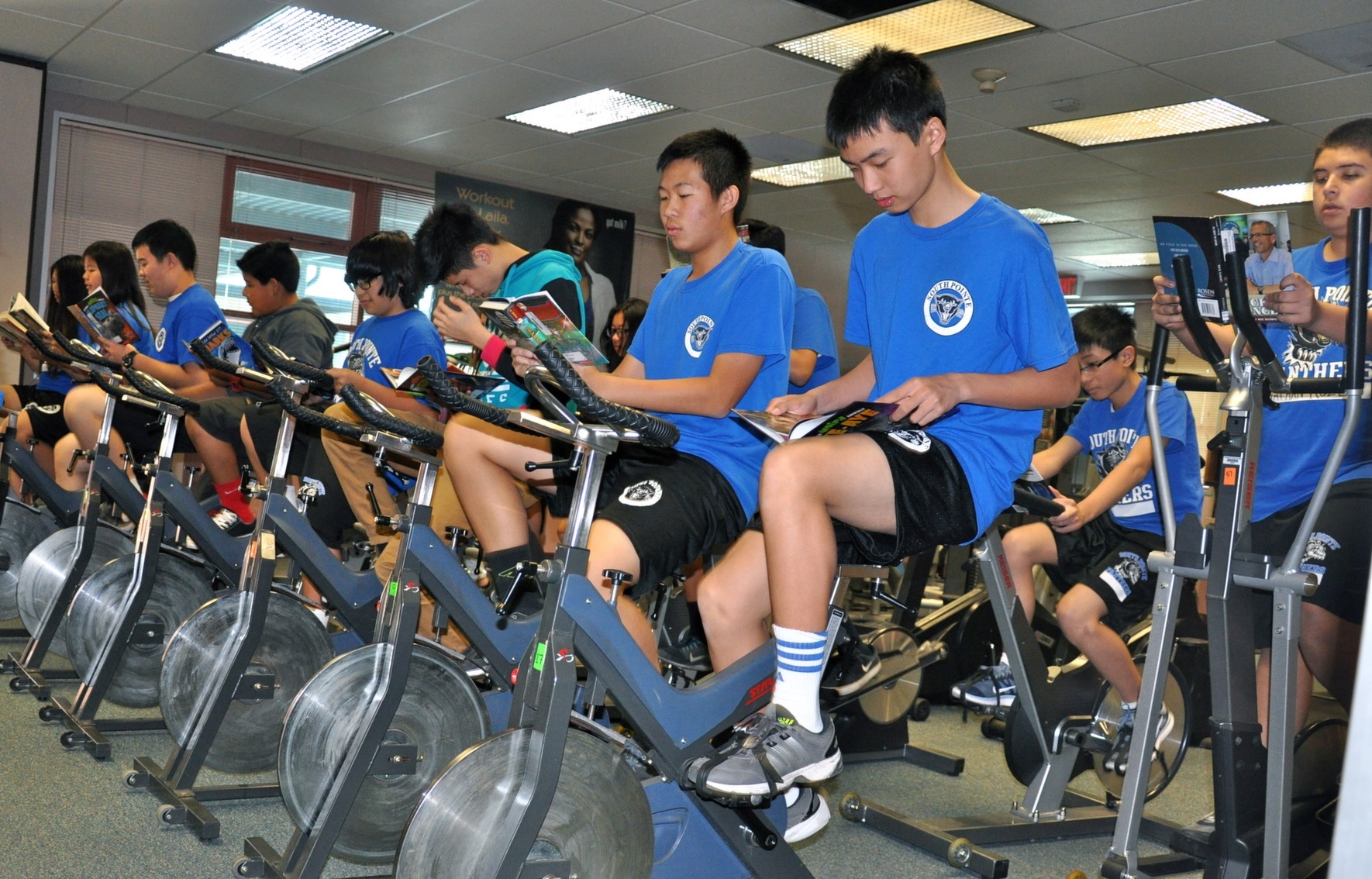 South Pointe students are benefitting from the new Read and Ride program.

“Our teachers read an article that said if you read while you’re working out you’re brain will actually imprint the information a little bit more,” Principal Susan Arzola said.

P.E. teachers thought it would be perfect for the 30-minute silent reading called AR (Accelerated Reader).

“We began playing with the Read and Ride program at the end of last year and decided to make it official in August,” explained P.E. teacher Ann Schnoor.

Every class is in the fitness room once a week. P.E. teachers now rotate the schedule so students climb on exercise bikes to Read and Ride twice each month.  The 6th-8th grade students get fit with cardio push music during Week 1. They stand up, tighten tension, pedal, sit down, and repeat.

“The kids love the diversity of the days.  We give rewards to anyone who rides over 12 miles at a time.  Believe me, that is tough.  Yet, we have at least 10 every period who achieve that!” Schnoor said.

The room is quiet during Read and Ride weeks. “I like the peace and quiet while I read. It gives me a chance to think about a lot of stuff.  And it helps with my multitasking,” said Amir Hunter, age 14.

“You can conserve time and do cool stuff at the same time,” said 8thgrader Christine Wan, age 13.

“So if you’re studying for a test that might be a good time to read and ride as you study because your brain will start putting those tracks down in your head and you’ll remember it better,” Arzola said to students in an 8th grade class. “It will make you smarter in the end!”