The Pomona Unified Board of Education approved Welker’s appointment during its March 3 meeting.

“Diamond Ranch and its athletics program has been anxiously anticipating Coach Welker’s arrival and we are pleased that he is here,” said Board of Education President Andrew Wong. “It’s exciting to know that the Panthers football program will be headed by such a talented athlete and coach, who can be a role model to our student-athletes and lead them to victory.” 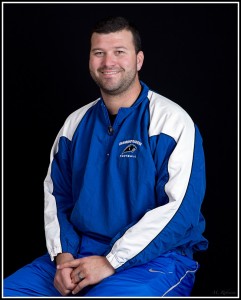 Welker – an avid four-sport athlete who earned multiple varsity letters in football, basketball, baseball and track and field while at Notre Dame High School – has been coaching football for the last six years. He will begin serving as Diamond Ranch’s head coach immediately.

“I am thankful for this great opportunity to be the head football coach at Diamond Ranch,” Welker said. “This is a program with a rich tradition of producing high quality student-athletes, but more importantly, high quality people. I’m looking forward to teaching our players how to strive for excellence and success, both on and off the field, by giving a championship effort in everything we do.”

Welker, who holds a master’s degree in sports management from Jacksonville State University, launched his coaching career at University Lab High School in Baton Rouge, La., as the co-offensive coordinator and quarterback coach in 2008.

Throughout his coaching career, Welker has helped more than 50 young men accomplish their goal to play football at both the collegiate and professional levels.

“I am excited to welcome Jimmy Welker to the Diamond Ranch High School football program,” Principal Suzanne Ripley said. “He brings a wealth of experience, knowledge, energy and commitment. He is enthusiastic about our four pillars of leadership, character, academics and community and he is laser-focused on taking DRHS to the next level in high school football.”

In addition to his achievements as a coach, Welker is a stellar athlete.

After graduating from high school, he was offered the opportunity to play quarterback at Louisiana State University, reaching his goal to play at a Top 25 National Collegiate Athletic Association (NCAA) college football program. During his college football career, the team boasted a win-loss record of 43-9 and included LSU’s clenching of the 2007 College Football National Championship over Ohio State.

Welker played quarterback in the Arena Football League for the Tulsa Talons in 2009 and the Bossier-Shreveport Battlewings in 2010, accomplishing his goal to play football professionally.

“It is our pleasure to welcome Jimmy to the PUSD family,” Superintendent Richard Martinez said.  “Jimmy’s sense of professionalism, strong work ethic and passion for football serves as a great source of inspiration to our high school athletes. We wish him and the Panthers a successful season in the fall.”