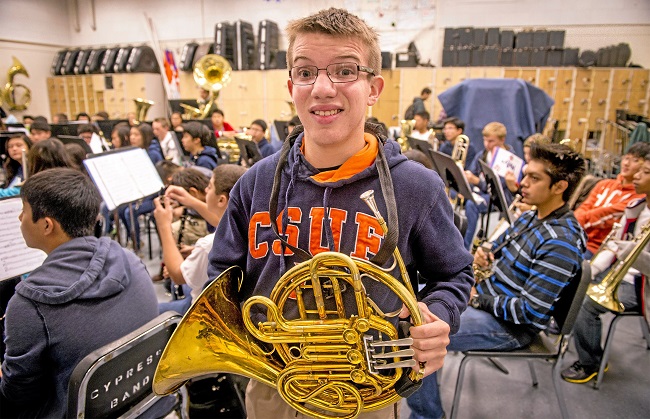 Brent Dillard can’t wait to march down Colorado Boulevard on New Year’s Day with the Cypress High School Band. The 15-year-old plans to walk the whole 5.5 mile distance, even though he suffers from cerebral palsy.

“We have our own inspiring story in Brent. He has worked tremendously hard to march in the Rose Parade,” said Cypress band director James Quirion. “Brent has become an true inspiration to me and his fellow bandmembers,”

Dillard has always wanted to follow in this father’s footsteps by joining the Cypress Centurion Imperial Brigade. A grand name for a 233-member band with a “big” sound.

“My dad played the clarinet and tuba in the marching band,” Dillard noted.

The teen chose the French horn for its rich sound. And he can play it with his one good hand, using the other to support the bell of the brass instrument.

The band took the field after school last week to rehearse for the grand parade. Under a cold threatening gray sky, Quirion put his centurions through their paces.

“Beginning Saturday, we start our marathon rehearsals, practicing from 8 a.m. to 5 p.m. every day,” said the enthusiastic band leader, who marched in the 101st Tournament of Roses Parade as a trumpet player with the Santa Ana Winds Youth Band.

He was 16 years old at the time, but he has always remembered the experience, and now he wants to share it with his high school students.