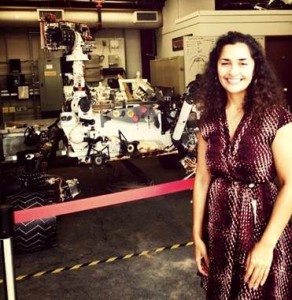 Two engineers from NASA’s Jet Propulsion Laboratory in Pasadena will talk to Shelyn Elementary  students this morning in Rowland Heights.  The engineers will discuss their work on the Curiosity Mission to Mars.

Dr. Anita Sengupta will explain her work for Curiosity’s entry, descent and landing on the Red Planet.  On Aug. 5, NASA landed its most capable robot on Mars. The Mars Science Laboratory (MSL) mission placed 2,000 lb rover, the size of a compact car, on the plains of Mars.

The rover will search for organic compounds, study the climate and geology, and continue the search for life.  One of the most challenging aspects of the mission, from an engineering perspective, was safely landing the rover on the surface.

The entry descent and landing (EDL) system used a heat shield to accommodate its hypersonic entry conditions, followed by a supersonic parachute, and eight retro rockets for the powered descent phase.

For its final terminal descent, a maneuver called the sky crane was used where the rover was lowered on tethers for touchdown. The JPL engineers will  talk about the motivation for Mars Exploration and how the MSL EDL engineering challenges were tackled with computational modeling and cutting edge experimental techniques.