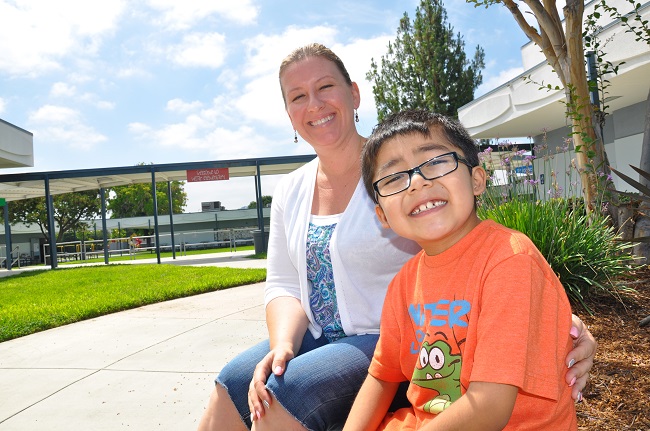 Vejar Elementary hosted a year-end “Have a Heart” fundraiser to help a young student in need of a new heart in Walnut.
The school and community campaign brought in $2875 to help with expenses for 3rd grader Andrew Osorio who is on the national heart transplant list.
“Thank you to the Vejar family and community for their support!” said Principal Jennifer De Anda. 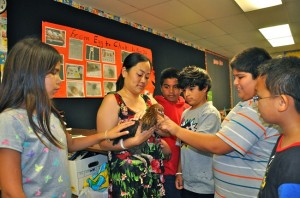 Students like their two-month-old classroom pet named Number Seven. They cared for the egg until it hatched. (Photo by Kelli Gile)

Top prizes were awarded to their Grape Expectations sawhorse display, a Lion farm animal, and Classroom Garden bounty of fruits, vegetables, and flowers.  “The kids came up all the adjectives to describe why grapes are good,” said Teacher Jennifer Troudy.

The teacher printed out words including Sweet, Raisins, Dulce, and Jelly that were nestled among decorated vines and bunches of grapes.  The From Egg to Chick by Room 26 entry earned an additional blue ribbon.

The project chronicled the 21-day adventure of the little chick named Number Seven who hatched in the class.  Students love to pet the two-month-old spunky clucker who often flies around the classroom.

“He’s funny because he walks super fast and pecks at our shoes and sandals!” one student said.

Each day, he follows Instructional Aide Helene McDonald down the hallway to the nearby garden. Lucky Number Seven chomps on pesky pill bugs that like to invade the lush greenery.

McDonald credits the successful crop to  fresh coffee grounds provided each day by a local Starbucks and the tender care provided by the students in Room 26. A three-foot tall Tin Man Scarecrow created from empty coffee cans earned a 4th place ribbon.

“I am so proud of my students!  They worked hard all year to make our garden beautiful and I am so impressed with their garden knowledge,”Troudy added. 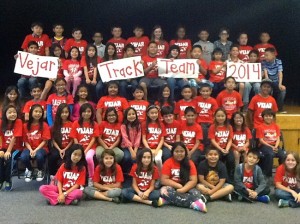 Vejar Elementary students participated in the 2014 Mt. SAC Relays on March 22. The runners proudly showed determination and skill during the annual race day.

Fifty-five members of the school’s Track Team practiced for several weeks before the big day. And they wore special red team t-shirts during the track and field events held at Hilmer Lodge Stadium in Walnut.

“All our students did a great job,” said Principal Jennifer De Anda.

Every participant wins pins and ribbons at the Mt. SAC relays.

Parent volunteers helped pass out water and energy bars during the event. The kids enjoyed pizza and hamburgers when they were finished.

A special thanks to the numerous coaches and parent volunteers for their commitment to the team and to local business that donated snacks and food for the young athletes.