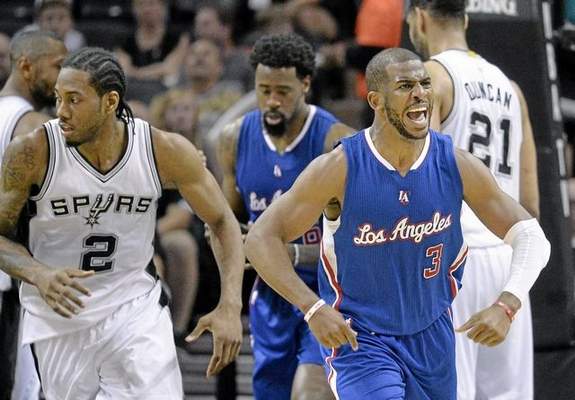 The difference between a Clippers debilitating loss or an inspiring win in their 2-2 first-round series to San Antonio traces to one thing. With Rivers calling the Clippers and Spurs “evenly matched” and describing his opponent as “really fundamentally sound,” he and his players echoed after Monday’s practice that urgency will play the main factor in determining the outcome of Game 5 on Tuesday at Staples Center.

“You have to be ready to play and ready to sustain play in this series,” Rivers said at the Clippers’ practice facility in Playa Vista. “Even in the middle of a game, you can’t take a break. When you take a break, they make a run. When they take a break, we make a run.”

For better and for worse, the Clippers experienced how such an approach can determine the game.

After opening the series with a 107-92 Game 1 victory with a strong supporting cast and unmatched defensive effort, the Clippers folded in a 111-107 Game 2 overtime loss that featured plenty of mistakes in the waning minutes. San Antonio followed that up with a 100-73 Game 3 win on Friday in San Antonio, an embarrassing loss that prompted the Clippers to show up with more urgency in a 114-105 victory on Sunday in San Antonio.

“It shouldn’t have taken us getting beat by 30 and the loss we had in Game 3 to come out with what we had in Game 4,” Clippers forward Matt Barnes said. “If we’re going to make a real run in the playoffs, we nee to be consistent night in and night out. Luckily, it did wake us up and we did come out with a sense of urgency. We know what we have to do to beat this team. We have to consistently play that way.”

Yet, Rivers maintained “we have to play even better,” mindful that the NBA’s defending champions will likely make adjustments that it lacked in Game 4. After all, the Spurs followed up a 36.6 percent mark from the field in Game 1 by shooting 46 percent. In Game 4, San Antonio’s Danny Green, Tiago Splitter and Marco Belinneli missed a combined 13 shots.

Meanwhile, Rivers noticed that in “every game, someone has played desperate,” including Paul and Griffin in Games 1 and 4 as well as San Antonio’s Kawhi Leonard and Tim Duncan in Games 2 and 3.

“The more evenly matched the teams are, the more that will come into play,” Rivers said. “We have to have it. You lose your focus sometimes. If you do in this series, it’s going to cost you.”

San Antonio Spurs will keep fouling Clippers’ DeAndre Jordan — and why not?