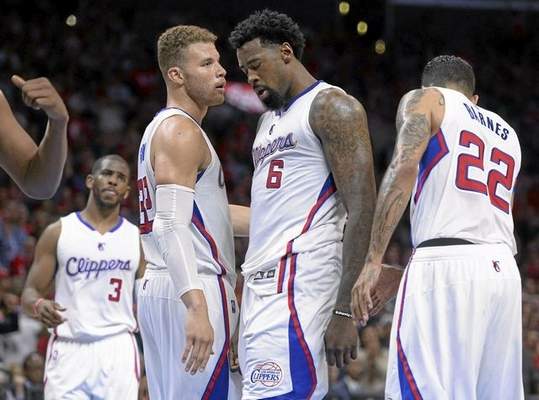 Yet, both vowed they will suit up when the Clippers host the San Antonio Spurs in Game 5 of their first-round series on Tuesday at Staples Center. The series is tied 2-2.

“I’m feeling fine minutes wise,” said Griffin, who has averaged 22.3 points on 46.8 percent shooting and 13.3 rebounds through 41.3 minutes in four playoff games against the Spurs. “As for other nicks and bruises here or there, I’m fine. It’s just part of the playoffs.”

Griffin appeared in pain and struggled using his right arm to inbound the ball on the final possession of the Clippers’ 114-105 Game 4 win over San Antonio on Sunday at AT&T Center. Meanwhile, Barnes reported his injury stemmed from an unnamed opponent set a screen on him and he arm flailed out as he moved. There was a foul call, right?

“I don’t get foul calls,” Barnes joked, mindful of his reputation as an enforcer. “I only get fouls called on me for breathing on people.”

RELATED:
Tim Duncan’s enduring consistency is hallmark of one of NBA’s great all-time forwards
San Antonio Spurs will keep fouling Clippers’ DeAndre Jordan — and why not?
Game 4 victory a step in the right direction for Clippers and Lob City