Blocking shots is nothing new to Clippers center DeAndre Jordan. He averaged 2.3 during the regular season, second in the league to Miami’s Hassan Whiteside, who averaged 3.68. Jordan and his teammates combined for nine blocks during their 102-81 victory over Portland on Wednesday in Game 2 of their first-round playoff series at Staples Center. Jordan had three blocks and Cole Aldrich and Jeff Green had two apiece. Here is one of Jordan’s that came during the first half Wednesday. Check it out:

– Chris Paul began this game 0 of 9 from the floor. He went 2 of 15 in the first half. He finished 8 of 23, meaning he made eight of his final 14 shots. Consecutive 3-pointers by Paul down the stretch helped seal Miami’s fate. The clutch baskets no doubt made it easier for Paul to forget his early shooting woes. Paul made a 5-footer for a 100-88 lead with 53 seconds left, for the final nail in the coffin.

– The Clippers did not shoot particularly well. They made 45.7 percent of their field goals overall, 36 percent (9 of 25) from 3-point range. They were not good at all from the free-throw line, making just 51.5 percent (17 of 33). DeAndre Jordan was 3 of 14. But the Clippers still won because they took care of the ball, committing just six turnovers, and because they helped hold Miami to 39.8 percent shooting; the Heat also had 13 turnovers, with Dwyane Wade and Goran Dragic making four apiece.

– The bench had another strong showing, outscoring Miami’s 46-25. Jamal Crawford had 20 points, Wesley Johnson scored 10 and Lance Stephenson nine. Johnson and Stepheson both shot 4 of 5, with Crawford going 7 of 19 from the field, just 2 of 7 from beyond the arc.

– Speaking of the bench, Cole Aldrich pulled down 11 rebounds in just 13 minutes and 18 seconds of action. Too bad he couldn’t make his free throws, going 1 of 5 from the line. He had two baskets and scored five points.

– Hassan Whiteside entered this game averaging a league-high 4.0 blocks. But Whiteside played his third consecutive game off the bench after he missed the previous six with a hip injury. He played just under 17 minutes – he averages 28.6 – and did not have a block. When Whiteside is on, he can be a dominant force. It was just Friday when Whiteside had 10 points, 10 rebounds and 10 blocks for a rare kind of triple double. So for him to have no blocks in this game is kind of a big deal. He did have 10 rebounds to go along with 10 points.

Statistics show Chris Paul made 8 of 23 shots from the field during the Clippers’ 100-93 victory at Miami in a Sunday matinee. What the box score doesn’t show is that he missed his first nine shots before finally getting one to go in.

Paul ended up scoring 22 points and hit a couple of big 3-pointers down the stretch to help the Clippers (34-17) to their 17th victory in 21 games without Blake Griffin.

Paul intimated afterward he was confident the early struggles wouldn’t continue. He made eight of his final 14 shots.

“Yeah. I was frustrated early because it wouldn’t go in,” Paul said. “Luckily, and unfortunately, that’s not my first time missing a bunch of shots like that early. I just sort of knew if I just kept shooting, that would change.”

– This victory was the Clippers’ 10th in a row, ninth without the services of Blake Griffin (partially torn quad tendon) and first without DeAndre Jordan (pneumonia). That snapped Jordan’s 360 consecutive games streak, which had been the longest current streak. Griffin figures to still be out when the Clippers host Sacramento on Saturday. Jordan is listed as questionable.

– Cole Aldrich is getting better and better. Starting for the first time this season because of Jordan’s absence, he scored a team-high 19 points on 7 of 14 shooting. Aldrich also pulled down seven rebounds, doled out three assists and made a steal in 24 minutes, his longest stint of the season.

– Paul Pierce rebounded from two horrible shooting games to score 15 points on 6 of 10 from the field, 3 of 7 from 3-point range. Pierce had shot a combined 3 of 16 his previous two games, 1 of 12 from beyond the arc.

– Josh Smith had a DNP next to his name in eight of the previous 10 games. With Jordan out, he played 20 minutes off the bench and scored nine points on 4 of 11 shooting. He also grabbed three rebounds, had one assist and made three steals.

– The Clippers had just eight total turnovers – seven individual, one team. The Heat had 24. Some of that was Miami’s own sloppiness, some of it was the solid defense now being played on a more consistent basis by the Clippers. 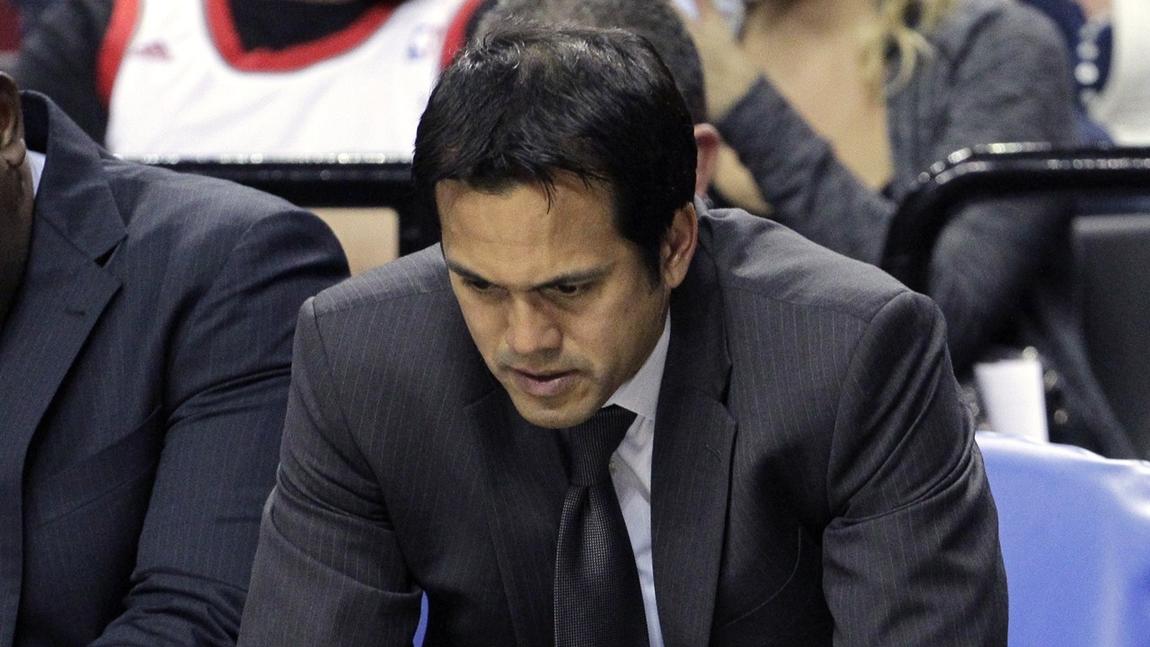 One thing about NBA coaches, you won’t hear them tear down an opposing team very often. Part of that is probably mutual respect among coaches, part of that is not giving an opponent any chalkboard material.

Prior to Sunday’s Clippers game against the Miami Heat, who upset the Clippers with a 104-90 victory, Miami coach Erik Spoelstra was asked what he thinks the Clippers might be missing for a potentially long post-season run. The question, of course, was based on the inconsistency of the Clippers. Spoelstra’s response was almost predictable.

“Why is there something missing?” Spoelstra said to the inquiring reporter. “It’s competition. At the end of the day, you never know. You get in a seven-game playoff series, anything can happen, especially after you get past that first round. They have enough, and the Western Conference is very competitive.”

When the Clippers bolted to a 19-6 lead midway through the first quarter Sunday against the visiting Miami Heat, it appeared the Clippers would march to their third consecutive victory. But as quickly as they got that lead, it disappeared and never materialized again in the Clippers’ 104-90 loss to a Heat team that is now just 16-21.

“Our defense sort of let up tonight,” Paul said. “We were scoring pretty effortlessly and I guess we thought it was going to be like that all game.”

The Clippers, now 25-13, next play Wednesday night at Portland, which took a 29-8 record into its Sunday night game against the Lakers, also at Staples Center.