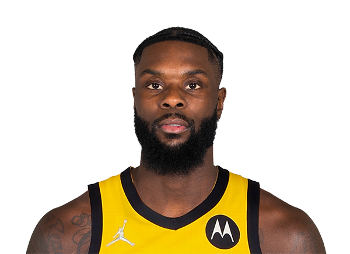 The Clippers on Thursday afternoon will introduce newly acquired Lance Stephenson to the Los Angeles media at a news conference.

Doc Rivers, Clippers coach and president of basketball operations, on Monday traded small forward Matt Barnes and forward/center Spencer Hawes to the Charlotte Hornets for Stephenson, who at 6-foot-5 can play both guard positions and small forward.

Stephenson, just 24, played his first four seasons with the Indiana Pacers. His final season with them was his statistical best as he averaged 13.8 points, 7.2 rebounds and 4.6 assists in 2013-14.

Stephenson signed with Charlotte after that season, but he did not follow up his previous season with anything similar. He averaged 8.2 points, 4.5 rebounds and 3.9 assists in his only season there. He started just 25 of 61 games in which he played.

– Blake Griffin took only eight shots for the second consecutive game. Sure, he played fewer minutes in those two games – 29 and 27 – because both games were routs; the other game was Wednesday at New York, where the Clippers blasted the Knicks 111-80. But that doesn’t account for the disparity between taking 21 and 19 shots in the previous two games in 37 and 36 minutes, respectively. Griffin needs to stay aggressive. He’s averaging 17 shots per game on the season.

– Spencer Hawes, who has struggled mightily this season, had seven points and eight rebounds off the bench in 19 minutes. The rebounds were one more than the 7-foot-1 reserve had over the previous three games combined. That’s a good thing. Now, he needs to keep on doing it.

– Matt Barnes had another solid game in what has been his best month of the season. He scored 15 points while pulling down four rebounds and making four steals with three assists. Barnes shot 4 of 8 – 3 of 7 from 3-point range. He’s averaging 10.1 points on the season, but 12.9 in March, during which he’s shooting 43.8 percent from beyond the arc.

DeAndre Jordan throws down a dunk for Clippers in their rout of New York on Wednesday. Jordan had 14 points, 10 rebounds and five blocks/Photo by Mary Altaffer/Associated Press

– Blake Griffin and Chris Paul said ahead of this three-game roadie that this was a “business trip.” In other words, they’re playing two lousy teams and one mediocre team, so just go out and take care of business. They did that with the Knicks in this one, bolting to a 63-33 halftime lead and never looking back. The Knicks are now 14-58. Up next are the Philadelphia 76ers (18-54) on Friday and then the Boston Celtics (31-40) on Sunday.

– It was nice to see the play of the bench in this one. Austin Rivers led the team with 21 points on 9 of 10 shooting. That was big because Rivers had scored a grand total of 14 points in his previous five games. Spencer Hawes, who has really struggled, even got into the act with seven points on 3 of 6 shooting.

– It sounds like a broken record, but J.J. Redick had yet another fine game. He scored 17 points while making 7 of 11 from the field – 2 of 4 from 3-point range in just 22 minutes; the starters played fewer minutes than usual because of the lopsided nature of the game. Redick’s season scoring average is at a career-high 15.9. He is averaging 20.8 points in 13 games this month while shooting 48.8 percent overall, 41.9 from beyond the arc.

– It was kind of a weird game for point guard Paul. In 28 minutes he scored 11 points with 16 assists and four steals. But he committed five turnovers. Paul is averaging 3.1 turnovers this month, the highest of any month this season. His best month was December, when he averaged just 1.6. He’s averaging 2.4 on the season.

– After taking 19 of 21 shots, respectively, in his past two games, Griffin took just eight shots in this one. He made three for 14 points. He also had six rebounds, three assists and a steal. He’s now averaging 18 points, 8.1 rebounds and 4.8 assists in six games since his return from an elbow injury. He’s averaging 22.1 points, 7.6 rebounds and 5.1 rebounds on the season.

– It’s tough to win when your opponent shoots 60.7 percent (51 of 84) from the field, 57.1 percent (16 of 28) from 3-point range. That’s what the Mavericks did in this one. Suffice to say, the Clippers did not play defense they way they should have. They are now allowing
100.6 points per game, 19th in the league. That’s not to mention the 30-point loss was the Clippers’ most lopsided of the season.

– Spencer Hawes had another poor outing starting in place in Blake Griffin. Hawes scored just four points on 2 of 8 shooting, 0 of 3 from beyond the arc. He did have five assists. In his past five games the 7-foot-1 Hawes is averaging just 5.0 points and 3.2 rebounds while
shooting just 27.8 percent from the field, 26.7 from 3-point range.

– Chris Paul had four more turnovers, meaning he is averaging a very uncharacteristic 4.6 turnovers in his past five games. He’s averaging just 2.4 turnovers on the season.

– There was some good news. Matt Barnes played his fourth consecutive solid game since returning from a hamstring injury. He had 14 points on 5 of 12 shooting – 3 of 9 from 3-point range and is averaging 14.5 points while shooting 51.3 percent, 44.4 percent from beyond the arc in those four games. Barnes is averaging 9.9 points on the season with a 45.5 overall shooting percentage, 37.6 percent from long-distance.

– The Clippers (42-24) have 16 regular-season games left. This defeat tightened things up even more in the Western Conference. They are still in fifth, but are now 1 1/2 games behind fourth-place Houston (43-22) and sixth-place Dallas (42-25) is now just a half-game behind
the Clippers with seventh-place San Antonio (40-24) just a game behind them.

The Clippers on Monday night at Minnesota were without Blake Griffin (elbow) and Matt Barnes (hamstring) and lost Jamal Crawford (calf contusion) and J.J. Redick (ejected) during the game and still managed to defeat the Timberwolves 110-105 at Target Center. The Clippers finished their four-game road trip with three consecutive victories.

The Clippers will now come home to play host to the Portland Trail Blazers on Wednesday at Staples Center. The Clippers are in fifth in the Western Conference standings, just a half-game behind Portland (39-19).

– First and foremost, we have to acknowledge that the Clippers were without Blake Griffin, who has a staph infection in his right elbow and will have surgery Monday to get rid of it. He’s out until sometime after the All-Star break, the team said, and he has been replaced on the
Western Conference All-Star squad by Portland guard Damian Lillard. Staph infections are no laughing matter and can get serious.

– The losing streak has now reached four. The Clippers had not even lost three in a row under Doc Rivers since Rivers took over at the beginning of the 2013-14 campaign.

– Being that the Clippers (33-19) were such a depleted squad with Griffin out and starting shooting guard J.J. Redick missing his third consecutive game with back spasms – not to mention reserve forward Glen “Big Baby” Davis going down hard and playing just six minutes because of back spasms – it’s no surprise the Clippers did not play well on defense. The Thunder (26-25) shot 52.3 percent from the field, 40 percent (8 of 20) from 3-point range. OKC’s percentage would have been considerably higher had Russell Westbrook (19 points) not brought it down with a 6-for-19 shooting performance; Serge Ibaka made just 3 of 11, for that matter.

– Lost in the one-sided defeat no doubt will be the game had by point guard Chris Paul. He scored 18 points on 7 of 13 shooting with 13 assists, six rebounds, three steals and just one turnover in 36 minutes. The only negative was an 0-for-4 shooting day from 3-point range.

– Another good thing was the game had by Spencer Hawes, who started for Griffin. A starter much of his career before coming off the bench here in his first season for the Clippers, Hawes has struggled as a reserve. He scored 17 points. They were all in the first half, though. Still, he made 7 of 16 from the field, 2 of 5 from 3-point range. But he only had one rebound and that’s not going to cut if assuming he starts for Griffin until Griffin comes back. That’s one rebound in 35 minutes for a 7-foot player. The Clippers were outrebounded 54-29.