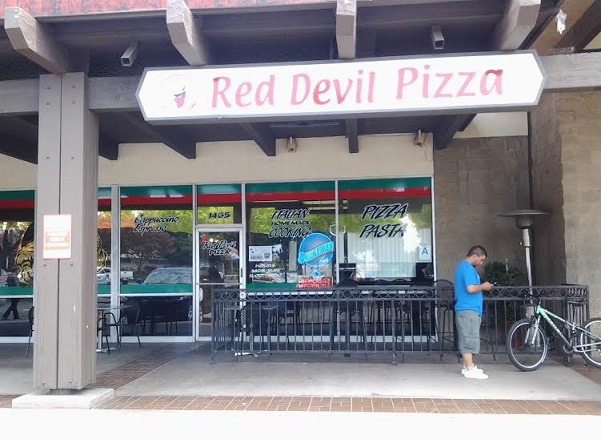 Red Devil is in the CVS Center near the old Vons, placing it across the street from the new Vons. Opened in 1973, Red Devil is a longtime La Verne favorite.

The interior is nicer than expected, with vintage-style Italian posters and such decorating the walls. Also, a “GoodFellas” poster autographed by Henry Hill. Although there’s a counter for takeout orders and paying, they have waitress service. A couple of gents near me were chowing down silently on large bowls of pasta.

Pasta dinners range from spaghetti ($9) to seafood linguine ($17); they also have sandwiches, beer and bottled wine up to $25. And, of course, pizza. I got one of the $8.50 lunch specials, a mini pizza with one topping (mushrooms) and a salad and soda or beer (iced tea, in my case).

The salad was iceberg but it was large, almost entree-sized, with cheese, olives and tomatoes. Not bad. The pizza was also large at 10 inches (2 inches larger than most mini pizzas), chewy and tasty. I took home three of the eight slices. It was a good deal for the price.

La Verne’s a good pizza town. Still gotta go back to Sal’s for a Sal’s Special, as some of you recommended.

*Update, August 2014: I returned to Red Devil so I could update this 2008 post with photos. Actually, I returned twice; the first time, a Monday night, the place was packed, so I left. I came back for lunch on a Sunday and the place was much quieter. I got a small Joey’s Special ($10.50), which has sausage, bacon, pepperoni, ham, mushrooms, onions and bell peppers. Pretty good pizza, light on the sauce, generous with the toppings, a medium-weight crust. Service was attentive. They also have 16 pastas on the menu, from $9 to $17. 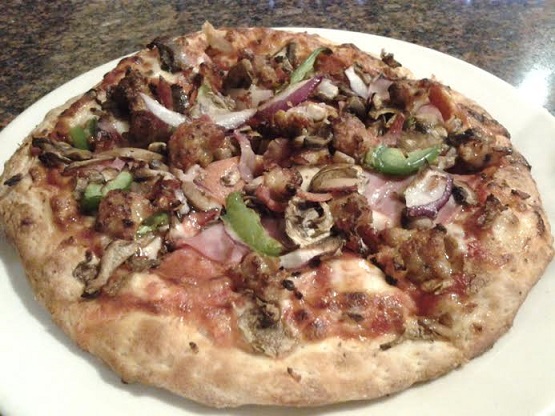