Based on my recent drives, I can offer these cautionary notes:

* At least as of Oct. 15, South Euclid Avenue in Ontario from a street I can’t remember to Riverside Drive is a hell ride. That was the day I had a lunch date at Taylor’s Cafe and found traffic slowed to a standstill, three lanes funneled into one, for massive reconstruction and installation of a new traffic signal. Maybe it’s cleared up now — I don’t dare drive back down there to check.

* In Montclair, Central Avenue is in pieces from the northern city limits to the 10 Freeway, near Montclair Plaza. Better they’re doing this work now than during Christmas shopping, but that doesn’t make me want to drive it.

* Similarly, Monte Vista Avenue near Montclair Plaza also has lanes narrowed and pavement torn out, although not as drastically.

Better to just avoid Montclair until further notice. Will you miss it? If you live in Montclair, or you really need new clothes at the mall, use your best judgment.

* East Holt Boulevard at Euclid Avenue in Ontario remains a pit of despair, five lanes squeezed into two. Avoid at all costs.

This traffic advisory has been brought to you by the forces of change.

Any other torn-up streets to avoid, readers?

After speaking Thursday at the Ebell Museum in Pomona about her role as Scout in the movie “To Kill a Mockingbird,” actress Mary Badham remarked in the presence of several attendees that “Mockingbird” was among the library books Sarah Palin allegedly tried to ban when she was mayor of Wasilla, Alaska.

As one attendee told me later: “Suddenly a gaggle of middle-aged women who overheard the statement huddled together and hissed, ‘We’ve got to tell David Allen!'”

And bless one for doing so. This correspondent offered me the “stunning revelation” about Palin’s alleged action. “Wow!!!” she concluded her tale.

An Internet search, however, proves the tale to be false. The short version is, there is a generic list of books perpetually questioned in the United States, and “Mockingbird” is on the list. But Palin’s “what if” comments to the local librarian apparently mentioned no titles specifically.

You can read a longer explanation at the rumor-debunking site Snopes.com.

Not that there aren’t plenty of other reasons to oppose Palin (wink, wink), but the book-banning thing has been overblown.

That aside, my source says Badham “was wonderfully received. A large and very appreciative audience included many high school students from throughout Pomona. Ms. Badham did an excellent job of relating old issues of prejudice and segregation to current events and contemporary political relevance.”

Four years ago, a man named Sunit Gupta, a psychic and astrologer in Pomona (www.sunitgupta.com), phoned me offering his prediction of the 2004 presidential election. What the heck, I bit. Gupta picked Bush and was, of course, correct.

He phoned again in late September to give me the worldwide exclusive on the 2008 election. What with one thing or another, we didn’t speak until Oct. 14, but he chose a candidate and offered some post-election insight. Can you stand the suspense until Sunday? I predict that you can.

Not only that, but we’ll have news of close shaves on the Ontario City Council, a correction to my recent mention of the International Bowling Hall of Fame and a gloomy piece of economic news from Ontario. All this in only (sob!) 16 column inches. How do we do it? Volume! 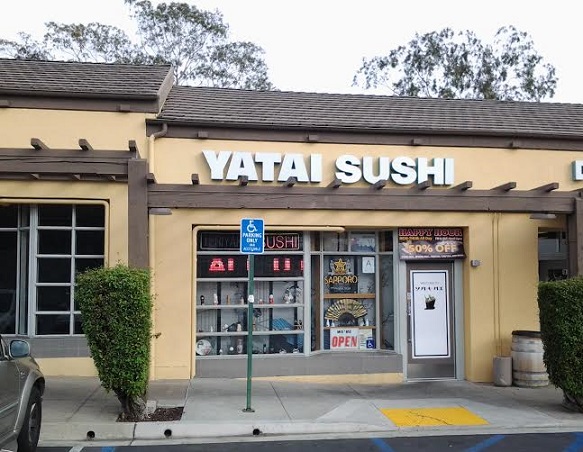 Yatai is in the winery center on the northeast corner, in a building between Souplantation and Bobby Baja’s. The interior is small, clean and colorful. Even though it’s “express,” the tables have waitress service.

This is far from a high-end sushi palace and, expectations adjusted downward, I opted for the Yakisoba Chicken ($6.95). This began with a small lettuce salad. The main course had noodles, teriyaki chicken and cabbage. I ate every bit.

Meanwhile, my friend had one of the lunch specials, the Alaskan Roll ($6.99) — salmon atop a California roll, baked — and thought it was quite good. I sampled it and agreed. Who knew? It came with a choice of two other items, the proverbial one from column B and one from column C; she got two pieces of salmon sushi and a Coke.

Yatai has a large array of sushi and sashimi, plus bento boxes, $6.99 three-item lunch specials and meals no pricier than $12.95.

Not fine dining, but a pleasant surprise.

Update: Yatai has since moved elsewhere in the same center to make way for a Fresh & Easy market. Photo is of the new location.

I got a phone call Tuesday about the opening of Fontana Park — that’s its name — from Amy Colbrunn, the assistant to the city manager. City Hall is very excited about the park and, like the library and the theater that opened earlier in the year, they invited me for a tour.

In fact, Mayor Mark Nuaimi had liked my column on the library so much, his entire speech at the ribbon-cutting consisted of reading my column. (Except for a lame joke of mine about how the chimes in the clocktower, which can play 200 songs, ought to include “Louie Louie.”)

An e-mail from Colbrunn followed later Tuesday with a personal message from Nuaimi.

Well, a tour of the park was arranged, and a column will appear Friday. At 39 acres, the park is quite impressive, and because of its location — north of the 210 and east of the 15 — and I imagine a lot of Rancho Cucamonga residents will make use of it too.

One detail among many that I had to cut for space is the leaf motif. It can be found indoors in carpet patterns, wall friezes and wallpaper and outdoors on the base of light poles and stamped in the concrete walkways. If you find them all, I wonder if you get a prize?

The gymnasium, at 13,000 square feet, has six basketball backboards and bleachers. It’s Fontana’s first city gymnasium. It still has that “new gym” smell. Which is far preferable to that “old gym” smell.

And there’s an aquatics center, skate and BMX park, playground, dog park, grand fountain, promenade and other features. The community center even has a juice bar.

Will the mayor do a public reading of this column? I tried to ignore that possibility as I wrote, making sure to include as many jabs as possible, including mocking the park’s bland name. If he reads it, I hope he leaves out the lamer jokes.

Councilwoman Sheila Mautz announced the event — in which police officers act as food servers, with the tips going to various nonprofit organizations — at Tuesday’s council meeting, urging people “to tip a cop, and tip a cop well.”

“Is that anything like tip a cow?” Mayor Paul Leon quipped.

“Jeff,” Leon said, indicating a police employee in the room, “would you like to come up and demonstrate cop tipping?” Apparently he didn’t.

Cow tipping is a prank based on the notion that, since cows sleep standing up, it’s possible to approach them in the dark of night and tip them over.

Ontario police are, of course, harder to tip because even in their sleep, they are on the alert 24/7. Right? Better to just give them money at Applebee’s.

Remember how the previously unknown Repertory Opera Company was going to perform “Don Pasquale” in Pomona?

Well, apparently the Sept. 14 show went off fairly well — so much so that there’s an encore.

The company will again perform “Don Pasquale” at St. Paul’s Episcopal Church, 242 E. Alvarado St., Pomona, one show only, this Sunday at 3 p.m. Tickets are $25 and reservations are recommended to (323) 969-4602. The website is www.repertoryoperacompany.org.

If you go, let me know if the fat lady sings.

Mary Badham, the actress who played the little girl, Scout, in “To Kill a Mockingbird,” will speak from 7 to 8:30 p.m. Thursday at the Ebell Museum, 585 E. Holt Ave., Pomona, as part of the Big Read program. She’ll talk about the role and the impact it had on her life. Admission is free.

Some of us saw Badham in Rancho Cucamonga in 2007 for that city’s Big Read. She’s a good speaker and if you’ve seen the movie, this will be worth your time.

(Incidentally, the Pomona Public Library will screen the movie at 1 p.m. Saturday, followed by a discussion contrasting the book and the movie.)

One thing you’ll notice during Badham’s talk is that she doesn’t have many specific memories of the film shoot. I think that’s something we tend to forget about child actors: They don’t have the memories an adult might. Most childhood memories are fragmentary and hers are no exception.

Most of what Badham will relate, and she said so herself in Rancho, is second-hand information, even though it involves her. (It’s still interesting, as are her stories about her lifelong friendship with Gregory Peck.)

I witnessed the same situation in Studio City in April when Jon Provost, who grew up in Pomona, talked about his role as Timmy in the “Lassie” TV show.

Provost had acted in movies as young as infancy. People in the audience eagerly asked him about his pre-“Lassie” work and didn’t quite grasp that he was a baby, toddler or very young boy at the time and, hence, doesn’t remember a thing. I suppose because he, and Badham, are preserved on film, their childhood seems more “present” than ours.

First off, while this won’t matter to anyone who reads my columns online, my column has moved again, this time back to Page A3.

One aspect of the move will affect everyone, even if it’s not obvious: Because my columns will no longer “jump” to another page, they have to be shorter.

At this point they’ll all be around 550 words. Previously they ranged from 600 to 700 or even 800. Last Friday’s column on used bookstores was on the high end and starting now I could print only about two-thirds of it.

So if you always thought I nattered on too much, this is good news. If not, well, I’ll adapt and you will too. (Or, I could answer one of those spam e-mails promising more “length.”)

As for the content, Monday’s Pomona council meeting was quiet, but there was a funny angle for those of us who follow Ontario council meetings. Elliott Rothman was absent, which left a motion to pass the consent calendar and adjourn the meeting in the hands of amateurs. And Mayor Norma Torres gave me a candid interview after the meeting that will be of high interest to Pomona voters.

And before I knew it, I was out of space. Upside: I already have plenty of leftover material for Friday!

Steve’s column is back as a blog, as noted in a recent column of mine. Here’s last week’s post, which includes a quote from yours truly, about Claremont’s drunken skateboarder. Forget Steve’s 82 mentions of the Inland Valley Daily Bulletin; we’re now up to 83!