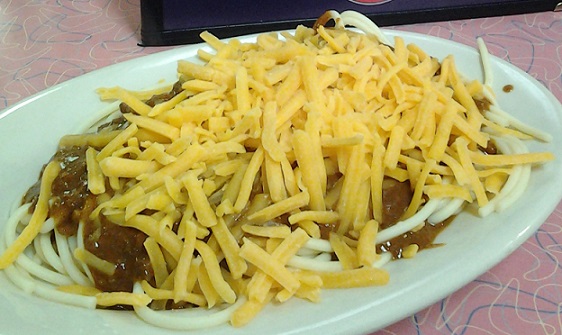 Chili mac, as photographed in May 2014 at Chili Mac’s Diner, St. Louis

Are you familiar with chili mac? According to Jane and Michael Stern’s book “Road Food,” it’s a Midwestern specialty: spaghetti noodles topped with chili.

I’d had it only once, years ago, but read about it in the Sterns’ book before my recent St. Louis trip and was intrigued. Seeing it on the menu at Crown Candy Kitchen, I ordered it. (Later I checked the book again and realized the Sterns had recommended the chili mac at a different establishment.)

Here’s what you get: a soup bowl filled with spaghetti and chili (no beans), and, if you want ’em, cheddar and onions. I did. Adding to the silliness, on the side you get a package of oyster crackers, those small, six-sided crackers that come with chowder or chili but, um, rarely with spaghetti.

Strange it may be, the platypus of entrees, but chili mac was actually pretty tasty. I cleaned my bowl. Anyone else ever tried this regional specialty, or another one of which most Californians would be unaware?

* St. Louis also has a diner named after the dish, which I tried on a 2014 trip home. Good stuff.